The rapid industrial growth over the past century has led to the increasingly critical problem of effluent treatment which is usually discharged into water streams. In this regard the capture of inorganic pollutants from such streams has commanded much attention owing to the severe biological hazards posed by their reactive contaminant species and the paucity of tenable materials/methods for safe disposal. Environmental regulatory authorities across the world have enlisted inorganic species, particularly prevalent in their oxoanion form, as priority pollutants. Especially, the capture of heavy metal species like Cr(VI), which is discharged from common industrial processes like metal plating, leather taning, pigment synthesis has been focussed. Likewise, Tc(IV) forms a major part of the waste stream generated from nuclear industries and is a challenging element to tackle on account of long half-life and fast mobility in the solution state. 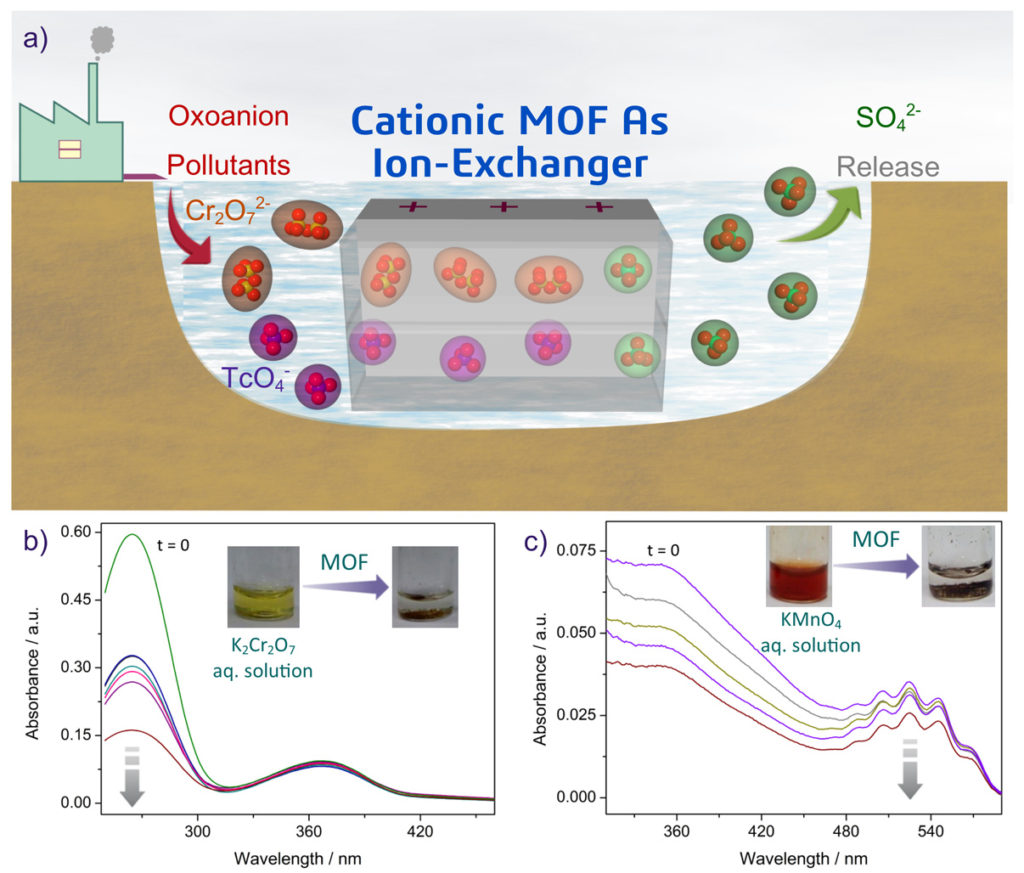 Fig. 1. a) Schematic illustration of toxic oxoanion capture by cationic MOF releasing free sulphate anions, b & c) UV-Vis spectra of the supernatant solution of b) potassium dichromate and c) potassium permanganate at different time upon addition of cationic MOF, (inset) photographs of the corresponding changes.

Among several methods trialled for applicability in this regard, ion-exchange based processes have been found to be much viable. Slow exchange kinetics and relatively poor selectivity of the currently investigated ion-exchangers has propelled the examination of newer materials and/or optimization of the currently studied systems. Metal-organic frameworks (MOFs) which are built from organic linkers and held by metal ions/clusters in an infinitely periodic manner have been sought for ion-exchange applications in recent years. The seemingly facile route for designing such materials functioning as ion-exchangers is to construct cationic MOFs having uncoordinated and easily exchangeable anions. Although some progress has been made in terms of control over design, these systems have not been found to be remarkably stable in aqueous and harsh chemical environments, which are real-time operating conditions.

To overcome this major drawback of poor hydrolytic stability and to develop cationic MOFs for oxoanion pollutant capture, we have presented a strategically simple route by incorporating water compatible metal salts and a higher dentate ligand for obtaining higher dimensional frameworks. We additionally hypothesized that using salts of sulphates (SO42-) and phosphates (PO43-) can facilitate the exchange of heavy-metal oxoanions owing to the similar tetrahedral geometry of the incoming & outgoing species (Figure 1a). Testing the hypothesis, we synthesized a water-stable 3-dimensional cationic MOF built from a neutral tridentate ligand and bearing sulphate anions in the porous channels. The compound exhibits rapid and naked-eye capture of both dichromate (Cr2O72-) and pertechnetate (TcO4–) modelled permanganate (MnO4–) ions, which is a first of its kind report in the domain of MOFs (Fig. 1b, c). The exchange process has been characterized using several techniques and the compound has been found to have appreciably high loading capacities.

The uptake performance of the MOF for dichromate and permanganate has been evaluated even in concurrent presence of commonly interfering anions like nitrate (NO3–), perchlorate (ClO4–), tetrafluoroborate (BF4–) and triflate (CF3SO3–) and the ability has been found to retain. This validated the rational design approach of using tetrahedral anions having higher affinity to the framework as the suitable route for oxoanion capture. Another desirable feature of ion-exchangers is in its reusability and the present MOF was found to be a reversible adsorbent of dichromate anions.

In summary, we have reported a water-stable 3-dimensional cationic MOF which acts as a dual adsorbent of Cr(VI) and Tc(IV) oxoanions. The ion uptake for both the cases is rapid and selective in nature and can be observed in a visual colorimetric manner. We believe that the present approach described herein can contribute significantly in the development of MOF-based aqueous phase sorbents of toxic and reactive species.