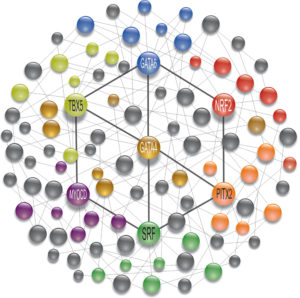 The pathophysiological mechanisms underlying HFrEF initiation and progression are well-characterized, from animal models to clinical trials. However, no clear pathophysiological mechanisms have been identified for HFpEF. It is not surprising, therefore, that the treatment of HFrEF is significantly advanced from year to year, whereas treatments for HFpEF still fail to reach a positive outcome.

Current research focuses on novel therapeutic targets in HFpEF. Heart disease is recognized as a consequence of dysregulation of cardiac gene regulatory networks involving transcription factors (TFs) and non-coding microRNAs. In this sense, the elucidation of regulatory mechanisms involved in diastolic (dys) function holds the promise of identifying novel approaches for the treatment of HFpEF. Regulatory mechanisms of diastolic dysfunction have not been deciphered to date. We frame and distil the rapidly evolving research focused on a role of core cardio-enriched TFs in the control of cardiac diastolic function in health and disease.

A variety of stresses on the adult heart activate a network of signal transduction cascades that converge on the core cardiac TFs (e.g., TBX-5, SRF, Myocardin,  GATA-4/6, PITX2, and NRF2) which interact in a combinatorial manner to elicit gene expression programmes that ultimately lead to cardiac dysfunction. A number of striking case-studies clearly illustrate how inappropriately high or low expression of these TFs can directly impact the cardiac diastolic function. In mouse models, deficiency in core cardiac TFs, such as TBX5, GATA-4/6 and NRF2, causes severe diastolic dysfunction with preserved LV systolic function. Other well studied examples demonstrate the elevated expression of SRF, Myocardin and PITX2 in both animal models and patients with HFpEF. Restoration of their altered expression to the range of physiological variation can potentially reduce or even eliminate disease, as demonstrated through silencing Myocardin overexpression in the porcine model of HFpEF(Torrado M., et al. 2011).

The accumulated evidence regarding the novel roles of cardiac TFs in HFpEF helps to delineate the molecular landscape of diastolic dysfunction, which can facilitate the development of molecular targeting strategies for HFpEF treatment. Direct targeting (through gene-based interventions) to either increase the expression of stress-downregulated TFs, such as TBX5, GATA-4/6 and NRF2, or suppress the expression of stress-upregulated TFs, such as Myocardin and PITX2, may represent therapeutic tools to ameliorate HFpEF progression. As gene delivery platforms, incorporating transcriptional regulatory elements and targeted delivery tools mature, they will provide an alternative strategy to traditional systemic administration for cardiac gene therapy.