Nickel (Ni) is a natural constituent of the Earth’s crust and, together with its compounds, it is used in many industrial and commercial applications. At very low doses, Ni carries out many physiological roles in biochemical processes from plants to human, but at high doses, it causes adverse effects on living organisms. Despite many studies on the mechanisms of Ni toxicity are available, the understanding about its toxic effects on marine organisms is still limited. Indeed, only recently, a growing number of studies focused on the effects of Ni on aquatic organisms and the consequently molecular stress responses activated. The sea urchin embryo is a well-established model for eco-toxicological studies in order to evaluate the toxicity of many pollutants, by monitoring morphological perturbations as well as the molecular defense systems adopted to cope with them. 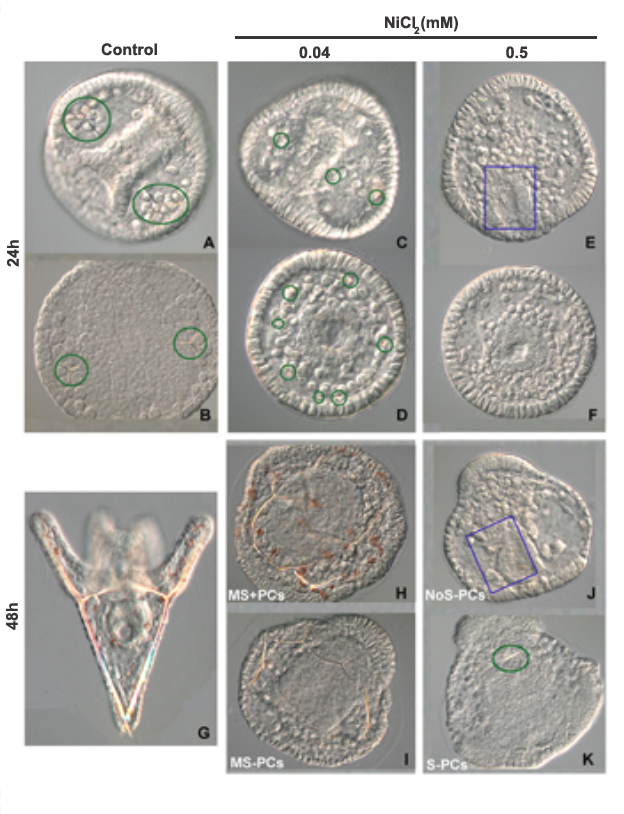 Fig. 1. Morphologies of Ni-treated P. lividus embryos at 24 and 48 hours of development.
Untreated embryos: A, B) control gastrula (24h) and G) pluteus (48h). Embryos treated with different concentrations of NiCl2: C-D and H-I) 0.04 mM at 24 and 48h, respectively; E-F and J-K) 0.5 mM at 24 and 48h, respectively. In Fig. 1A (lateral view) and Fig. 1B (crushed embryo), the green circles indicate the two spicules (rudimentary embryonic calcitic skeleton) formed by the skeletogenic cells in two symmetric ventrolateral clusters, laterally to the primitive gut. In Fig. 1C (lateral view) and 1D (crushed embryo), the green circles indicate the many radially distributed small spicules, i.e. from three (Fig. 1C) to seven (Fig. 1D). Embryos exposed to the dose of 0.5 mM had a short primitive gut (blue rectangle in Fig. 1E and 1J), no spicules were visible with the exception of a very small amount of Ni-embryos showed one spicule (Fig. 1K, in green). In Fig. 1H, MS + PCs indicates embryos with multiple spicules and some pigment cells. In Fig. 1I, MS-PCs, embryos with multiple spicules without pigment cells. In Fig. 1J, NoS-PCs, embryos without spicules and no pigment cells. In Fig. 1K, S-PCs, embryos with one spicule without pigment cells.

Since the 1950s, it is known that Ni might perturb the development of sea urchin embryos. Such Ni effect was investigated in more detail in the Lythechinus variegatus species. The main morphological effect was the radialization of the embryos, i.e. Ni embryos had many rudimentary embryonic skeletal elements (spicules) compared to normal embryos, showing only two spicules (untreated embryos at 24 hours of development in Fig. 1 A-B). The concentration of Ni necessary to cause a radialized morphology differs among sea urchin species, i.e. 0.04 M NiCl2 in Paracentrotus lividus (Fig. 1 C-D), or 0.5 M NiCl2 in L. variegatus. At the dose of 0.5 M Ni, P. lividus embryos had no spicules at 24h (Fig. 1 E-F) and 48h (Fig. 1 J-K). This is in agreement with studies showing that the sensitivity to Ni varies among sea urchins, although the reason is still unknown. In particular, P. lividus embryos are ten times more sensitive to Ni than L. variegatus and supernumerary spicules were observed by treating them with doses ranging from 0.03 to 0.08 mM. Another morphological effect of Ni was the reduced number/absence of the pigment cells (containing a red pigment) known to have an immune function in sea urchin embryos (Fig. 1 I-K). In agreement to this observation, we found a reduced expression of two specific markers of pigment cell, i.e. gcm (transcription factor) and PKS1 (enzyme involved in pigment synthesis). Among the genes analyzed by Real Time Quantitative PCR, p38MAPK, grp78, XPB/ERCC3 were upregulated at both 24h and 48h of Ni treatment at 0.5M, while NFkB was only upregulated at 48h (Fig. 2). 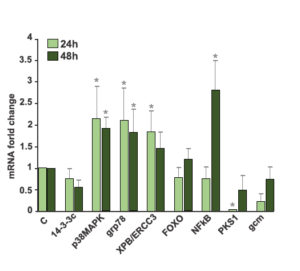 The p38MAPK protein is involved in the signaling of many types of stress, while Grp78 is a chaperon localized in the endoplasmic reticulum where it controls and helps the newly synthesized proteins. Elevated levels of p38MAPK and grp transcripts have been linked to protection of cells against adverse conditions, as the Ni treatment. The XPB/ERCC is required to repair DNA damage, thus its induction might be the consequence of a DNA damage caused by Ni exposure. The NFκB is a gene responsive to a broad range of harmful stimuli, here activated by Ni treatment.