Darwinian evolution is considered to be the way that life adapts in every possible environment in Earth. The great evolutionary biologist of the past century Theodosius Dobzansky used to say: “Nothing in Biology Makes Sense Except in the Light of Evolution”. Despite this, we must always have in mind that evolutionary procedures are linked with genetic change. Genetic change can be beneficial or can be harmful. Even in case that genetic mutations (changes in DNA) have been selected (a slow procedure, usually demanding thousands or millions of years – Figure 1) since they increase survival rate, maybe at the same time they dysregulate other functions of the organism. It sounds weird, but yes, a genetic mutation can be beneficial for some living aspects, but disadvantageous for some others. This is why there is the necessity of phenotypic plasticity. 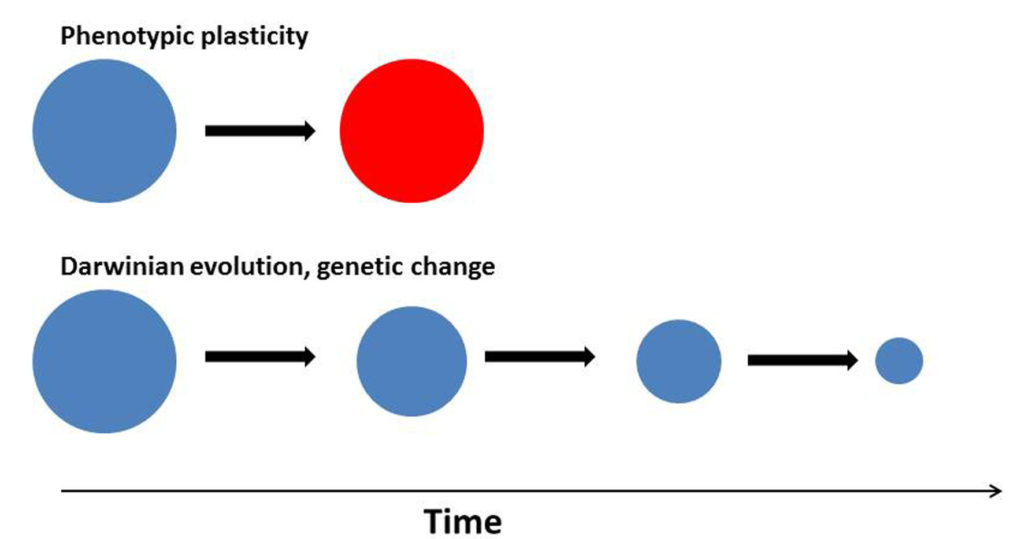 What is phenotypic plasticity? Phenotypic plasticity is the ability of an organism to change in response to changes in the environment, but without any changes in its DNA material (a quick procedure, happening at the same time or shortly after an environmental change – Figure 1). Many biologists believe that this phenomenon is very frequent in nature, since for mild environmental changes there is no need for dramatic genetic changes. Maybe the most well understood example is mimicry, the phenomenon that some animals change their colour under different environmental conditions in order to hide from their enemies or from their prey. On the other hand, phenotypic plasticity is probably an evolvable trait, since the ability for plastic phenotypes is inheritable.

It is unknown how an individual can change its phenotypical characteristics according to the current environmental conditions. I believe that this ability is largely based on microRNAs. MicroRNAs are small RNA molecules that exist inside our cells and greatly regulate the protein production. We are build up by proteins, so this regulation is important. Slight changes in microRNAs’ concentration inside our cells can determine the way we respond to cold, warm, starvation, radiation etc. This is why I believe that microRNAs maybe the most important factors that control phenotypic plasticity. Reduced plasticity potential maybe the cause for several diseases in humans. For example depression maybe the result of “plasticity inability”of our brain. Plasticity cannot help us adapt in every possible environment. Fortunately, humans use medicine in order to extend their phenotypic plasticity, e.g. through antidepressant drugs. “Plasticity inability” may explain many other aspects of life, like aging. Recent studies have shown that levels of excreted microRNAs are not the same between young and old individuals. Understanding better this phenomenon, it may help us intervene to aging related diseases, the main cause of morbidity in developed and developing countries.

We need to learn more about the role of microRNAs on cell function. The sure is that daily environmental changes are something that life has to deal with and microRNAs have possibly evolved as a solution to this problem.

‘Plasticity-First’ Evolution and the Role of miRNAs: A Comment on Levis and Pfennig.
Voskarides K
Trends Ecol Evol. 2016 Nov