Monitoring biosafety of pharmaceutical drugs, insecticides, and other bioactive molecules to mitochondria

Why study the biosafety of pharmaceutical drugs, insecticides, and other bioactive molecules to mitochondria?
Mitochondria are large cell organelles in plant and animal cells. They convert chemical energy from food in the cell to usable energy using oxygen. This process is called oxidative phosphorylation, which takes place inside the mitochondria. Reactions of Krebs cycle produce a chemical, NADH (Nicotinamide Adenine Dinucleotide, reduced form), which is then used by enzymes present in the inner mitochondrial membrane to generate energy rich adenosine triphosphate (ATP) molecules. These molecules are utilized by the cells whenever energy is required. Therefore, mitochondria are also referred as power houses of the cell. Mitochondria are abundantly present in muscle and brain cells, and sperms to supply ATPs during demand for energy. Monitoring biosafety of pharmaceutical drugs, insecticides, and other bioactive molecules to mitochondria is necessary because some of them interact with the mitochondrial membrane or membrane proteins, thereby affecting the energy levels of cells or even induces mitochondrial-dependent apoptosis (programmed cell death). 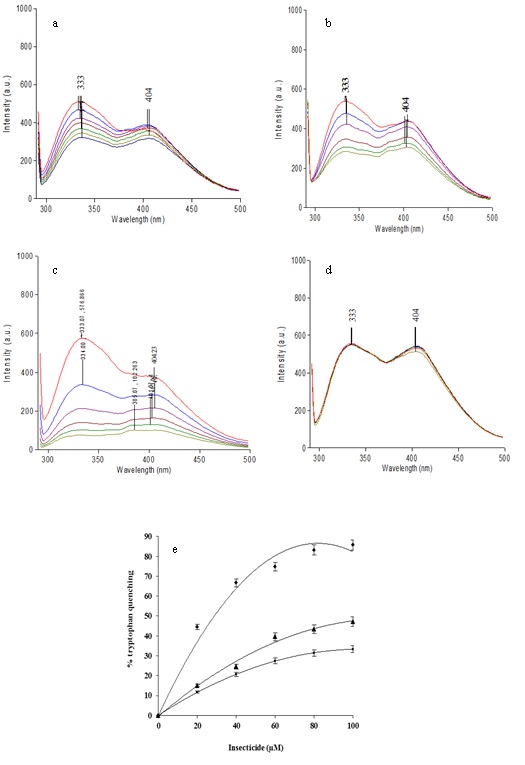 Fig. 1. Fluorescence emission spectra of mitochondrial membrane proteins in the absence of insecticide (red line) and in presence of increasing concentrations of insecticides (0-100 µM) (from red line onwards), methyl-parathion (a), carbofuran (b), endosulfan (c) and fenvalarate (d). (e) Binding of methyl-parathion (♦), carbofuran (▲) and endosulfan (■) with the membrane proteins of intact mitochondria isolated from H. armigera as assessed by tryptophan fluorescence quenching. The data represent mean ± SD (n = 3).

Tryptophan fluorescence quenching assay for measuring interaction of biologically active molecules with the mitochondria
Absorption of light promotes an electron to an excited state, resulting in light emission when the excited electron returns to the ground state undergoing a radiative transition, which can be measured by fluorescence spectroscopy. Fluorescence quenching refers to the process that decreases the fluorescence intensity of a sample. Proteins display fluorescence due to aromatic amino acids, mainly tryptophan, which can be measured by exciting at 295 nm. Changes in emission spectra due to tryptophan can be measured in response to protein conformational transitions, subunit association, ligand binding, or denaturation. It is this context that tryptophan fluorescence can be used as a valuable tool to measure the interaction of membrane proteins with the ligand molecules.

Outer membrane of mitochondria consists of 40% lipids, and 60 % proteins. The proteins includes a diverse array of enzymes, components of precursor proteins involved in translocation, pore forming proteins, and the proteins mediating mitochondrial fission and fusion. Certain membrane proteins are function as monomers, while others assemble into oligomeric structures spanning across the membrane. Due to complexity and dynamics of their arrangement, it is nearly impossible to study their interaction with any ligand in a lipid bilayer model. Fluorescence spectrum of the tryptophan residues positioned at the vicinity of the core of the protein can be used to measure local conformational change at the core of the protein.

Intact mitochondria when excited at 295 nm result in emission spectra with two shoulders at λmax 333 and 404 nm, with a valley at 370 nm (Fig. 1). Addition of insecticide to the isolated mitochondria results in quenching of fluorescence at both the shoulders. Quenching of Trp fluorescence emission due to biologically active molecules can be measured as reduction of fluorescence intensity at λmax 333 nm due to formation of an association between the protein molecules and the insecticides due to change in the Trp environment. Decrease in fluorescence intensity with a slight red shift at λmax 333 nm is due to the exposure of Trp residues to the polar environment.

Methyl-parathion (class: organophosphates), carbofuran (carbamates) and endosulfan (organochlorine) insecticides induce apoptosis through mitochondrial-dependent pathway, and hence, display substantial effects on Trp fluorescence quenching with the intact mitochondria, indicating the interaction of insecticides with the cell organelle. However, fenvalarate – a synthetic pyrethroid, which induces apoptosis through mitochondrial-independent pathway, does not result in any change in the fluorescence when added to the mitochondrial extract, and thus, has no interaction with the mitochondrial membrane proteins (Fig. 1).

Implications
The tryptophan fluorescence quenching assay can be used to assess the interaction of pharmaceutical drugs, insecticides, and other molecules with the mitochondrial membrane proteins. This assay is useful for understanding the mode of action, toxicity and biosafety of many chemicals to the target and nontarget organisms, especially pesticides, drugs, and other environmentally malign chemicals.