Licit and illicit drug use monitoring is an important subject for public health. Almost every substance that people consume is excreted as parent compound and as metabolites via urine and faeces and ends up in the sewage systems. Untreated wastewater can be collected and analyzed for the detection of substances that can be used as biomarkers for the estimation of drug consumption by the population. This approach is called wastewater-based epidemiology (WBE) and is widely used as a complementary epidemiological tool to established monitoring approaches such as self-reporting data and medical records. Wastewater monitoring uncovers valuable information for assessing human health status and lifestyle habits. 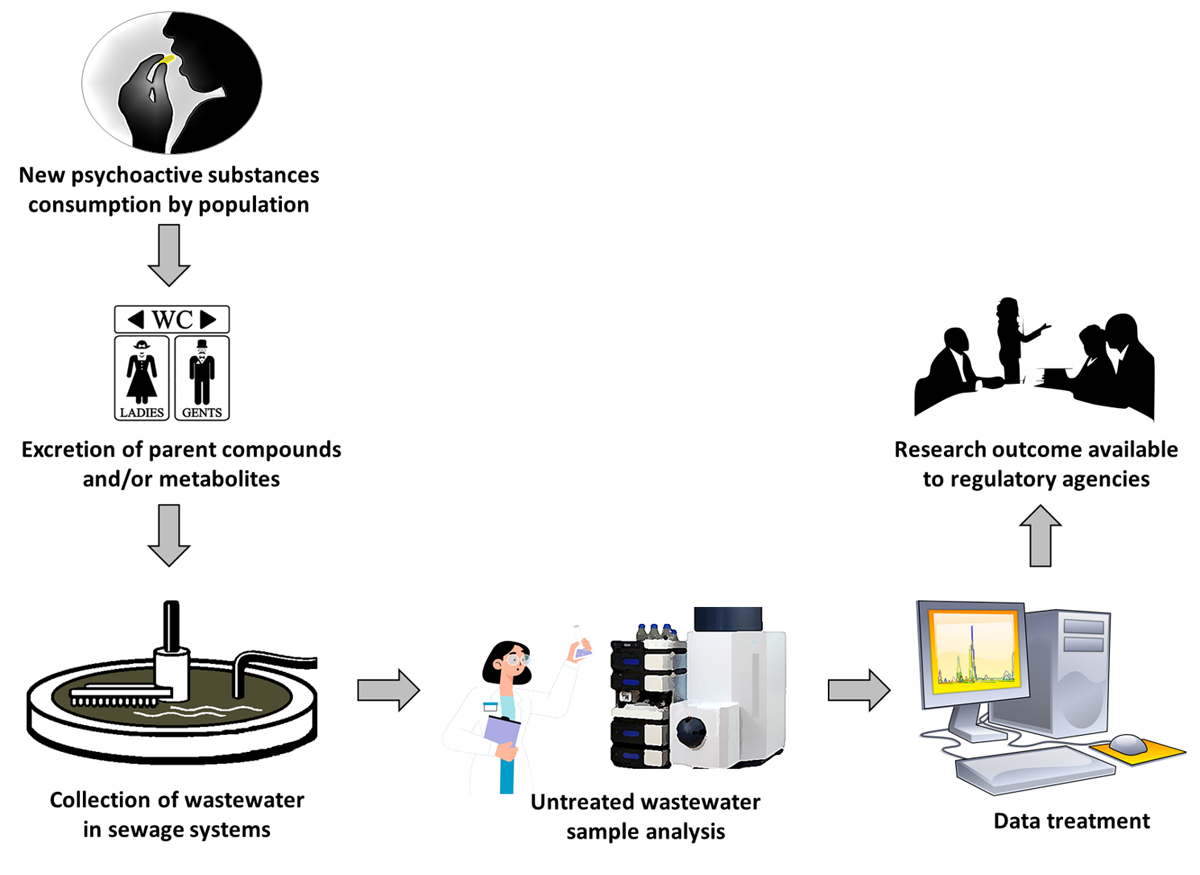 Today, lots of narcotic and psychotropic substances are controlled by international conventions. However, new unregulated substances are produced by slightly modifying the structure of known substances. These compounds termed as new psychoactive substances (NPS) may cause similar or new psychotropic effects. They emerged on the drug market in the recent years and have been reported in seizures, intoxication cases and deaths, while research on their exact effects and potential acute toxicity is limited. Consequently, providing WBE data for NPS to the regulators at national and international level is crucial, so that they design new drug control strategies.

In our study, the occurrence and the excreted mass loads of NPS in wastewater of Athens (Greece) were investigated through a four-year monitoring campaign (2015-2018). Thorough experimental procedures, powerful analytical instrumentation such as liquid chromatography high-resolution mass spectrometry (LC-HRMS) and sophisticated non-target screening workflows assisted by cheminformatic tools were used. Reports for NPS provided by the i) European Union’s Early Warning System, ii) European Monitoring Centre for Drugs and Drug Addiction (EMCDDA) and iii) online database HighResNPS were used for screening 729 NPS and other abuse-related compounds.

Despite the high potential of WBE, there are many challenges to be tackled, which were critically discussed in our study. One challenge was the low use of NPS, which resulted in low concentration levels in wastewater. The concentration levels are typically much lower than in the human biological fluids. Moreover, wastewater is regarded as a complex matrix, since it contains many interfering compounds. The lack of studies regarding pharmacokinetics, metabolism and excretion in human hamper the back-calculation of the mass loads in a sewage system to exact human consumption. Finally, the detection of NPS in wastewater cannot reveal their source and cannot be directly linked to drug abuse, because few NPS are also used for severe medical conditions. Nevertheless, sophisticated LC-HRMS screening workflows can benefit the research for NPS even in trace concentrations in complex matrices and can trigger studies regarding drug monitoring, drug profiling and metabolism and drug sources among others.

24 substances were detected in untreated wastewater of Athens during 2015-2018. Some of them have been detected in wastewater or river water across Europe, while four NPS were reported for the first time (AB-CHMINACA, DMT, MDAI, Methoxyphenamine). Few substances have also been reported in seizures and emergency cases in Greece by the Greek Documentation and Monitoring Centre for Drugs. Two additional substances were identified at a certain confidence level, proving the value of our analytical workflow to detect suspected compounds. The sporadic occurrence of NPS during the week and over the years and their low mass loads demonstrated their occasional and low consumption by the population compared to established illicit drugs. Results were made available to monitoring and regulatory agencies such as the Ministry of Health of Greece and EMCDDA for future decisions and mitigation measures.