Niemann-Pick type C1 (NPC1) disease is a lysosomal storage disease that affects nearly 1 in 100,000 live births worldwide. NPC1 disease is caused by mutations in the NPC1 gene that result in a dysfunctional NPC1 protein, which contributes to the efflux of cholesterol and other lipids from lysosomes to other organelles. In the absence of a fully functioning NPC1 protein, lysosomes gradually accumulate cholesterol, which impairs their function and the cells’ ability to use these lipids for their energy and structural needs. Ultimately, lysosomal lipid accumulation leads to cell dysfunction, inflammation and cell death. These pathological processes cumulate in severe neurological, lung, splenic and hepatic damage that greatly limits quality of life and lifespan of NPC1 disease patients. Currently, the range of therapeutical NPC1 disease tools is limited, making further research essential for these patients. 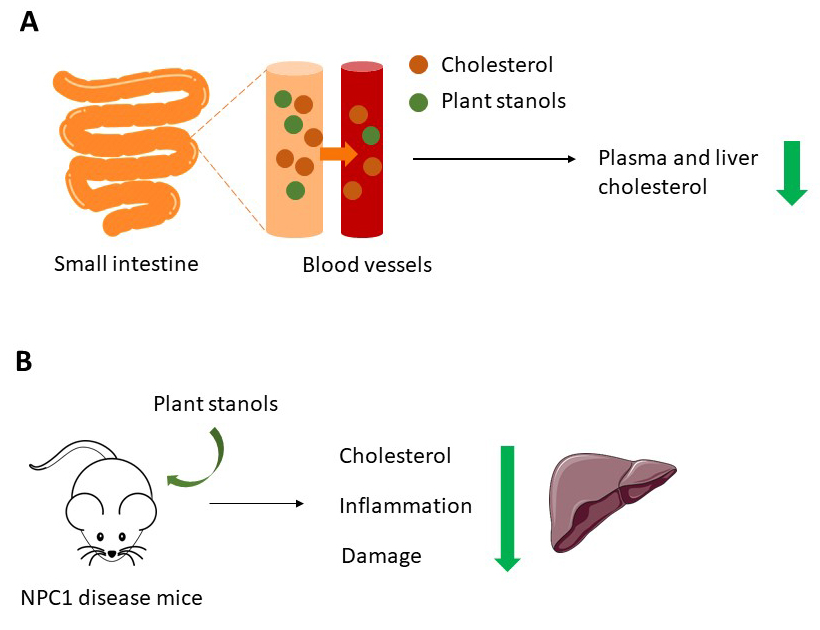 Plant stanols are compounds found in a variety of plants and nuts which are consumed at very low amounts in the average diet. Because of their structural similarity with cholesterol, plant stanols interfere with dietary cholesterol absorption in the intestines. As such, increased consumption of plant stanols, for instance via so-called “functional” margarines, reduces liver and blood cholesterol levels. In the past, our group showed that dietary plant stanol supplementation reduces liver cholesterol levels, inflammation and damage in mouse models of non-alcoholic steatohepatitis, a disease that, similarly to NPC1 disease, features lysosomal lipid accumulation as a key pathological trigger. Given the results of this study, we sought to investigate whether plant stanol supplementation can also improve peripheral symptoms in a mouse model of NPC1 disease.