Mortality attributable to influenza, evidence and considerations after the Covid-19 pandemic

In the last recent years, before the Covid-19 pandemic, influenza-attributable mortality has been impressive, in particular among elderly aged 65 years. A wide variability between different countries, seasons, and years was observed. In Italy, during the four winter seasons from 2013/14 to 2016/17 an average of 5,290,000 cases of ILI (Influenza like illness), that is of flu-like syndromes, were estimated, corresponding to about 9% of the Italian population. The highest estimated incidence was observed among children less than 5 years of age (23%) and adolescents (15%). The 2014/15 season, in addition to the excess mortality, also showed the highest estimated number of cases, for a total of 6,300,000 cases of flu-like syndromes. The winter seasons 2014/15 and 2016/17 showed an excess of all-cause mortality in different countries in Europe. In both seasons in Europe the predominant influenza virus strain circulating was A/H3N2 that most frequently associated with influenza mortality in elderly. 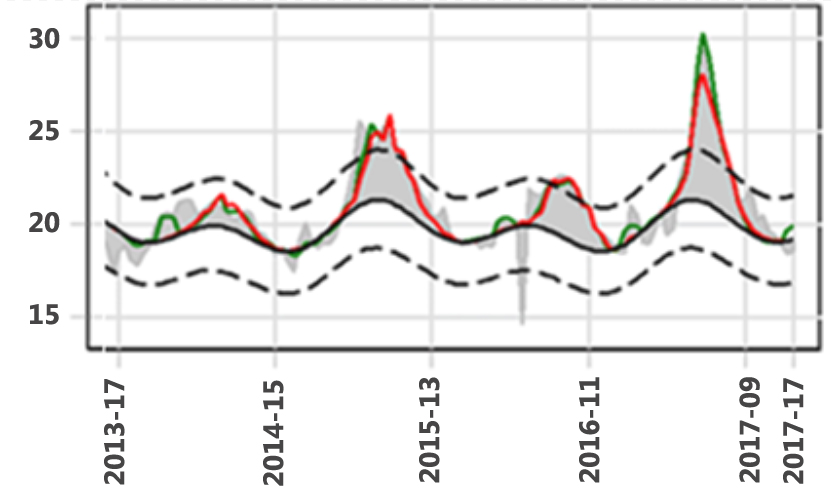 Previous studies on this topic, including Italian data, were included in multi countries study and based on sample data or limited to a single Italian region, always limited on short period investigated. A Poisson regression time-series model was adopted to estimate the influenza-attributable contribution to excess mortality during the influenza seasons from 2013/14 to 2016/17. The Influenza data were provided by the National sentinel influenza surveillance system (InfluNet) that was implemented in Italy in the 1999/2000 influenza season. Weekly number of deaths from all causes, by age group, was extracted from the National Register of Causes of Death provided by the National Institute of Statistics. In Italy, the mortality excesses attributable to flu epidemics during the winter seasons 2014/15 and 2016/17 were the highest in Europe: respectively 33.3  and 41. 2 per 100 000 (Fig. 1), corresponding in terms of absolute number deaths to an excess, compared to expected values,  of more than  20 000 deaths each season. Over 68,000 deaths were attributable to flu influenza epidemics in the four winter seasons investigated. Such an observed excess of deaths is not completely unexpected, given the high number of fragile very old subjects living in Italy.

In the last year the attention has been focused on the Covid-19 pandemic. Many scholars have tried to compare the mortality attributable to influenza with that due to Covid-19. E.g. Pastor-Barriuso et al. (2020) found an infection fatality rate for COVID-19 of 0.8% in Spain, and estimated it being about 10 times larger than that for influenza. However, infection fatality rates for virus infections depend on the infectious dose, which is higher in overcrowded settings. Death rates can be estimated only approximately, with reference to the observed cases. Comparisons can be tentatively made considering a fixed period in the same geographical context. In the winter season (from week 42 to week 17) 2020/21 in Italy 3,92 million cases and 83,334 deaths for Covid-19 were ascertained, corresponding with a case fatality rate of 2.1%, that is 4.7 times larger than that for influenza observed in the peak season 2016/17 (24,981 deaths among 5,44 million of cases).  In the winter season 2020/21 the influenza epidemic has been of low intensity, with only 2,4 million of cases estimated (ISS, Rapporto influnet, n. 23, 1st May 2021) (Fig. 2) 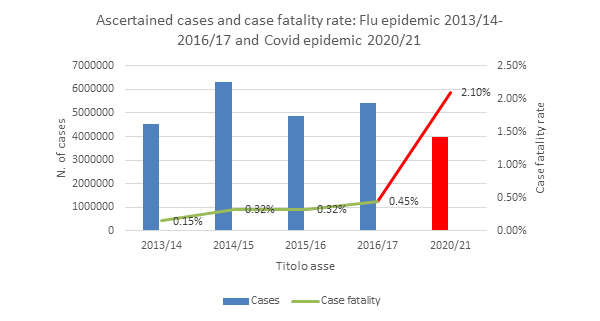 Beyond the emergency of the Covid-19 pandemic, the unpredictability of the influenza virus continues to present a major challenge to health professionals and policy makers. Nonetheless, the impact of flu epidemics in Italy will keep on constituting a serious public health issue, that can be tackled with new National vaccine strategies, e.g.  targeting children to obtain a herd effect in elderly and at-risk individuals.