When nuclear accidents like that at the Fukushima Dai-ichi Nuclear Power Plant release man-made radionuclides into coastal marine waters the resident biota are exposed by way of several environmental pathways. The commonly studied pathways for fishes are contamination via seawater and sediment and through ingestion of radionuclides in food. 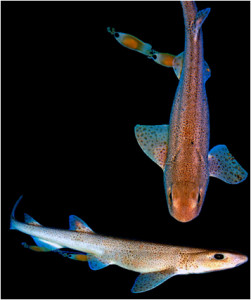 Fig. 1. Maternal dogfish in the process of laying a pair of eggs. (courtesy of Jean-Louis Teyssie, IAEA, Monaco)

One of the least understood pathways of exposure is whether mothers transfer their body burden of radionuclides to their progeny, which are typically more vulnerable to radiation impacts, as in humans.

We chose a small shark, the spotted dogfish (Scyliorhinus canicula), to explore the potential transfer of man-made radionuclides to its young (Fig. 1). This species produces a small number of large, heavily-yolked eggs (Fig. 2) which have long periods of embryonic development – all hallmarks of a lifeform more vulnerable to potential contaminant impacts on its population numbers.

Mothers were fed radio-labelled flesh of mussels, one of their staples in nature, at the Marine Radioecology Laboratory of the International Atomic Energy Agency (IAEA), Monaco, and the eggs were harvested to see whether four radionuclides, typically associated with effluents from nuclear facilities, were actually transferred to them. The radionuclides studied were quite varied, some being radioactive forms or mimics of biologically essential elements needed in abundance by dogfish, i.e. Zinc-65 and Cesium-134. Cobalt-60 was also studied as stable cobalt is a trace element needed in very small amounts because it is a critical constituent of Vitamin B12. Americium-241 is biologically non-essential and a product of the radioactive decay of Plutonium.

Our experiment which extended over 60 days unequivocally established the transfer of all four radionuclides from mother to eggs and at different rates which reflected the requirements of the dogfish pup during its development, within the protective egg capsule, of more than 100 days.

Fig. 2. Details of the developing embryonic dogfish within it protective case, attached to its source of sustenance, the yolk sac.
(courtesy of Jean-Louis Teyssie, IAEA, Monaco)

Another important finding of this original study was that those radionuclides which represented trace elements in more biological demand, zinc-65 and cesium-134, were predominantly transferred by the mother to the yolk, making them readily available for metabolism by the developing embryo and the subsequent incorporation into the tissues of the dogfish pup, thus potentially extending the radiation exposure of its tissues even after it has hatched as a free-swimming juvenile.

As one of the first experimental investigations in marine biota of the maternal transfer of radio-contaminants to progeny this study has confirmed a pathway of exposure to radionuclides at perhaps the most sensitive stage of the life cycle of this shark to radiation effects.

In a wider sense, our results are further supporting international efforts of the International Commission for Radiological Protection (ICRP) to achieve more comprehensive protection of the marine environment and its biodiversity from the potentially adverse effects of radio-contaminants.