The ability of an organism to quickly alter or fine-tune its gene expression profile as a response to unfavorable and stressful conditions is a vital trait that can determine its chances of growth and survival in unstable environments. Although regulation of chromosomal DNA transcriptional activity is an effective means of controlling gene expression levels, it is also a time- and energy-consuming process that usually lacks fine detail and fails to provide adequately quick and delicate responses to external cues. As a result, eukaryotes often rely on mechanisms of post-transcriptional control in order to couple gene expression with environmental conditions. These mechanisms can produce both small- and large-scale alterations in the protein content of cells, acting very fast and with great specificity to affect the stability/decay of available mRNA molecules and the extent to which they get translated into proteins. 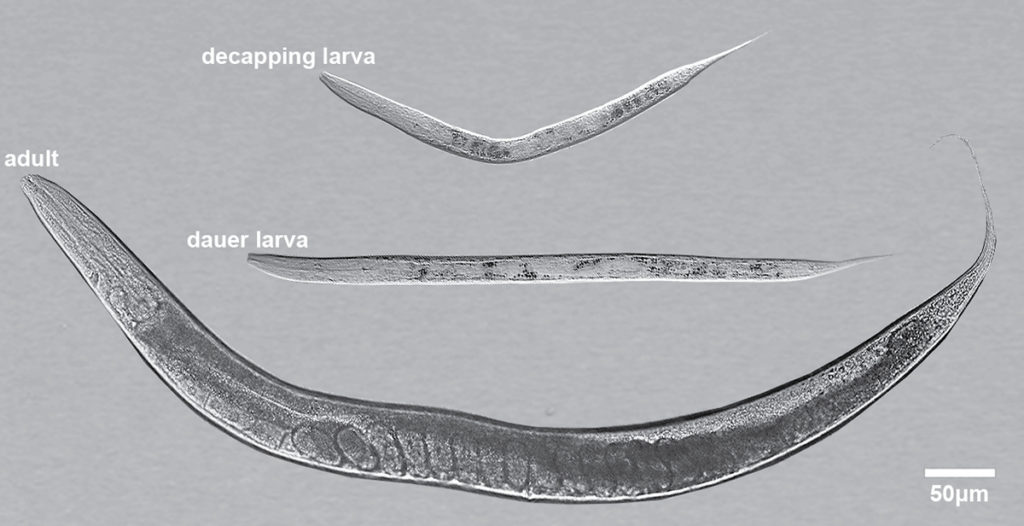 Fig. 1. Morphology of worms that have lost the ability to remove the protective cap structure from the 5’-end of mRNAs (decapping larvae), compared to mature adults and stress-resilient dauer larvae, when grown at high temperatures.

Using the nematode worm Caenorhabditis elegans we have shown that the integrity of the mRNA decay machinery is essential for the animals in order to properly adapt and complete their development under extremely high ambient temperature. C. elegans can develop normally in a temperature range of 12-25°C, while at higher temperatures growing larvae have the ability to enter an alternative developmental pathway and arrest as dauers. Dauer larvae are very resilient to stress and can resume normal development when conditions improve. In our study we used mutant animals that have lost the ability to remove the cap structure at the 5’-end of mRNA molecules, which protects them from degradation, rendering the main mRNA decay pathway ineffective. At favorable temperatures these decapping mutants are viable and grow to maturity, albeit slower than wild type. However, when exposed to 27.5°C, they are unable to complete their development, which is irreversibly arrested at a larval state that resembles the dauer (Fig. 1) but does not show the physiological traits of dauer larvae, nor does it provide any survival advantage, since animals die within a couple of days. Our analysis has shown that this failure to properly adapt to the stressful environment is traced to the inability of the regulatory miRNA lin-4 to induce the decay of its target mRNA lin-14 that is stabilized at aberrantly high levels in decapping mutants. This stabilization is also observed at normal temperatures and could additionally account for their slow development. These RNA molecules have a central role in the heterochronic pathway, which includes many miRNA/mRNA interactions responsible for the coordination of developmental timing events in C. elegans. Many components of this heterochronic genetic network are actually evolutionarily conserved and participate in the progression of crucial developmental decisions in other animal systems. This means that by controlling the effectiveness of such interactions, decapping-mediated mRNA decay can have a broad role in the temporal regulation of developmental processes, as well as of mRNA function in general.

Further analysis has shown that restoring decapping activity only in the worm’s nervous system can prevent the developmental arrest of decapping mutants at high temperature and improve their growth rate to normal levels at favorable temperatures. This observation strongly suggests that control of gene expression by both regulatory miRNAs and the mRNA decay machinery is used by neuronal cells in order to adjust the secretion of hormones, or other signals, and integrate environmental cues to orchestrate developmental events in distal tissues. Overall our work unveils the indispensable role of mRNA degradation in post-transcriptional control of spatio-temporal gene expression, which can provide robustness in the adaptation to external factors, opening new perspectives on the mechanisms used by eukaryotic organisms in order to grow and to survive in everchanging and often hostile environments.