Cellular mechanics are of prime importance in the birth and the evolution of tumors towards increasingly aggressive stages and are often proposed as potential biomarkers to evaluate metastatic potential. Mechanical properties of two human prostate cell lines, one highly aggressive metastatic (PC-3 cell line), and one non-tumor control (WPMY-1 cell line), were analyzed at three levels of molecular complexity: cell aggregates, single cell, and at the molecular level to study membrane lipid dynamics. 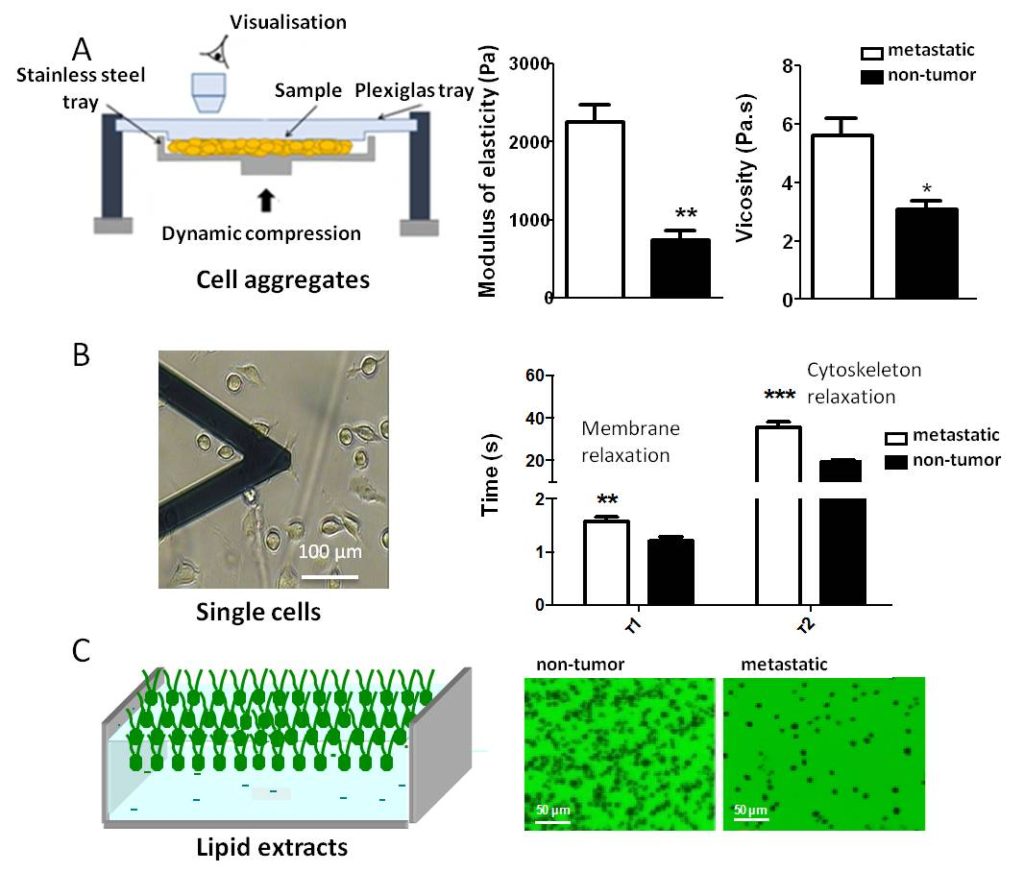 Fig. 1. Mechanical properties of metastatic and non-tumor prostate cell lines: A. Cell aggregate behavior under dynamic compression – left, scheme of the biotribometer used in this experiment; right, modulus of elasticity and viscosity determined after mathematical treatment of the signal recorded; B. Single cell behaviour during indentation experiment –left , AFM tip compressing one cell at the time; right, relaxation time after compression; C. Langmuir monolayers obtained from lipid extracts –left, a lipid monolayer spread at the surface of a Langmuir trough; right, fluorescence images of lipid monolayers obtained from non-tumor and metastatic cells.

At the cell aggregate scale, mechanical measurements (Fig. 1A left) revealed a lower elastic modulus for highly invasive metastatic cells, that is, a reduced stiffness compared to control. In parallel, the analysis of viscosity shows that metastatic cells are less viscous compared to healthy cells (Fig. 1A right). Considering that the viscosity of a fluid is the measure of its resistance to gradual deformation, we can conclude that the metastatic aggregates resist less to deformation than non-tumor aggregates. This result is rather intriguing when related to clinical observations of tumors which are often reported as a solid mass. The experimental setting used in our work reveals the intrinsic viscoelastic behavior of cell associations inside the aggregates, in the presence of inter-cellular junctions, but in the absence of elements of the extracellular matrix. The contribution of elements of the extracellular matrix is probably essential to the more rigid behavior of the tumor tissue in situ, as reported by clinical observations. Cell-to-cell associations appear to be less cohesive in the metastatic cell aggregates. These viscoelastic characteristics can be related to the metastatic cell line capacity to invade or migrate, corroborating the literature data indicating that most cancer epithelia lose E-cadherin-mediated cell–to-cell adhesion during cancer progression towards malignancy, as a prerequisite for tumor cell invasion and metastasis formation.

At a single cell scale (Fig. 1B), cell viscoelasticity measurements performed by indentation using an Atomic Force Microscopy (AFM) tip (Fig. 1B left) confirmed results obtained with cell aggregates. Metastatic cells have a lower elastic modulus; hence they have a reduced stiffness and are more prone to deformation than the control. Interestingly, our results reveal a differential response coming from two different cell elements, successively stressed: the membrane, with a short relaxation process, and the cytoskeleton network with a longer relaxation process (Fig. 1B right). Both responses are faster for metastatic cells and may be related to the changes in composition and mechanical properties of both cytoskeleton and plasma membranes that accompany the evolution of cancer to more aggressive stages. To confirm lipid role in the metastatic process, we performed fluorescence measurements on lipid extracts coming from the two cell lines described above. This analysis was performed using Langmuir monolayers constituted of lipids extracted from both cell lines and spread on an aqueous surface (Fig. 1C left). Fluorescence microscopy images of the monolayers showed a higher proportion of dark (rigid) domains (Fig. 1C, right). A lower mobility of lipids in monolayers was also measured for extracts obtained from control cells, which can explain the slower relaxation process after cell compression observed by AFM. A correlation between the modification of the plasma membrane lipid composition and the malignancy of cells is then possible as cell functions, such as motility and basement membrane invasion may be severely affected. We show that the mechanical properties, related to cell viscoelasticity, are strikingly different between tumor and non –tumor cell lines, whatever the scale: cell aggregates, single cell or lipid extracts and can potentially be considered as biomarkers which can help to evaluate the metastatic potential of prostate cells.