Multiminerals in mammals: longevity, organ biology and other things

Whenever we pick up a bottle of multimineral supplement, some chemical elements often appear on the list of ingredients: sodium, potassium, calcium, magnesium, zinc, iron, and so on. How are they important to us? Well, our bones are made up of calcium phosphate; our bodily fluids contain sodium and potassium ions; and about 1/3 of all enzymes (biological catalysts that speed up chemical reactions in our body) require trace elements like zinc, iron, and copper. Deficiency in these elements often leads to health problems such as anemia and poor bone development. 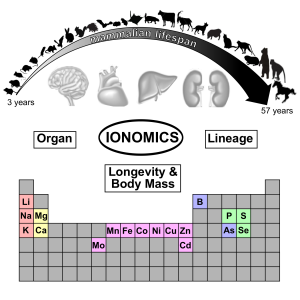 Many other animals also need these elements, but the difference in usage and distribution is not well understood. In this study, we examined 26 species (including mouse, rat, shrew, bat, rabbit, cat, dog, pig, horse, macaque, and bear) that were chosen to represent the major groups of mammals and over a wide range of body sizes and lifespans. For each species, we measured the levels of 18 chemical elements in brain, heart, kidney, and liver, and tried to answer a number of questions: Do some of hese elements have similar distribution patterns? Are their levels high in one organ but low in another? How do their levels differ across different species? Do their levels correspond to the body mass or lifespan of the species?

In terms of the distribution pattern, iron, manganese, molybdenum, cobalt, and nickel showed strong correlation (i.e. they were often found at high levels together or at low levels together), suggesting they might have some common properties. In fact, all five elements can lose electrons to form ions, and these ions can enter the cell using the same protein channel. Copper and zinc are also closely related. Many metabolic enzymes need either copper or zinc for proper functioning, and some even require both elements. In terms of the organs, liver had high levels of many elements, since it is the center for many metabolic reactions and detoxification processes. In contrast, brain and heart had low levels of most elements.

When we compared the 26 species, there were some interesting observations about the element selenium. First, selenium was found at very low levels in the kidney and liver of the two species of African mole rats. They included naked mole rats, which are found in African deserts. They are of similar in size to mice, but can live almost 10 times as long. Second, the selenium levels in the kidney and liver in different species depend partly on the number of selenocysteine (an amino acid containing selenium) residues in a protein called Selenoprotein P, with higher number of the residues corresponding to higher selenium level. Third, when the species were ranked by how long they could live, the longer-lived ones had less selenium in liver than the shorter-lived ones. Selenium is essential to all animals, but the biological reason behind its variation across species is still unclear. As the sequences of Selenoprotein P are determined by the natural genetic coding of the species, such variations probably arise during the millions of years of evolution to tailor to the survival strategies of the species.

Additionally, the levels of zinc and cadmium in the kidney and liver also showed positive correlation to species longevity. The effect of zinc is likely linked to differences in body mass, whereas cadmium is a heavy metal in the environment and may simply accumulate as the animals live on. While there are still many outstanding questions, our study illustrates the pattern of element utilization and distribution among different organs and species, and the potential links to variations in body mass and lifespan.