Multiple sclerosis (MS) is a chronic, demyelinating and degenerative disease of central nervous system (CNS), characterized by an autoimmune inflammation. Approximately 2.5 million people in the world are affected from multiple sclerosis which is one of the most prevalent neurodegenerative diseases. The exact etiology of the disease is still uncertain, partly due to lack of sensitivity in current techniques. The disease has considerable clinical heterogeneity, but most of the patients initially experience a single demyelinating event, called clinically isolated syndrome (CIS). The clinical course of multiple sclerosis may follow different progression patterns, and one of them is relapsing-remitting MS (RRMS) that affects 85% of MS patients. Patients experiencing CIS are under high risk of developing RRMS. It has been shown that 38-45% of untreated CIS patients convert to clinically definite multiple sclerosis within 2 years. Therefore, early diagnosis of CIS patients transformed to MS is essential for early treatment. 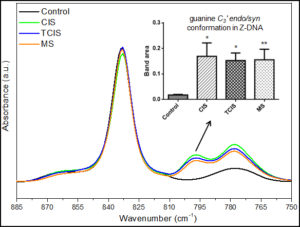 Fig. 1. IR absorbance spectra of CSF samples from control, CIS, TCIS and RRMS patients in the 885-750 cm–1 spectral range normalized with respect to the amide I band located at 1657 cm–1 and changes in the band area of the band related to Z conformation DNA (795 cm–1) in subpanel (The degree of significance for the comparison of the diseased groups with respect to the control group was denoted as * p < 0.05, ** p < 0.01).

There are no diagnostic tests specific for multiple sclerosis. Its diagnosis is based upon clinical assessment. Magnetic resonance imaging (MRI) is utilized to find evidence of damage in CNS. Cerebrospinal fluid (CSF) analysis may directly reflect the biochemical changes related to neurodegenerative diseases, including multiple sclerosis, because of its close anatomical contact with brain interstitial fluid. Several CNS diseases may show numerous discrete lesions similar to those of MS which makes its diagnosis difficult. Hence, it is eminent to discover new methods that better discriminate MS from other CNS diseases.

The alterations in biological molecules induced by pathological conditions are directly reflected in their vibrational spectra and can be determined rapidly and sensitively by infrared (IR) spectroscopy. Consequently, IR spectroscopy is a promising tool for the development of clinically useful biomarker which reflects the onset and progression of a disease. Furthermore, multivariate analysis methods such as Hierarchical Cluster Analysis (HCA) and Principal Component Analysis (PCA) have been successfully used in screening and diagnosis, providing highly sensitive and specific discrimination of diseases based on spectral differences.

Current study aims to reveal the potency of IR spectroscopy coupled with multivariate analysis methods in the detection of RRMS, CIS and CIS to RRMS converted patients via CSF samples. The obtained information will give new insights into disease progression and thus, point out potential targets for treatment.

Three group CSF samples as Control (n= 24), CIS (n=30), RRMS (n=35) were studied. Control individuals having orthopedic problems were not diagnosed with any neurological disease. The patients were followed up for 24 months. After follow-up period, 15 CIS patients developed RRMS which was denoted as transformed CIS (TCIS). 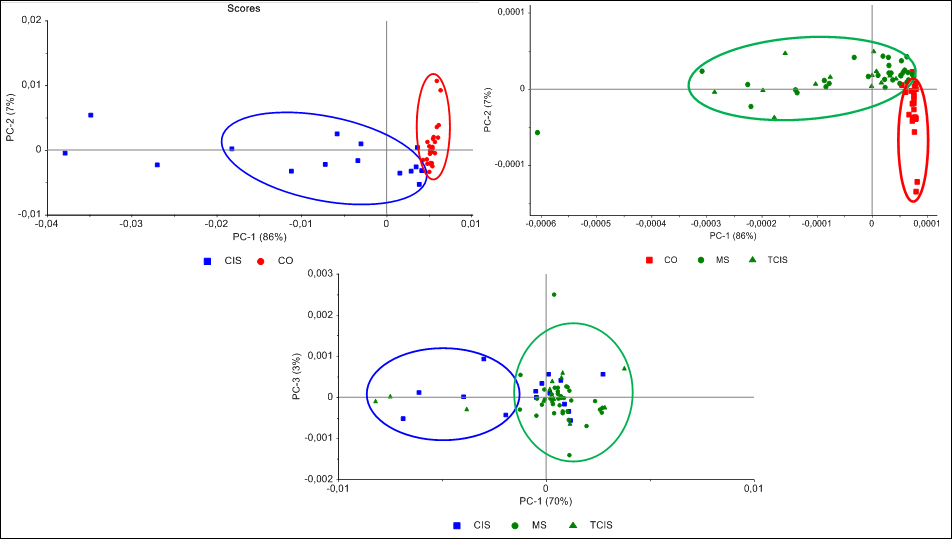 The results of the current study demonstrated that biomolecular composition and structure of CSF samples for diseased groups differs from control samples. The obtained changes such as disease-induced peroxidation of membrane lipids, protein oxidative damage and increased nucleic acids content have diagnostic significance and enable the discrimination of diseased CSF samples from each other. One of these changes is the observation of a new band located at 795 cm−1 concerning Z-DNA conformation in diseased groups unlike controls (Fig. 1). Hence, this band can be used as a biological marker for diagnosis of RRMS and CIS from controls. A successful differentiation was obtained between control and diseased groups with 95% sensitivity and a successful separation of TCIS and RRMS groups from CIS group with 88% sensitivity was obtained (Fig. 2). Moreover, 10 of 15 TCIS samples were accurately identified. Other 9 CIS samples were consistently clustered in multiple sclerosis group which may indicate that these CIS patients may also transform to MS over time.

This study proposes that the disease-induced changes long before they become visible to the neurologist might be achieved from computational analysis of IR spectra.