Alzheimer’s disease (AD) is the most common cause of dementia, leading to an enormous burden on societies worldwide. In brains of patients with AD, abnormal tangles of a protein called tau are found within nerve cells, in addition to the accumulation of the beta-amyloid protein between brain cells in so-called amyloid plaques. Although not yet fully understood, these changes are hypothesized to lead to the disease. Most patients only develop symptoms at old age, but in some, they can arise even before 65 years of age (‘early-onset AD’). Patients with this early-onset form of AD have a particularly strong genetic component, and often have a familial history of AD. Mutations in some genes involved in the processing of the amyloid protein are already known to cause a rare aggressive form of the disease, and can be inherited from generation to generation. The discovery of these mutations has been an essential step in our current understanding of the disease. In order to further elucidate how genes are involved in the development of AD, both for rare early-onset and common late-onset disease, detailed investigation of the genetic code of patients with AD is pivotal.

We investigated the genetic code of a gene known as the sortilin-related receptor 1 (SORL1), which produces a protein that is involved in preventing the formation of amyloid plaques in the brain, thereby serving as a protective factor for the development of AD. Changes in the genetic code of SORL1 have already been implicated in AD, and can result in altered gene products of RNA and protein, which could affect their ability to prevent the formation of amyloid plaques. To confirm if rare genetic mutations in SORL1 play a role in early-onset AD, we investigated the genetic code of the SORL1 gene in 1255 early-onset AD patients from across Europe (i.e. Belgium, Spain, Italy, Portugal, Germany, Sweden and the Czech Republic), and compared those with the SORL1 code of 1938 healthy control individuals originating from those same regions. 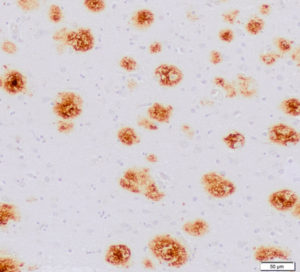 Fig. 2. Amyloid plaques in the brain of an early-onset Alzheimer’s patient carrying a mutation in the SORL1 gene

In total, we identified 92 rare genetic variants in patients and control individuals. Rare genetic variants in SORL1 were more common in the patients (8.8% carried a rare SORL1 variant) than in control individuals (5.6%). Remarkably, we observed a specific type of genetic variants, known as protein truncating variants, exclusively in patients. These protein truncating variants are predicted to lead to either a heavily altered gene product, or to loss of protein, thus abolishing the protective effect of the SORL1 protein.

Most carriers of these mutations had – except for their early onset – a typical course of disease, with memory problems dominating their symptomatology. However, patients with a SORL1 mutation were more likely to have a familial history of Alzheimer’s disease, further implicating a role of SORL1 in the heritability of AD.

In conclusion, while most rare genetic variants in the SORL1 gene are either neutral or mildly risk-increasing, variants predicted to lead to loss of functional protein are likely to be stronger risk factors that may contribute to familial occurrence of AD. This implicates that SORL1 plays an important role in the development of Alzheimer’s disease, and could possibly be a target for novel therapies. Further research is needed to see if carrying these mutations can predict the future development of the disease, and if genetic tests of SORL1 can be used in clinical practice.