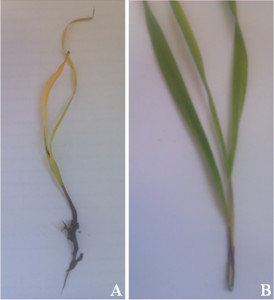 Fig. 1. A. Symptoms caused by Fusarium culmorum on a barley seedling after 12 days. B. Control without infection.

Plants are regularly victims of infections by pathogens, particularly by fungi. Crops as barley could be infected by phytopathogenic Fusarium species (Fig. 1) what triggers a lot of damages and money cost. The Fusarium fungi have the particularity to synthesize various mycotoxins in planta to succeed their infection. In our research, we aimed to understand the physiological impact on the plant cell triggered by an important mycotoxin: deoxynivalenol (DON). We choose to work on a very useful lineage of plant cell, the Nicotiana tabacum Bright Yellow 2 (BY2). This cell culture is undifferentiated and “immortal” because the culture survives for a long time just thanks to a regular sub-cultured.

The programmed cell death in plants (PCD), also refers as “cell suicide”, implies finely controlled process. Thus, we checked the implication of genes and proteins necessary for such process. By inhibiting the gene transcription or the protein synthesis which allow eliminating proteins putatively involved in the PCD process we effectively reduced the DON induced PCD. The PCD process can be visualized by morphological modifications notably a cell shrinkage due to a water efflux in response to DON (Fig 2). The shrinkage of the cells involved water and ions release through the cell membrane by specific pores named ion and water channels. In our experiments, using inhibitors of ion channels we can reduce the cell shrinkage and the cell death highlighting the role of these channels in the PCD process.

Fig. 2. Isolated BY2 protoplasts in presence or not of the mycotoxin DON. They are colored with a red vital dye that colour the inside cell when it is alive. We observed that DON triggered shrinkage of the protoplast and a decolouration. These two observations reveals first, the death of the cell and secondly, a loss of water representative of the Programmed Cell Death. The cell control stays red and round.

Moreover we showed that DON could induce different cross-linked pathways involving reactive oxygen species (ROS) generation linked to a mitochondrial dysfunction. Effectively DON induced ROS a transient accumulation after 1h followed by a large peak at 3h. The scavengers of ROS reduce the cell death induced by DON. Concerning mitochondria (a subcellular compartment of the cell involved in energy production) we could observe a DON dependent swelling due to an influx of water inside through the opening of mitochondrial pores. Here again we can block the PCD by blocking the mitochondrial pores.

The description of such mechanistic in plant cells in response to a pathogenic stress is important to understand the process of intracellular defence of the plant. This can permit to improve the defence system of the plant through stimulations of the balance between death and survival to avoid a massive cell death.