A moderate subchronic lead intoxication was observed in outbred male rats after repeated intraperitoneal injections of lead acetate during 5 weeks. Half of so exposed and control rats where given a calcium preparation with fodder. The next day after the last injection the heart of each animal was excised, then the trabecules, papillary muscles and tissue (for myosin extraction) from the right ventricle were used for in vitro investigations. Many of the indices describing the condition of the rat’s organism toward the end of the subchronic exposure to lead were different from the corresponding control values. Some of them are regarded to be lead-specific effects. 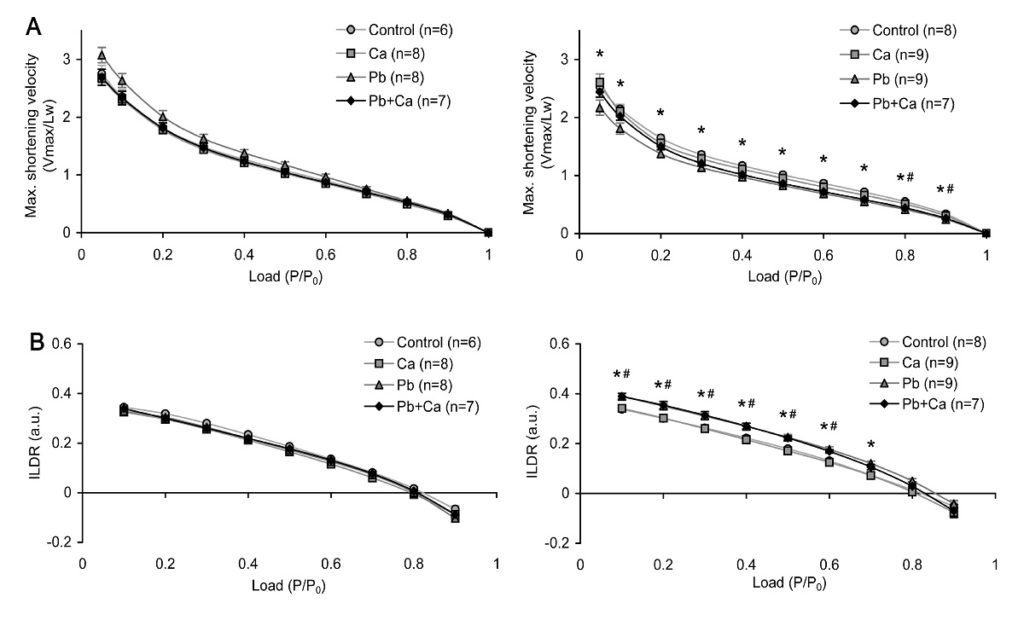 Using isolated preparations of trabecules and papillary muscles we have shown that changes in lead-treated rats in most of the basic characteristics of isometric and afterload contraction-relaxation cycles are more pronounced for papillary muscles compared with trabecules. Maximal rates of isotonic shortening for all afterloads in the papillary muscle are lower in the lead-exposed group (Fig.1A), and maximal velocity of papillary muscle shortening was 2.69±0.19 (units Vmax/Lw) comparing with 3.05±0.15 for control group and 3.03±0.13 for Pb+Ca group. This decrease is consistent with data obtained in an in vitro motility assay, where the maximum velocity of unloaded movement of regulated filaments along myosin was considerably lower for the lead-treated rats (1.5±0.2 µm/s) comparing with the control ones (2.0±0.25 µm/s).

Under subchronic lead intoxication, a reduction in the velocity of both the thin filament and the velocities of isotonic shortening correlates with a shift in the expression of isomyosins towards slower V3 isomyosin as revealed by gel electrophoresis. Thus, in this group β-chains constituted 45±8% and control value was 15±4%. This shift is an energy-saving mechanism contributing to the adaptation of the cardiac muscle to deterioration of its functioning. The persistence of the peak force of isometric contractions in the lead-exposed group compared with the control one can be explained by the fact that V1 and V3 rat isomyosins develop an equal isometric force. Therefore, no changes in the efficiency of the contractile apparatus estimated by the work produced by muscles over the entire range of afterloads were discovered in both kinds of cardiac muscle preparations. At the same time, an increase in the index of load dependence relaxation in the papillary muscle preparations of lead-treated rats in the wide range of afterloads (Fig. 1B), points to a reduced ability of these muscles to adapt to dynamic conditions of mechanical loading.

Noteworthy is that the myocardial trabecules and papillary muscles of lead-treated rats are characterized by lower rates of both isometric tension development and of relaxation compared with the preparations form the other groups of rats over the entire range of length as shown in Figure 2A drop in the passive (diastolic) mechanical tension in trabecules takes place, which can be explained by their possible hypertrophy since myocardial hypertrophy seems to enhance stiffness. 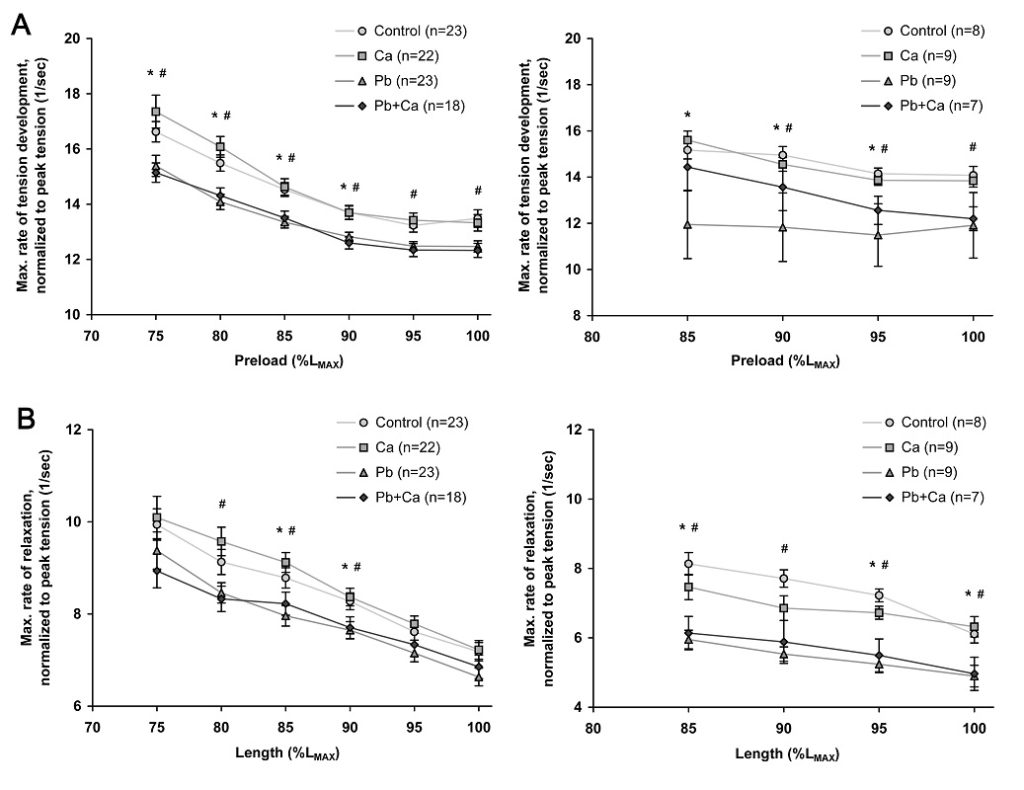 All these effects suggest impaired contractility of the cardiac muscle due to the subchronic lead intoxication. In the same time, a calcium-containing supplement has been shown to produce a moderate protective effect on both organism-level lead intoxication and related changes in rat myocardium.