Nailfold microangiopathy in dermatomyositis and systemic sclerosis: what is different in long term follow-up?

Peripheral microangiopathy is typical of SSc, as well as frequently observed in  DM, and it can be easily recognized by nailfold videocapillaroscopy (NVC), a non invasive and safe technique. The characteristic NVC pattern named “scleroderma-pattern” that has been typically described in SSc, has also been reported in other “scleroderma spectrum disorders”, including DM. Only few studies described the main NVC changes over time in this last clinical condition. 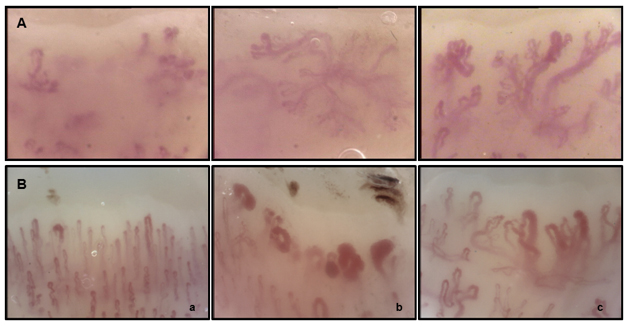 The aim of our retrospective study was to describe the main NVC changes in patients with DM,during a three year follow-up, and to investigate possible differences in NVC findings at first visit (first capillaroscopy) in comparison with patients affected by SSc matched for sex, age and disease duration.

In this study nineteen out of 24 DM patients (79%) showed a NVC “scleroderma-like pattern” at baseline.

No statistically significant variations of all the capillaroscopic scores was observed during the 3 year follow-up in DM patients (Fig. 1A), differently from SSc which microangiopathy is notoriously progressive (from the “Early” to the “Active” and finally to the “Late” pattern) (Fig. 1B).

By comparing DM patients with or without anti-Jo-1 antibody positivity, no statistically significant differences of the scores of the main capillary parameters was observed at baseline between the two groups. In our study, a relevant angiogenesis is a distinctive NVC feature in patients with DM: the comparison between DM and SSc patients at baseline demonstrated a particularly higher prevalence of giant capillaries and microhaemorrhages in the latter disease, as well as higher frequency of ramified capillaries (angiogenesis) and loss of capillaries in the former.

In conclusion, both SSc and DM may display similar nailfold microvascular abnormalities that can be detected by NVC. However, DM an SSc display quite different nailfold capillary features: this open the door toward a possible identification of a DM capillaroscopic pattern (different from the well known scleroderma pattern of SSc), which may be of great relevance for the early diagnosis of connective tissue diseases.