In many animal populations, bigger individuals often seem to mate more successfully and have a better chance of survival than smaller individuals. On a far larger scale, fossil evidence from some groups of animals suggest that species which go extinct are on average smaller than those that continue and thrive – over millions of years then, is bigger better? The phenomenon of evolutionary lineages (groups of animals and their descendants) increasing in size through time is known as ‘Cope’s rule’ – named after the infamous palaeontologist Edward Drinker Cope. Cope’s rule represents one of the most iconic and enduring ideas in evolutionary biology; its potential causes have been debated for centuries. Some scientists have suggested that the pattern of increasing body size through time could emerge just by virtue of the fact that most animal groups are descended from an ancestor that was small – in which case it would only be possible to get bigger. An alternative to this passive view is that natural selection actually favours large body size, perhaps by reducing mortality, or providing better protection from predators – an adaptive view. 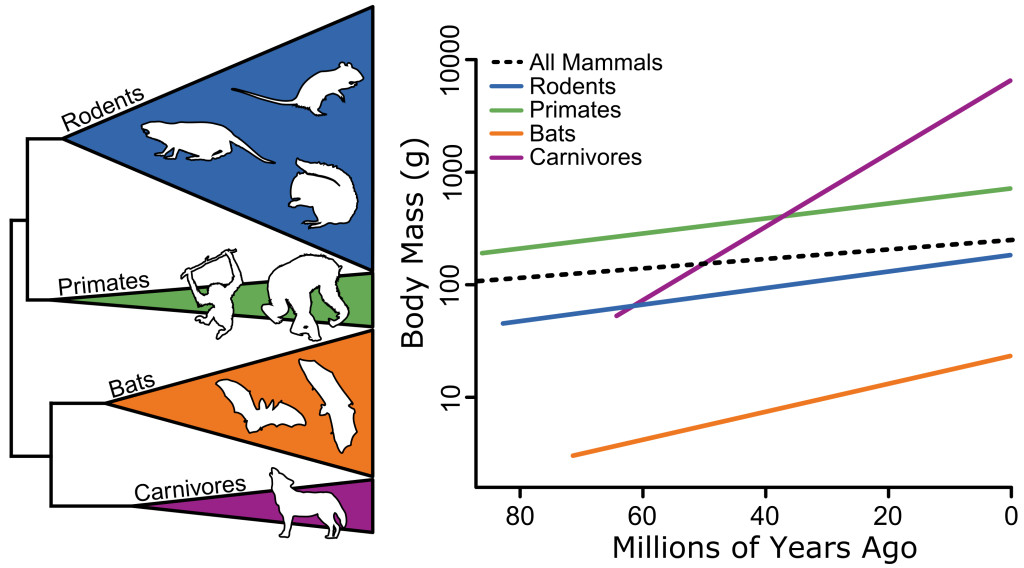 Fig. 1. Phylogenetic relationships between 4 major groups of mammals (rodents, primates, bats and carnivores) and their corresponding pattern of body size increase over time. Silhouettes from phylopic.org.

A study by Joanna Baker and colleagues from the University of Reading, UK, uses a novel approach to address this question.  Their new slant on revealing the evolutionary processes underlying Cope’s rule uses what are known as phylogenetic trees, which describe how species are related to each other and how ancestral species give rise to descendant ones over the course of millions of years, along with body mass data of contemporary mammal species. Mammals are a diverse class of more than 5,000 animal species including elephants, bats, mice, dolphins, tigers and humans.

The combination of a phylogenetic tree that describes the relationships among mammals (Fig. 1) and data on their current body masses can be used to study historical evolutionary processes that span back over more than the last 165 million years. Baker and her co-workers used a specially developed statistical method to describe how body size changed during mammal evolutionary history along the branches of the phylogenetic tree itself. This approach revealed that changes in size occurred at a much faster rate in some portions of the phylogenetic tree than others. Put another way, the rate of body size evolution has not been uniform during the evolutionary history of mammals.

Where the rate of body size evolution is fastest, it is an indication that natural selection is acting – some environmental force is acting that favours rapid change in body size. If rapid evolutionary changes in size occur routinely towards larger body size, it provides strong evidence for the notion that the resulting change towards larger size was adaptive. The results provide overwhelming support for this scenario – demonstrating that rapid and repeated instances of evolutionary change towards larger size have consistently shaped mammalian diversity, allowing mammals to attain bigger and bigger sizes over millions and millions of years of evolution.  The pattern is not consistent with a passive processes and holds in all, bar one, of the major mammalian groups including primates, rodents, carnivores and even bats (Fig. 1.).

These results highlight that natural selection has sculpted mammalian body size through time, with adaptive evolution towards larger size being widespread and common. But perhaps most pertinently it tells us, for mammals at least, that bigger really is better!