Mammalian cells are subjected to a plethora of exogenous and endogenous agents that cause damage to the cellular DNA. One of the major sources of such damage is oxygen-derived molecules and free radicals, collectively termed “Reactive Oxygen Species”; they cumulatively lead to oxidative stress and inevitable DNA damage (termed oxidative DNA damage). Such lesions are identified and subsequently repaired via a multistep repair process known as the DNA base excision repair (BER) pathway. The first step in this pathway is the recognition and excision of the damaged base by one of several DNA glycosylases (DGs). 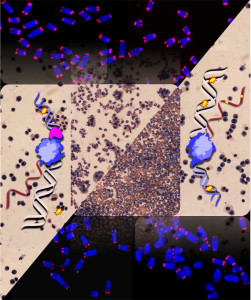 Mammalian cells possess multiple DGs (OGG1, NTH1, NEIL1, NEIL2 and NEIL3) with overlapping DNA repair specificities for repairing oxidative DNA damage. To understand the specific biological role of each of these DGs, researchers have previously generated animal models that lack one of these DGs (OGG1, NTH1, NEIL1 and NEIL3). In a recently published study (Chakraborty et al. 2015), we reported the generation and characterization of the first mice lacking another DG, Neil2 (Nei-like 2). The mice lacking NEIL2 were apparently normal, like those lacking each of the other four oxidative damage-specific DNA glycosylases. However, middle-aged to old animals accumulate spontaneous DNA damage, mostly in the active gene(s) that synthesize the various proteins needed for normal function and survival of the cells. This result is also consistent with our earlier findings of NEIL2’s role in preferential repair of oxidized lesions in active genes (Banerjee et al. 2012). Interestingly, in normal mouse tissues, NEIL2 was found to exist in a multi-protein complex with RNA polymerase II (RNAP II, the central player in cellular gene expression), along with proteins like CSB, TFIIH (both are already known to be involved in the repair of active genes) and several proteins involved in the BER process. Also, co-recruitment of NEIL2 and RNAP II was observed on the active genes, strongly suggesting a coupling of cellular gene expression and DNA repair for normal cell survival. The present study thus provides the first real-life evidence of active gene-specific repair in mammals. Frequent loss of telomere regions, which protect the DNA ends, was also detected in the cells derived from mice lacking NEIL2, further indicating Neil2’s role in maintaining DNA integrity. Mice lacking Neil2 are also highly susceptible to various inflammatory stress conditions, like treatment with lipopolysaccharide (an agent that elicit strong immune/inflammatory response in animals), or oxidative stress-induced inflammation. All this experimental evidence suggests NEIL2’s critical role in protecting mammals, particularly long-lived species like humans, by maintaining cellular DNA integrity, and an anti-inflammatory role to prevent disease progression. Oxidative stress and chronic inflammation are well known to play significant roles in several diseases, like cancer. Our group also reported the association of Neil2 gene mutations with an increased risk of lung cancer (Dey et al. 2012). Therefore, understanding the molecular mechanisms using such mouse models as an experimental tool may help to explain the linkage of oxidative stress and inflammation to various pathologies, and the knowledge gained from such studies should ultimately benefit human health.