Information of nociceptive stimuli given to the periphery is transmitted through the dorsal root to the superficial spinal dorsal horn, and then flows to the primary-sensory area of the cerebrum through the brainstem and thalamus, causing pain sensation. Such a nociceptive transmission is due to action potential (AP) conduction in nerve fibers and chemical transmission at neuro-neuronal synapses, both of which are targets of endogenous and exogenous analgesics.

Although nociceptive pain is alleviated by narcotic (opioids) and antipyretic analgesics (non-steroidal anti-inflammatory drugs; NSAIDs), chronic pain is resistant to these drugs and thus is treated by using analgesic adjuvants including local anesthetics (LAs), antiepileptics, α2-adrenoceptor agonists and antidepressants. Antinociception produced by antidepressants is explained by various mechanisms such as (1) activation of the noradrenaline- and serotonin-containing descending antinociceptive pathway to spinal dorsal horn from the brainstem by inhibiting the reuptake of their neurotransmitters, (2) involvement of a adrenoceptors, H1 histamine, serotonin, opioid and muscarinic acetylcholine receptors and (3) inhibition of voltage-gated Na+, Ca2+, NMDA-type glutamate-receptor and P2X4-type ATP-receptor channels. Na+-channel inhibition is mimicked by LAs, antiepileptics and α2-adrenoceptor agonists, and therefore is one of mechanisms for antinociception produced by the other adjuvants. Opioids and NSAIDs also exhibit a similar Na+-channel inhibition.

Voltage-gated Na+ channels located in a nerve fiber open in response to a depolarizing stimulus given to a point of the fiber, allowing an inward flow of Na+ ions to the cytoplasm, resulting in the self-regenerative production of AP, which in turn produces an outward current (depolarization) in a fiber point adjacent to the point, leading to opening another Na+ channels, and so on (AP conduction). In a bundle of nerve fibers exposed to air, AP conduction in each fiber produces AP current flowing through the high resistance such as air that can be measured as a potential difference, i.e., compound action potential (CAP), by using two electrodes placed on the nerve. The dissected frog sciatic nerve is a useful preparation for recording stably (> 1 hour) voltage-gated Na+-channel blocker tetrodotoxin-sensitive CAPs by using the air-gap method. Since this preparation lacks the neuronal cell body and the neuronal terminals, the effects of drugs on CAPs are not mediated by G-protein coupled membrane receptors. We previously reported that CAPs are inhibited by a variety of analgesic adjuvants (LAs, antiepileptics and α2-adrenoceptor agonists) and also by opioids and NSAIDs. Their inhibitory effects depended on the chemical structures of the compounds.

We investigated how frog sciatic nerve CAPs are affected by various antidepressants, and the results were quantitatively compared in efficacy with those of the other drugs that were reported previously. We found that antidepressants, duloxetine (serotonin and noradrenaline reuptake inhibitor, SNRI), fluoxetine (selective serotonin reuptake inhibitor, SSRI), amitriptyline (tricyclic tertiary amine), desipramine (tricyclic secondary amine), maprotiline (tetracyclic secondary amine) and trazodone (non-SNRI, -SSRI, -tricyclic and -tetracyclic antidepressant) concentration-dependently reduce the peak amplitude of CAP. These inhibitory actions were possibly due to voltage-gated Na+-channel inhibition.

The duloxetine and amitriptyline values were comparable to those of lamotrigine, carbamazepine (antiepileptics), dexmedetomidine (α2-adrenoceptor agonist), ropivacaine, levobupivacaine, pramoxine (LAs), aceclofenac, tolfenamic acid, meclofenamic acid and flufenamic acid (NSAIDs). The fluoxetine, desipramine, maprotiline and trazodone values were similar to those of oxymetazoline (α2-adrenoceptor agonist), lidocaine, cocaine, procaine, prilocaine (LAs), tramadol (opioid) and diclofenac (NSAID). The antidepressants’ IC50 values were smaller than ethylmorphine (opioid) and much larger than that of tetracaine (LA; Tab. 1). 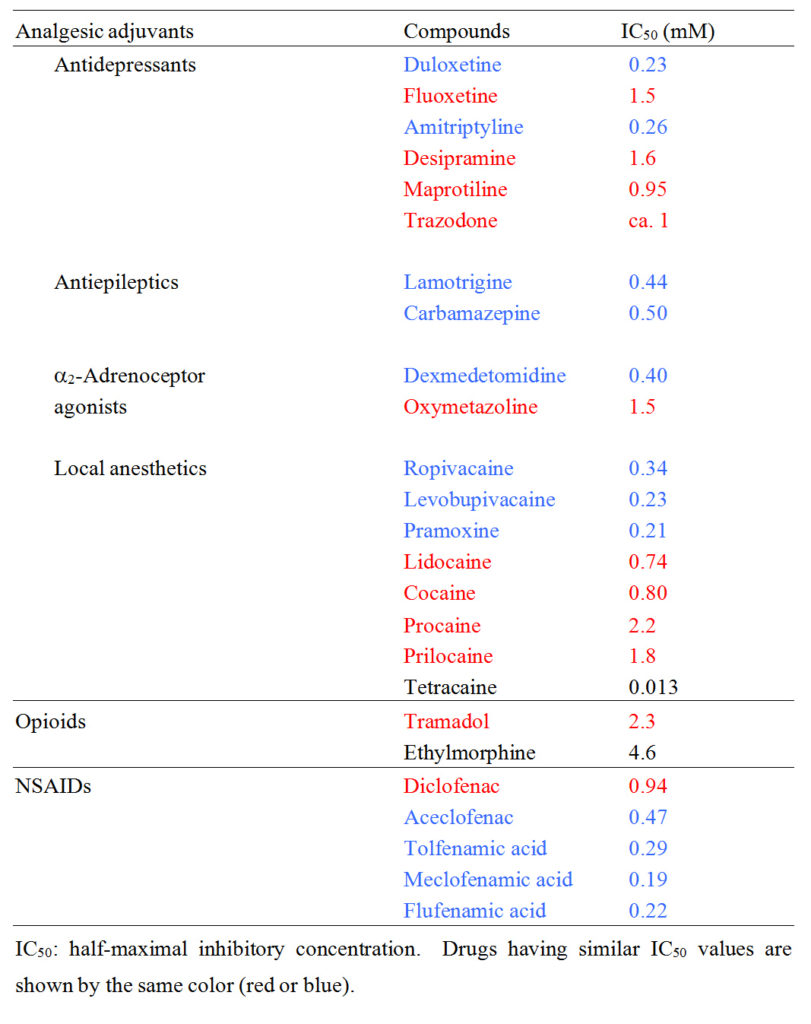