Nerves are required to repair the injured heart

Cardiovascular diseases (CVD), such as heart attack, are responsible for approximately 18 million deaths each year, which accounts for more than 30% of all deaths worldwide. CVD is the single greatest cause of death in humans killing more people annually than all forms of cancer combined. The reason for this is, in part, due to the inability of the heart to repair itself. Unlike other tissues such as the skin, bone or liver, which demonstrate a robust ability to regenerate following injury, the adult human heart is largely incapable of replacing damaged or diseased tissue. Instead the heart undergoes compensatory changes in response to injury that include the accumulation of fibrotic scar tissue and changes to the shape in an attempt to maintain sufficient blood flow throughout the body. These changes, while immediately beneficial are progressively detrimental to cardiac function and ultimately result in heart failure and death. Extensive resources have been directed toward developing interventions and treatments for CVD, yet for reasons that are currently unclear little progress has been demonstrated to date. Interestingly, an article published in 2011 in the journal Science demonstrated that while the adult heart is not capable of regeneration, the neonatal heart retains an innate ability to repair damage for the first few days of life. The mechanism driving this repair is not clear and neither is the reason why the heart loses the ability to regenerate rapidly after birth. We wished to address these questions so we could better understand why the human heart does not regenerate when other tissues, including the neonatal heart, appear to repair extremely well. 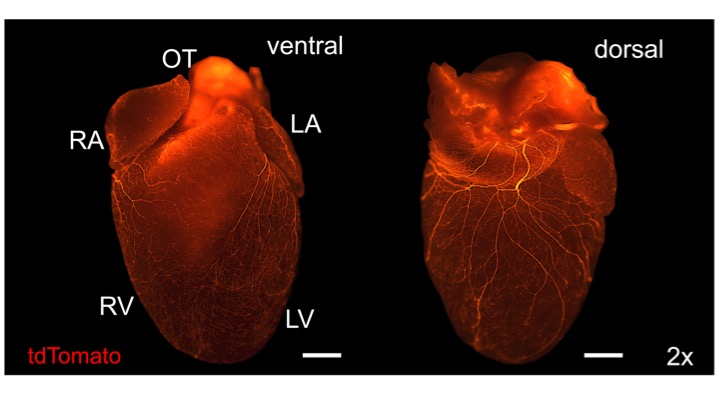 By looking at other biological fields that study regeneration competent tissues, such as the limb of the salamander or appendage of the star fish, we learned that these tissues are completely dependent upon a functional nerve supply. When nerves are damaged or removed from these tissues the ability to repair is completely lost. Like every tissue in the body the heart is heavily innervated, yet despite over 100 years studying heart physiology the neuroantatomy has not been comprehensively mapped though direct visualization. Peripheral nerves that innervate the heart are derived from a population of cells in the developing fetus referred to as neural crest cells. These cells and their decedents can be permanently marked, through genetic means, with a fluorescent dye, which with appropriate microscopy, allows us to visualize the entire neural network on the surface of the heart for the first time (Fig. 1). Using this technology, we discovered that the surface of the heart is more heavily innervated with sympathetic nerves than previously thought. 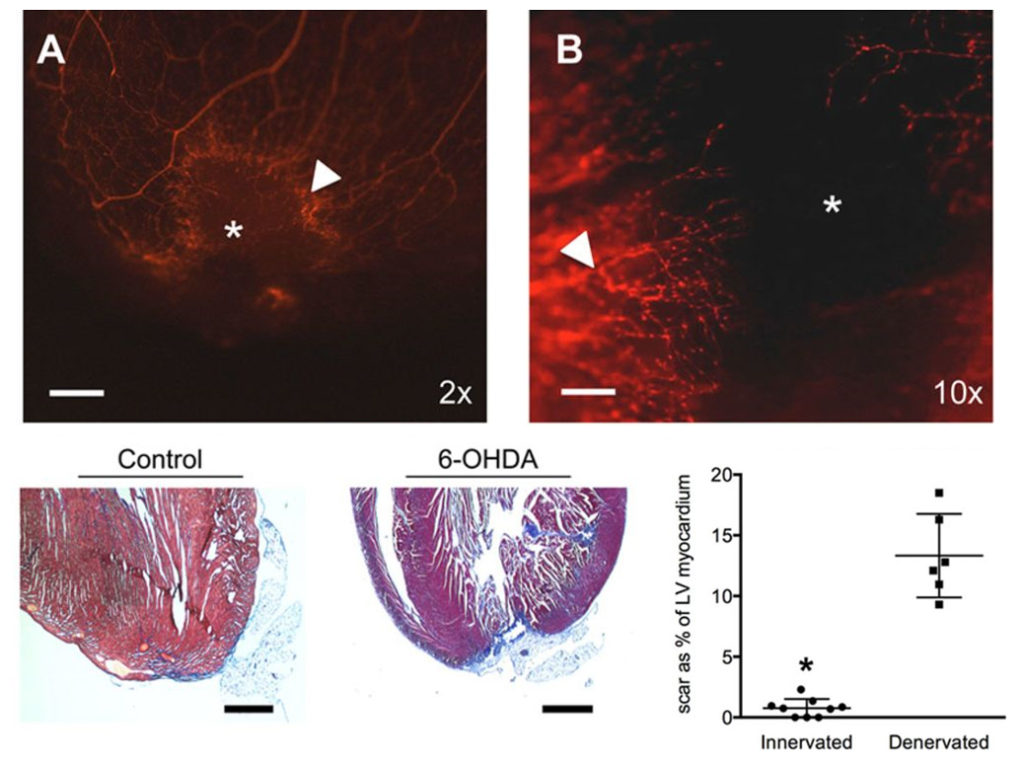 Moreover, using the neonatal surgical technique described in the Science report we successfully demonstrated that as the neonatal heart regenerated so was there a contemptuous regeneration of sympathetic nerves (Fig. 2). Critically, we confirmed that sympathetic nerves are required for this repair as chemical removal of these nerves resulted in a loss of the innate ability of the neonatal heart to regenerate (Fig. 2). This has important implications for the development of strategies that help repair the adult human heart. By understanding the biochemical contribution of nerves to the regenerative process and the intimate relationship between nerves, blood vessels and heart cells we may be able to develop strategies that mimic the neonatal program and actively repair or protect heart tissue from damage associated with CVD. Furthermore, we may be able to develop interventions that help diabetic and elderly patients suffering from progressive heart failure, both of which are associated with a progressive loss of sympathetic nerves.