Neurons share the same destiny irrespective of their location: A closer look at PP-MS pathogenesis

Multiple sclerosis (MS) is a disease of the central nervous system, caused by the reaction of immune cells against myelin, a membrane that surrounds the axons of nerve cells. MS is characterized by the presence of inflammatory lesions widespread in the white matter and gray matter of the brain, and by degeneration of neuronal cells. In the course of the disease, the layer of neuronal cells that lines the back of the eye (retina) can be damaged by both the presence of local inflammation or degeneration occurring along the visual pathway (the chain of neurons that connects the first neuron, localized in the retina, to the last neuron, localized in the cerebral cortex-see Fig.1 a). Primary progressive MS (PP-MS) is a rare form of MS, in which degeneration prevails on inflammation and in which, typically, there is a higher number of lesions in the gray matter than in the white matter.

Are cortical gray matter lesions (CLs) involved in the degeneration of the retina occurring in PP-MS? 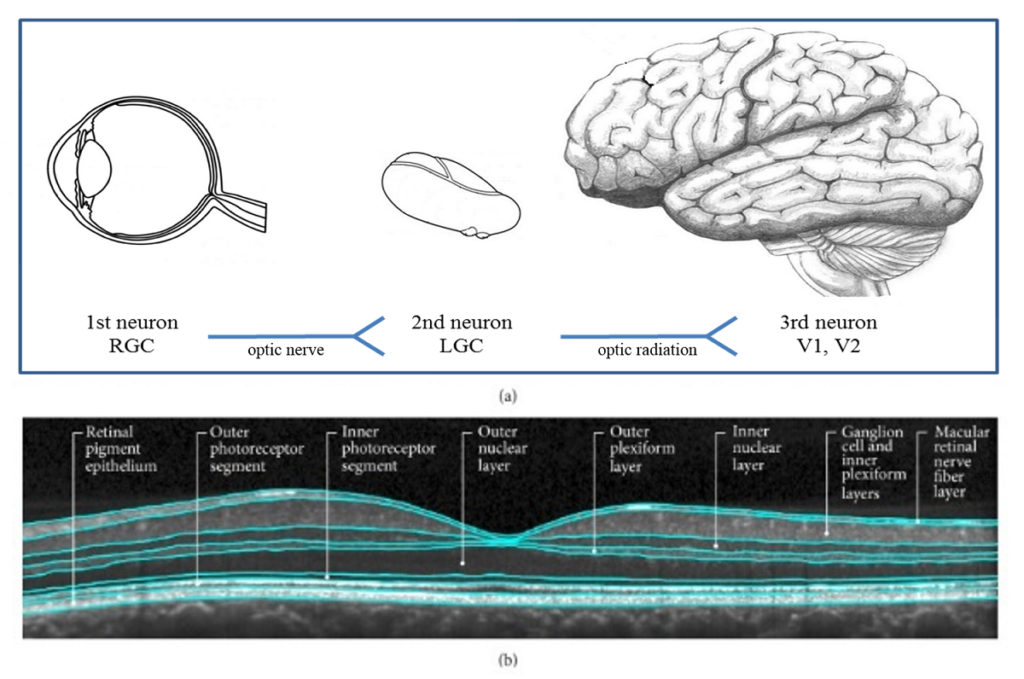 Fig. 1. Schematic representation of the visual pathway (a): retinal ganglion cell (RGC), projects through optic nerve and optic tract to the corpus genicolatum laterale (LGC) in the thalamus. The axon of the 2nd order neuron in the LGC projects through the optic radiations (ORs), to the primary visual cortex. Example of retinal segmentation in layers (b).

To answer this question we assessed the integrity of the retina in 25 patients with PP-MS, measuring both the retinal thickness in its entirety (expressed as RNFL-retinal nerve fiber layer) and the thickness of the retinal portion in which the bodies of the neurons are located (ganglion cell + inner plexiform layer-GCIPL)(see Fig.1 b). Both RNFL and GCIPL resulted smaller in patients than in healthy controls but, while RNFL thinning was associated with the decrease of the thalamus and visual cortex volume (two of the structures pertaining to the visual pathway), GCIPL thinning was associated, in addition to thalamic volume decrease, with the number and volume of brain CLs.

These findings suggest that, while the damage of the entire retina could be indirectly caused by the spreading  of damage across connected structures  along the visual pathway, the damage of the neuronal cells of the retina occurs in parallel to the damage of cortical neurons, although they are in two different anatomical locations.

The fact that the damage occurring in the brain cortex (in the entire brain cortex, not specifically in the visual cortex) is associated to the damage occurring to neuronal cells in the retina, indicates that something else, in addition to the anatomical connection with other damaged neurons,  is responsible for the retinal neurodegeneration.  We can speculate that a common degenerative mechanism affects all neurons, or at least, affects both neurons located in the brain cortex and in the retina.

The answer to our question is therefore: yes, CLs are associated with retinal damage. Such association cannot be explained only by the spreading of damage along  connected neurons but suggests that, in both locations (brain and eye), neuronal cells suffer from the same neurodegenerative process. Our results represent a valuable contribute to the increasing knowledge of MS pathogenesis. A deeper understanding of the disease mechanisms will, in turn, impact our possibility of disease monitoring and treatment.