Neurothekeomas are uncommon benign neoplasms with a peripheral nerve sheath origin. This tumor usually involves dermis and is described as a small, solitary, slow growing and reddish to flesh-colored nodule or papule. Neurothekeoma preferentially affects the central aspect of the face, the arms or shoulders of women in the second and third decades of life. 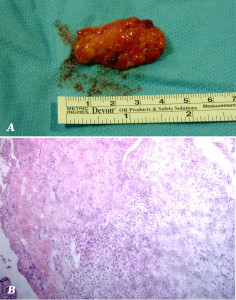 Fig. 1. Histology features
A- En bloc excision of the mass after recurrence.
B- Mixed form of neurothekeoma with lobules composed by cells in part fusal, in part epithelial and in part giant in a background of abundant myxoid stroma (hematoxylin and eosin, zagnification x40).

Usually nerve sheath myxoma has not aggressive local growth without tendency to metastases and recurrences are very uncommon. In fact several studies have classified nerve sheath myxomas into 3 groups based on cellularity, mucin content and growth pattern: a hypocellular or myxoid type, a hypercellular type and a mixed type. The hypocellular group consists of well-circumscribed multilobulated tumors usually located in the reticular dermis and often extends into the subcutaneous fat with a prominent myxoid stroma and positive to vimentin and S100-protein. The cellular types are composed of ill-defined nests and fascicles of cells, rather scant mucin and are negative to S100 and positive to vimentin and melanoma specific antigen (NK1/C-3). Based on these considerations mixed type and hypercellular type of neurothekeomas could show unusual characteristic of local recurrence tendency nevertheless a complete surgical excision with tumor margin free as occurred in our case.

Generally neurothekeomas are difficult to diagnose prior to performing a biopsy, due to the lack of specific clinical manifestations or imaging characteristics. The differential diagnosis of neurothekeoma should include other neural entities, such as schwannoma, true neuroma and myxoid neurofibroma. The effective treatment of choice is complete surgical excision with clear margins. No malignant transformation or metastases have been reported and local recurrence is extremely uncommon but possible especially for the cellular/mixed group. Although this is a rare type of tumor, the clinician should consider this entity in differential diagnosis, as it is imperative to distinguish it from malignant lesions, in order to avoid unnecessary aggressive treatment. Faced with a suspected diagnosis is therefore advisable to perform a punch biopsy of the lesion to determine with certainty the correct path of the therapeutic procedure.