The presence of gallstones is a highly prevalent, painful, and devastating disease. It is one of the leading causes of hospital admissions worldwide. Super-saturation and precipitation of calcium salts has long been considered the reasons for stones in the biliary system. However, the factors that initiate the exact site of stone formation and growth are still elusive. In a recent study, we identified chromatin externalization during neutrophil extracellular trap (NET) formation as a factor that serves as a nidus initiating the formation of gallstones and their growth.

First we analyzed the composition of the bile sludge, which represented small stone precursors in the biliary fluid. We found patchy deposits of extracellular DNA (ecDNA), large ecDNA aggregates and robust neutrophil elastase activity. We also observed ecDNA patches on the surfaces of larger gallstones. Analyses by micro-computed tomography (µCT) revealed areas with calcium crystal deposition in the vast majority of stones. These calcifications occurred in various appearances as a central core or dispersed, monolayered, or multilayered. 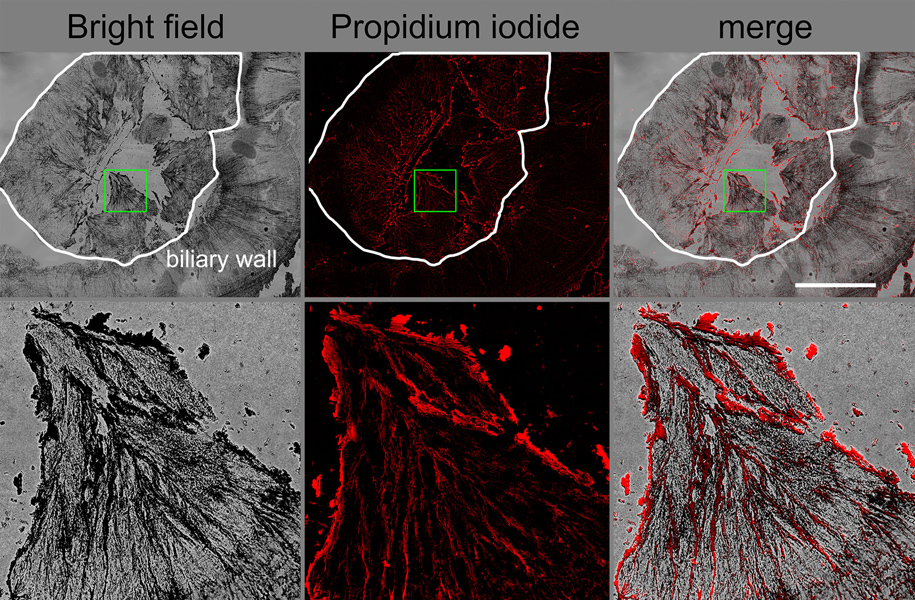 Fig. 1. Macrophotographs of a gallstone (inside the white borders) in a human tissue section of a gallbladder (upper panels) and a detail (green square; lower panels). Note, most of the DNA (red) stained with propidium iodide showed a non-nuclear appearance, which intuitively suggests the presence of NETs inside the gallstone. Scale bar, 1000 µm.

Our results challenge the hypothesis that cholesterol and calcium crystals alone serve as the ‘‘nidus’’ for cholelithiasis. Instead, we observed a shell-like distribution of calcium salts, ecDNA and neutrophil elastase activity. This argues for an episodic growth of the stones orchestrated by neutrophil attachment and NET formation.

Finally, we investigated cholesterol-crystal-dependent aggNET formation in vivo. We analyzed air pouches of mice that had been injected with cholesterol crystals leading to the formation of aggNETs. Treatment with colchicine, DPI (ROS production inhibitor) and Cl-amidine (a pan-PADI inhibitor) reduced the volume of aggNETs in the air pouches. Investigations of Ncf1-/- mice revealed that also ROS-dependent NET formation contributes to gallstone development and growth. Depletion of neutrophils by an anti-Ly6G antibody brought a strong tendency toward lower prevalence of gallstones. The sizes of the stones were also significantly lower in PADI4-deficient mice. Importantly, concentrations of bile salts, phospholipids, and cholesterol as well as hydrophobicity and the CSI did not differ between PADI4-deficient and wild mice.

In order to develop a pharmacological approach, we used the PADI4 inhibitor GSK484 (reducing chromatin de-condensation and consequently the sizes of the NETs) and the β1-adrenergic inhibitor metoprolol (reducing the activity and migration of neutrophils). Both agents decrease the prevalence of gallstones and reduce their cumulative sizes. Importantly, GSK484 and metoprolol also worked when gallstones had already been formed.

Our data indicate that NET is a factor responsible for the aggregation of calcium-salt and cholesterol crystals in the bile leading to the cholelithiasis. NET formation and crystal aggregation mutually activate each other and form a positive feedback loop. Neutrophils and NET formation have become promising therapeutic targets to prevent gallstones in people at high risk for recurrent cholelithiasis. Some drugs that have been widely used such as metoprolol for hypertension, and colchicine for acute gout, may, thus, be effective for the treatment of cholelithiais. Specific therapeutic approaches targeting NET formation, such as PADI4 inhibition, may also work.