Across the population, young people are at the highest risk of developing mental health disorders but are the least likely to receive the support they require. Barriers to care been attributed to a range of issues with traditional face-to-face counselling services such as cost, denial about the severity of problems, and embarrassment with self-disclosure of personal information. As such, a range of reforms are now looking at how technology can be used to improve rates of youth service use and clinical outcomes. 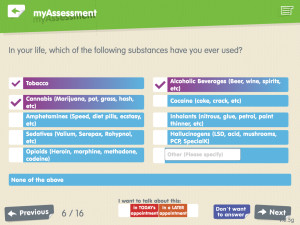 myAssessment is a newly developed psychosocial mobile app that provides a holistic assessment of the factors most relevant to poor mental health in young people. The app is used by the young person in the waiting room prior to their first appointment with a health professional. The app then creates an automated clinician summary with relevant risks and strengths highlighted, that the clinician can use in the subsequent face-to-face session.

A pilot trial of the app was undertaken at a youth mental health service in Canberra, Australia throughout 2014. The trial aimed to determine whether myAssessment was acceptable to all users, and whether it increased rates of self-disclosure of personal information, or affected other factors such as time efficiency or the development of the therapeutic relationship. Three-hundred and thirty nine youth and 13 clinicians participated across both phases of the pilot trial (Treatment-As-Usual vs Intervention). 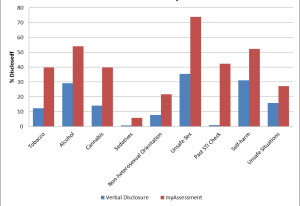 Fig. 2. Comparison of Self – Disclosure between “Verbal Disclosure” and “myAssessment”.

myAssessment was found to be widely accepted by both young people and clinicians. Compared to only face-to-face verbal disclosure, the use of myAssessment resulted in reporting of behaviors that were 2.78 through 10.38 times higher for a variety of substances (use of tobacco, alcohol, cannabis, sedatives, hallucinogens, and opioids), in identifying non-heterosexual sexual orientation, having had sex, an STI check, sex without a condom, having felt pressured to have sex in the past, having self-harmed, and in having put themselves in an unsafe situation. Participants who used the application also reported being less likely to lie on past experiences of being bullied, substance use, and self-harm. Use of the application also resulted in improved youth ratings of time efficiency in session and was shown to have no detrimental effect on the development of the therapeutic relationship.

Results indicate that technology such as ‘myAssessment’ can increase rates of self-disclosure and, therefore, provide an earlier and more comprehensive picture of young people’s risks without negatively impacting the therapeutic relationship. Obtaining such vital information early in the therapeutic process allows clinicians to provide young people the most targeted and appropriate care. This will result in improved health and wellbeing outcomes for young people and reduce the social and financial impact of untreated mental health outcomes.

The continued integration of new technologies into current service models is, vital to continue best meeting the needs of this vulnerable population group.