A similar sequence of events occurs during tissue regeneration: skeletal muscle regeneration is the process through which the tissue is repaired after usage, injury or disease. Upon muscle damage, a regenerative response initiate with the activation of the resident stem/progenitor cell, the satellite cell. However, although skeletal muscle can self-repair to a certain extent, it is unable to regenerate an extensive amount of tissue, once loss as consequence of trauma, congenital defects, surgery or denervation. In this context, tissue engineering holds promise for the replacement of muscle damaged and for the treatment of muscle diseases. 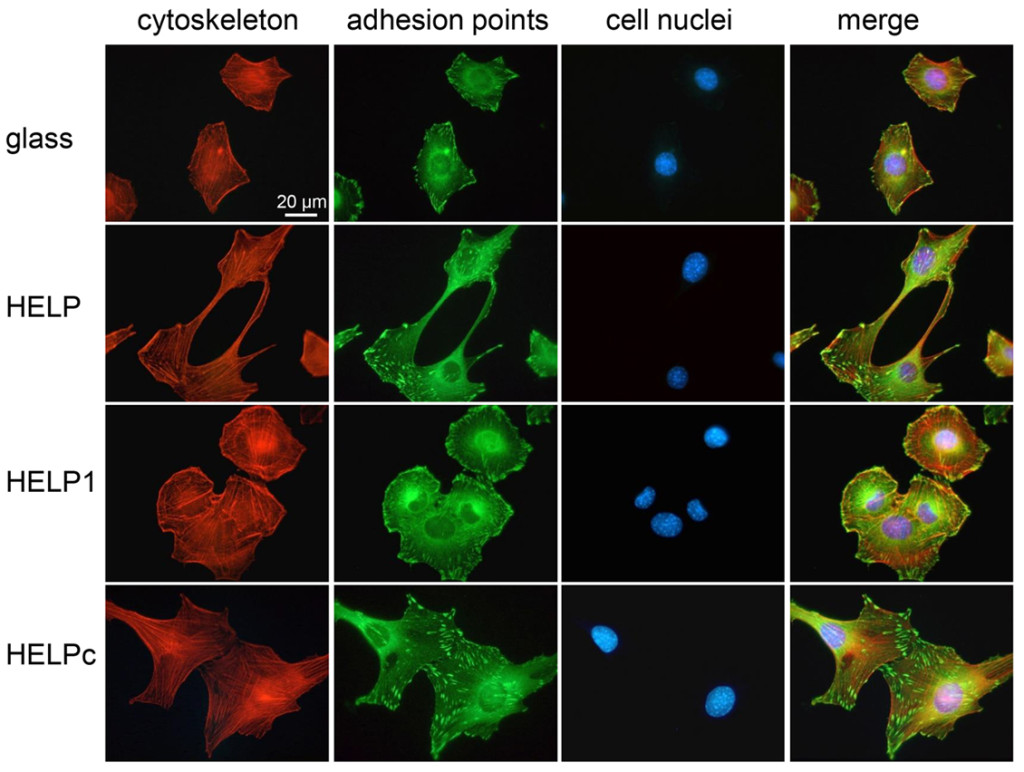 Biomimicry, the approach based on gaining inspiration from naturally occurring systems, is now considered a valuable and promising strategy for the design and fabrication of constructs to be employed in regenerative medicine and tissue restore. Recently, protein engineering has opened new perspectives for the design of advanced functional biomaterials able to induce specific responses of the biological system at the molecular level. A new generation of such smart compounds, the Human Elastin-Like Polypeptides (HELPs), were developed in our lab. They consist of recombinant artificial polypeptides based on specific aminoacid sequences found in human elastin, a structural component of extracellular matrix conferring elasticity to tissues. A key feature of the HELP polypeptides is their modular structure that allows the tailoring of the protein: the fusion of a bioactive domain of choice to the elastin-like backbone is expected to confer specific function to the recombinant protein.

In this study, we synthesized HELPc, a novel polypeptide of the HELP series by fusing, at its terminal, a sequence of type IV collagen, an extracellular protein abundantly expressed in basement membranes. The sequence employed accommodates two Arg-Gly-Asp (RGD) motives, the recognition sequence of the cell adhesion receptor called “integrins”, that are expected to alter both cell adhesion properties and the subsequent steps of muscle cells differentiation. We employed HELPc, as well as the two polypeptide variants of the same family (named HELP and HELP1), as adhesion substrates for C2C12 myoblasts, cells widely employed in differentiation studies, as they recapitulate, in vitro, most of the molecular events leading to the development of contractile myofibers. Cells adhered to all HELPs, where they assumed a morphology and cytoarchitecture that depended on the polypeptide sequence. Adhesion to HELPs stimulated at a different extent cell proliferation, the expression of differentiation markers and the fusion of aligned fibers into multinucleated myotubes. The different adhesion substrates significantly altered both myotubes stiffness and the maturation of muscle contraction machinery. Finally, the evidence that HELPs failed to stimulate an inflammatory response, when tested with human lymphocytes, is encouraging and will stimulate future research aimed to test the possibility of employing HELPs polypeptides in tissue engineering strategies.

The simplified structure of these biomimetic macromolecules consents a reductionist approach to directly link structure and function, thus allowing to causally relating the molecular mechanisms responsible for adhesiondependent modulation of cell functions. Moreover, the recombinant synthesis of these polypeptides represents an undoubted advantage over extracellular matrix extracts due to the possibility of unlimited material production with highly reproducible features.

In the whole, our results indicate HELP polypeptides as promising tools for investigating structure-functions relationship in skeletal muscle biology and, as a future development, a suitable biomaterial for skeletal muscle regeneration.