New function for the well-known lipids

Angiogenesis is the new blood vessels formation in adult tissues which share some similarities to growth of blood vessels during development called vasculogenesis. It is estimated that growth of any tissue to the sizes above 2-3 mm3 requires functional blood vessel network for proper supply with oxygen and nutrients as well as removal of unwanted products of metabolism and carbon dioxide. Angiogenesis plays a crucial role in many physiological processes such as menstrual cycle and wound healing. 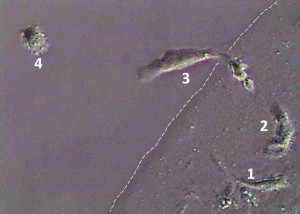 Fig. 1. Our newly designed method for investigating human endothelial cells migration. Live human cells were resuspended within the droplet of gelatinous substance mimicking connective tissue through which cells have to actively migrate in order to form new blood vessel. Some cells are still within the droplet (1 & 2), whereas some could be seen migrating out of the droplet (edge of the droplet is indicated by dashed line). At the end of the process cells could be seen completely migrated out of the droplet (4). By counting cells which were migrated under various treatments, we were to identify how effective the substances we have tested are in blocking endothelial migration.

In some cases angiogenesis participates in disease pathology such as tumour growth and currently intensive research is aimed to identify molecules that could be used as drugs for suppression of that process. To achieve that, better understanding of complex regulation of angiogenesis is needed. Angiogenesis is regulated through a complex interplay of many factors, which either activate or inhibit the process. Participation of eicosanoids (large family of lipid mediator molecules derived from polyunsaturated fatty acids, mainly arachidonic acid) in such regulation, although recognised as important, was never comparatively investigated in order to quantitatively assess contribution of individual eicosanoid classes. In this work, we have determined using in vitro human endothelial cells (those cells surround blood vessels and are the major structural components of the vasculature) to test cell ability to migrate (Fig. 1) and form precursors of blood vessels called “tubes” (Fig. 2).

Those two assays measure processes crucial for angiogenesis: migration of endothelial cells toward the tissue where new blood vessels are to be formed and initial formation of blood vessel precursors. Using these assays, we have determined that two specific eicosanoid lipids, prostacyclin (or PGI2) and prostaglandin E2 (or PGE2) are the main activators of angiogenesis. Those lipids regulate angiogenesis acting via their specific structures at the cell membrane called receptors (IP receptor, activated by PGI2 and EP4 receptor, activated by PGE2). The main regulator is found to be PGE2 which contributes to overall activation by 80%, whereas PGE2 participates by approximately 20%. 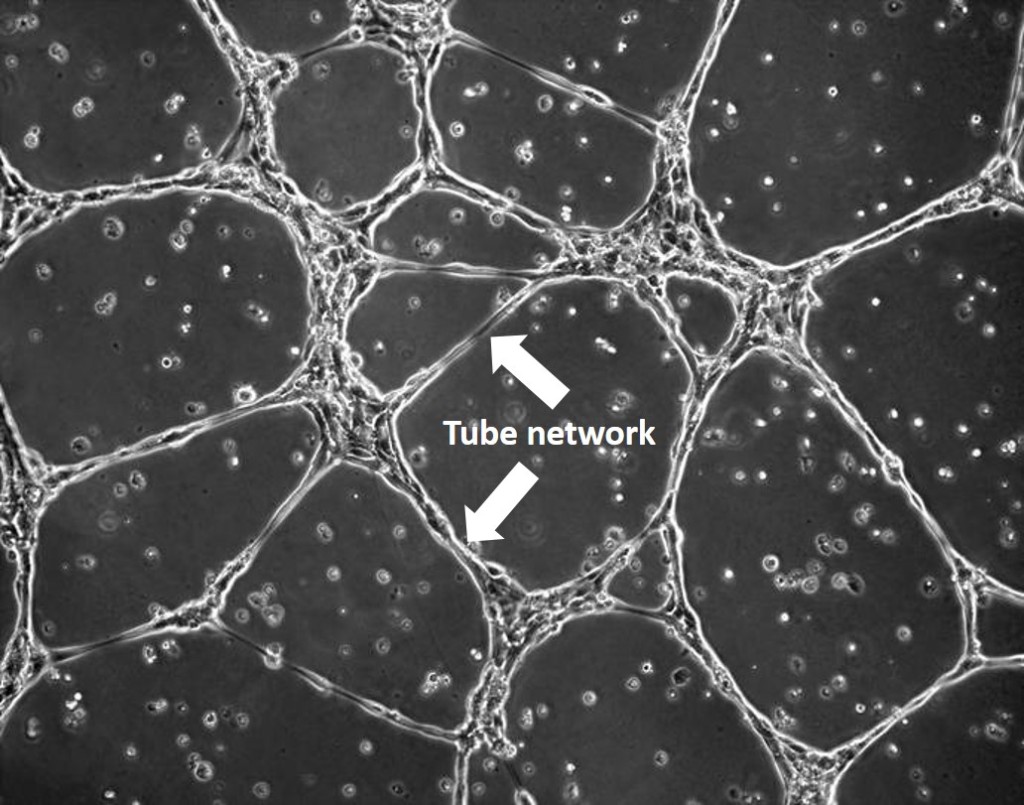 Such findings would help in better understanding of angiogenesis regulation and with design of new drugs aimed to block angiogenesis activation by eicosanoids, thus preventing pathological angiogenesis observed in many diseases including cancer.