The term nanoparticles (NPs) refer to particles with a very small size ranging in the nanometer scale. One nanometer (nm) is a unit of measure corresponding to a billionth of a meter. In general, the definition of a nanoparticle is an object with its three dimensions <100 nm. At this level, the very high surface area to volume ratio confers unique properties to NPs different from those seen in bulk samples of the same material. This is why NPs are so attractive in a variety of sectors, including biomedical sciences, pharmaceutical industry, medicine, electronics, cosmetics, food industry, etc. In fact, the number of applications of NPs in these sectors and others is growing very fast leading already to the presence of NPs in thousands of different products that we encounter in our daily lives. Consequently, human exposure to NPs is unavoidable and because they could enter the human body via different routes of exposure (inhalation, ingestion, skin) NPs can reach the blood circulation and come in close contact with (and even enter in) immune cells. Moreover, there is an increasing interest to use NPs as carriers for drug delivery in humans. Therefore, it is mandatory to evaluate the toxicity and potential risk that naked NPs may represent to humans as well as to understand their mode of action. Inflammation is probably the most undesired effects of NPs that have been reported in the scientific literature. Inflammation is a normal biological response that could lead to different diseases when deregulation occurs. 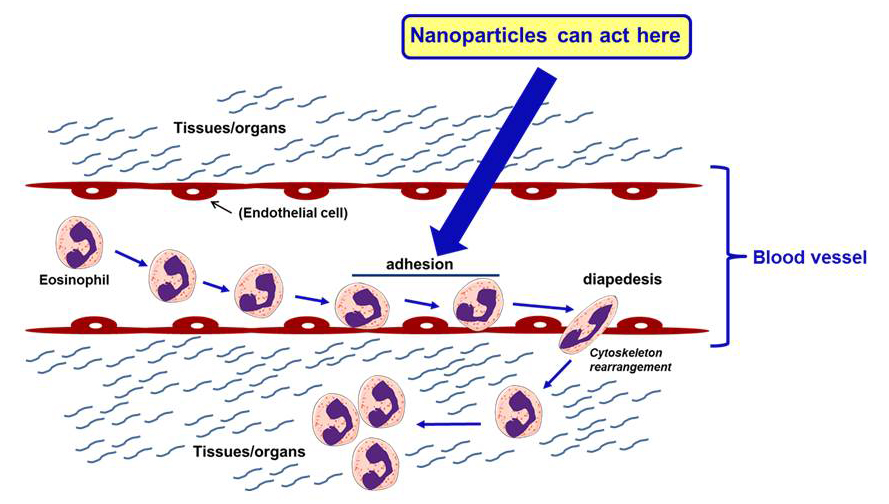 Fig. 1. Cartoon illustrating where nanoparticles can potentially act during the inflammatory process involving the migration of eosinophils from the blood circulation to tissues and/or organs.

Eosinophils are a variety of white blood cells (or leukocytes) known to fight against multicellular parasites and some infections in vertebrates. Under normal conditions, eosinophils represent about 1-3% of all leukocytes in human blood where they persist for no more than 12 hours, but can survive several days in tissue and some organs including spleen, ovary, uterus, etc., but not in the lungs. In fact, the presence of eosinophils in bronchoalveolar lavages and/or lungs (and some other organs) is used as a marker of inflammation and is generally associated with different inflammatory diseases, including asthma. To quit the bloodstream, eosinophils have to start rolling onto the endothelium of blood vessels, adhere onto endothelial cells, migrate through them via diapedesis where their cytoskeleton is rearranged and then reach different tissues/organs.

Most of the studies administrating NPs into animal airways reported the presence of an increase number of eosinophils in the bronchoalveolar lavages and/or lungs. Despite this, it is surprising that the direct roles of NPs on the biology of eosinophils, as well as their mode of action, are poorly documented. Therefore, we recently initiate some studies in order to answer whether or not NPs could be added as new agents altering the biology of human eosinophils and the answer is yes! Without going into the details of the experimental procedures, we have decided to determine if several kinds of NPs could modulate the ability of eosinophils to adhere onto a cell substratum similar to that composing the blood vessels. Why? Because this represents one of the major steps for an eosinophil to quit the bloodstream to subsequently migrate and reside into organs, including lungs (Fig. 1). We found that several, but not all, NPs could increase the adhesion of eosinophils at concentrations that do not alter their cell viability. This indicates that NPs could alter the biology of eosinophils and possess potential pro-inflammatory effects. We are now studying the role of NPs on other eosinophil functions as well as their mode of action and we are confident to make important discoveries in near future in this new area of research.