It has been shown earlier that one of the proteins from the Saccharomyces cerevisiae cell wall (glucantransferase Bgl2) forms amyloid structures after isolation from cell wall under acid pH conditions. It is known that the acid treatment of yeast cells leads to the occurrence of an apoptotic phenotype and induction of general stress response pathways that may include the mechanisms of cell wall integrity control. The capacity of potentially amyloidogenic regions in the Bgl2p sequence to generate amyloid formation was examined using the bioinformatics analysis. 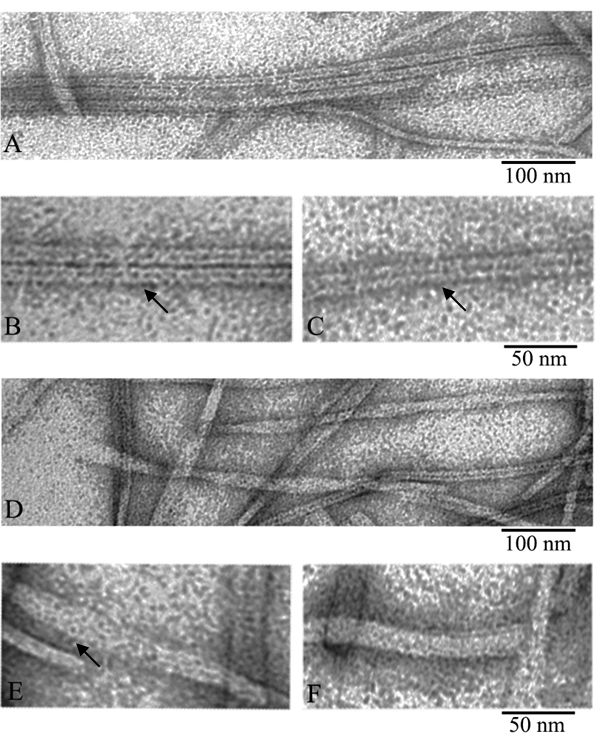 The analysis of potentially amyloidogenic regions capacity to form amyloids and understanding of the dependence of amyloid properties on different conditions (synthesis, pH, temperature, ionic strength, etc.) are important for the understanding of general mechanisms of amyloidogenesis in proteins. The process of amyloid formation was investigated for amyloidogenic fragment AspNB predicted in Bgl2 (residues 166–175, VDSWNVLVAG with unblock termini) and homologous peptide with a substitution of aspartate for glutamate in position 2 GluNB (VESWNVLVAG) by different methods. The comparison of the data, obtained for the two peptides, allowed us to conclude that substitutions of D for E affected the process of amyloid formation: AspNB forms amyloid fibrils faster than GluNB. However, such mutation has no effect on the morphology of mature amyloid fibrils.

The most essential result from the EM studies is that in spite of strong polymorphism of fibrils, in all cases the main building element of a fibril of any morphology is a ring oligomer with the external diameter of about 6–8 nm, the internal diameter (of the hole) of about 2–3 nm and the height of about 3–4 nm (estimated by the bending sites of a single fibril (Fig. 1)). Such oligomers associate with each other either ring to ring or slightly overlaying each other.

The data from X-ray analysis show that fibrils formed from ring oligomers have a cross-β structure. This is consistent with our proposed model of oligomer structure and the suggested mechanism of packing of oligomers in fibrils. According to the proposed model, the ring-like oligomer includes β-strands as well as 12 β-sheets. This quantity is sufficient to produce reflections characteristic of cross-β structure.

According to a simplified scheme, the formation of fibrils proceeds as follows: a monomer → a destabilized monomer → an oligomer → a fibril. The weakest point in this scheme is the oligomer. For many amyloidogeneic proteins or peptides, oligomers can be observed at the initial stage of fibril formation; oligomers (Aβ peptides, insulin) frequently have ring morphology. It is unclear what occurs at the stage ‘an oligomer → a fibril’. In what way are fibrils formed from ring-like oligomers? We believe the oligomer is quite probable to be the basic unit of a fibril. Ring-like oligomers can form any morphology of a fibril, i.e. under certain conditions polymorphism of fibrils of the same preparation can be explained by different ways of interaction of oligomers (Fig. 2). It is simpler to explain the changes in morphology of fibrils even upon changes in different conditions of fibril formation (pH, ionic strength, temperature etc.).

It can be assumed that Bgl2p is also conformationally labile. This assumption is confirmed by the disclosed ability of Bgl2p to form fibrils of various morphologies (nets or bundles) under different conditions (in cultural media or in water after isolation from the cell wall).