Nonalcoholic fatty liver disease (NAFLD) is emerging as one of the most common chronic liver disease, affecting up to 30% of the general population worldwide. NAFLD is characterized by hepatic fat accumulation exceeding 5% of liver weight, in the absence of alcohol abuse and without other identifiable causes of liver. NAFLD is the hepatic manifestation of metabolic syndrome, particularly associated with obesity, dyslipidemia, insulin resistance, glucose intolerance and type 2 diabetes mellitus. The spectrum of clinical manifestations ranges from simple steatosis to nonalcoholic steatohepatitis (NASH), which increases the risk of the end-stage liver disease. Currently, NASH is the third most common indication for the liver transplantation in the United States, just behind hepatitis C and alcoholic liver disease, but it is estimated to become the first one between 2020 and 2025. 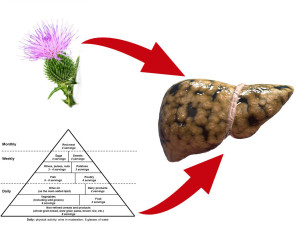 The NAFLD treatment is based on lifestyle intervention. In this way, Mediterranean diet has proved to be associated with a positive clinical outcome, leading to the improvement of insulin sensitivity and lipid profile and to the reduction of cardiovascular risk.

Several studies describe antioxidant and protective effects of Silybum marianum or milk thistle (MT) in liver diseases. This is an annual to biannual plant of the family Asteraceae, cultivated in Europe and in particular in the Mediterranean area. Silybin, a component the extract of MT, is a potent antioxidant that modulates inflammation and fibrogenesis and interferes with intra-hepatic glycolysis and gluconeogenesis. Silybin treatment attenuated hepatic necrosis and diabetes in the NASH animal models and type 1 diabetes mellitus, and showed benefits in poorly controlled type 2 diabetes patients. Literature report that the silybin phytosome complex (silybin plus phosphatidylcholine)  co-formulated with vitamin E, improve the transaminase levels and insulin resistance in NAFLD.

Considered this background, we have evaluate the effects of this silybin complex associated with Mediterranean diet, in the NAFLD overweight patients.

We randomized our patients into three groups of ten (A, B and C group). A personalized Mediterranean hypocaloric diet (1400-1600 kcal/day) was given to the patients of Group A. The proposed food plan included carbohydrates (50-60%), proteins (15-20%, of which about 50% were vegetable proteins), mono- and poly-unsaturated fats (less than 30%), saturated fat (less than 10%), cholesterol (less than 300 mg/day) and fibers (25-30 g/day). In association with the diet, the Group B patients were given the silybin complex daily for 6 months. A daily physical activity was strongly recommended. Finally, the control group (Group C), that refused any pharmacological and nutritional treatment, was also studied.

We reported the improvement of anthropometric parameters and lipid profile, in all patients that followed Mediterranean diet (Group A and B). The diet also led to the reduction of intra-hepatic fat accumulation, confirmed by echographic evaluation. However, NAFLD overweight patients treated for 6 months with the Mediterranean diet and the silybin complex (Group B), showed also the improvement of insulin resistance. No changes are reported in the control group.

Our data support the idea that an integrate approach based on lifestyle interventions, and in particular physical activity and diet, integrated with antioxidant as a silybin complex, can be effective to treat overweight NAFLD patients. Finally, Mediterranean diet can play a pivotal role in the prevention and the treatment of NAFLD.