Recently, a large number of novel psychoactive substances (NPSs) have appeared on the European market. Their growing diffusion has become matter of worldwide concern and alarm for public health authorities, legislators, and clinical health specialists. They are synthesized in lab by introducing slight modifications to the chemical structure of existing illegal substances registered in the European Union, thus these NPSs circumvent controls and can be easy sold and bought. In addition NPSs are not detectable by standard analytical toxicology procedures. By the end of 2017, more than 670 NPSs have been reported to the European Monitoring Centre for Drugs and Drug Addiction and synthetic cathinones (SCs) represent the second largest group of NPSs acting as potent central nervous system (CNS) stimulants similarly to classical amphetamines. SCs are typically sold as “legal” replacements for amphetamine, MDMA and cocaine. One of the most commonly abused SCs is 3,4-methylenedioxypyrovalerone (MDPV) that has caused several intoxications and deaths, despite its short presence on the market. It is highly lipophilic and able to cross the blood-brain-barrier, thus high MDPV concentrations can be achieved in the CNS. MDPV exerts its psychostimulant effects by selective and very potent inhibition of norepinephrine and dopamine reuptake namely norepinephrine (NET) and dopamine (DAT) transporters, respectively. Currently, little data exist about the MDPV metabolism in humans and more specifically on the neurotoxicity induced by MDPV metabolites in particular. In vitro and in vivo studies identified 3,4-dihydroxypyrovalerone (3,4-Catechol-PV) as one major MDPV metabolite and as potent uptake blocker at DAT and NET. Apart from the effects of these compounds on the monoamine systems, little is known about other molecular mechanisms of action in the brain.

Our results demonstrate that 3,4-Catechol-PV caused a significant concentration-dependent decrease of cell viability in both cell types after acute exposure (24-48 h) with the dopaminergic neurons showing an early susceptibility compared to undifferentiated neuronal cells (Fig. 1). This investigation also showed, for the first time, using live cell analysis, that 3,4-Catechol-PV induced, not only a cell density decrease in both cell types, but also morphological alterations in the remaining live cells consisting of cytoplasmic vesicles, loss of the typical cell shape, neurites retraction that became more pronounced with time incubation and drug concentration (Fig. 2A). Moreover, an increase of caspase-3 activity, an “effector” caspase associated with the initiation of the apoptotic cell death cascade, indicate that the apoptosis may be an important process involved in the toxicity mechanism of these cells following 3,4-Catechol-PV treatment (Fig. 2B).

Altogether, these findings demonstrate the cytotoxicity of 3,4-Catechol-PV on the neuronal cell line of human origin (SH-SY5Y) both differentiated and undifferentiated, suggesting the potential involvement of this metabolite in the toxicity induced by the synthetic MDPV cathinone.

Moreover, these results indicate a different cell susceptibility over time to 3,4-Catechol-PV: higher in differentiated cells after 24 h-exposure, whereas higher in undifferentiated cells after 48 h-exposure. It is thus conceivable that the dopaminergic system may be one major target for acute 3,4-Catechol-PV neurotoxicity. The study also evidenced that the critical concentrations of 3,4-Catechol-PV (10-500 μM) capable of inducing neurotoxicity, may be relevant considering the levels (3.4-8 μM) of the parent compound MDPV determined in the brain of postmortem cases. 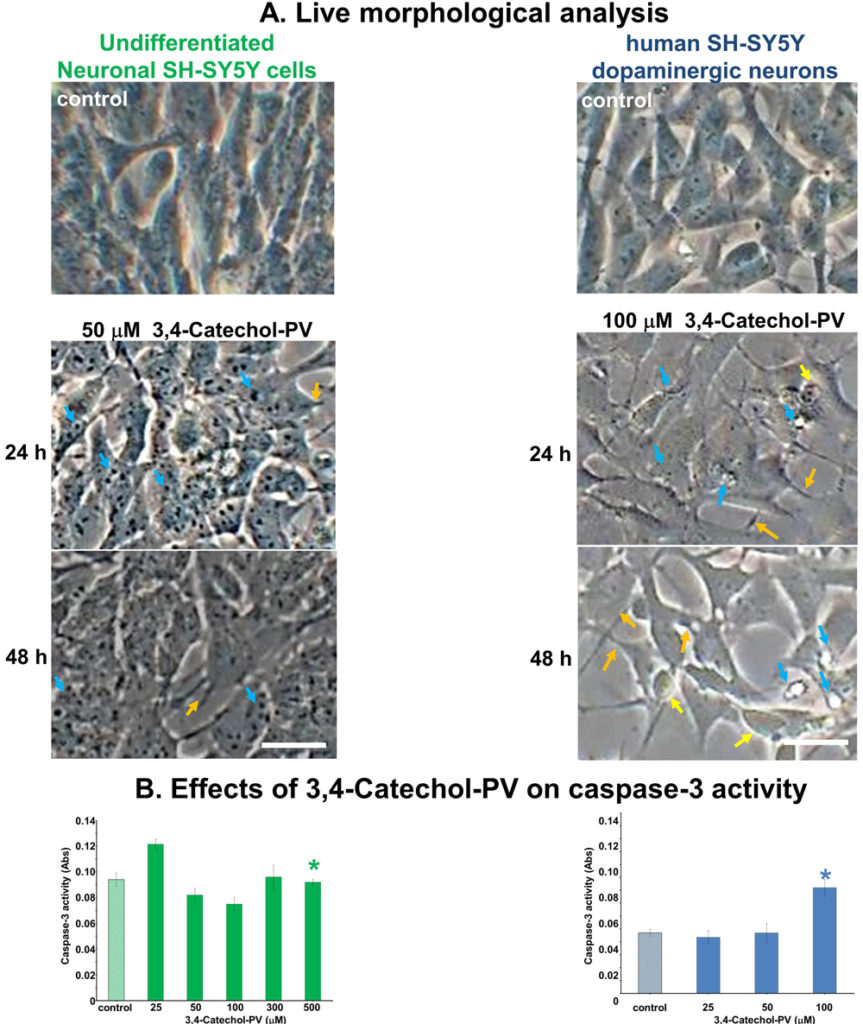 Human neuronal cell (SH-SY5Y) model is a potential predictive cell-based in vitro system that permits to clarify the toxicological profile and neurotoxic mechanisms of SCs and their metabolites, considering the consequences on human health associated with the use of these NPS and their continuous placing on the market.