Newborn pulse oximetry screening is not just for heart defects

Measuring the arterial oxygen content (saturation) of the blood is easily done by pulse oximetry. In newborn infants a probe emitting and absorbing light is put on the hand or foot (or booth) and a reliable result is obtained in a few minutes (figure). Over the last decade, universal pulse oximetry screening (POS) has gained increasing acceptance as a useful tool for the early detection of critical congenital heart defects (CCHDs) in apparently healthy newborn infants. 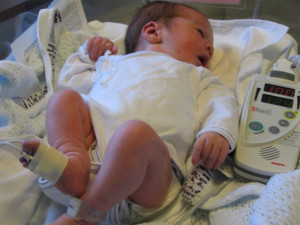 A substantial percentage (up to one third) of CCHDs may be missed during the routine clinical examination of newborn infants before they are discharged home. Then a high risk exists that the baby will be readmitted in a life threatening collapse. Such cases contribute substantially to death in the neonatal period. One important reason why CCHDs could be overlooked is that the infant may have a sub-normal arterial oxygen saturation without visible blue color (cyanosis) of the skin (they are not “blue babies”). Such defects may be detectable by POS. When POS is combined with routine clinical examinations, 90% of CCHDs may be detected before discharge.

Some hospitals routinely screen children on the first day of life, and some more than 24 hours after birth unless the infant is due to be discharged earlier. The main reason for not screening on the first day of life is to minimise so called false positives (conditions other than CCHDs) while the main argument for first-day-of-life screening is that early detection of CCHDs means that other diagnostic procedures can be carried out more quickly.

Minimising false positives is a prerequisite for optimising screening programmes, but this may not be the case for newborn POS. While similar sensitivity for detecting CCHDs has been found when screening is undertaken before and after 24 hours, a significantly lower false positive rate is obtained when the screening is carried out more than 24 hours after birth than earlier. Although later screening may reduce the false positive rate to one-tenth, which at first glance may seem impressive and beneficial, it may not actually be a good thing. False positives, in fact, to a large extent represent conditions in need of medical intervention, especially respiratory disorders and infections. In addition some non-CCHDs are detected. Extracardiac conditions detected by POS, especially in screeening first day of life, by far outnumber the cases of CCHDs detected. This side-effect of false positives may, therefore, be an important added advantage.

False positives generated by POS screening may waste resources, for example by leading to unnecessary referrals for echocardiography. This may, however, occur at an acceptable level. For example, a false positive rate of 0.5% as reported for first day of life POS screening, would generate less than one extra echocardiography per month in a hospital with 2,000 deliveries a year. Further, when low oxygen saturation is obviously caused by an extracardiac condition, the infant may not be referred for echocardiography.

Up until now, newborn POS has only been used for heart screening. However, we need to redefine POS as a screening for all types of disorders with true early postnatal sub-normal oxygen saturation. When we make decisions about the optimum time to carry out POS, we need to balance the risk of false positives against the likelihood of a timely diagnosis. This apply to CCHDs as well as potentially severe non-cardiac diseases. An early diagnosis is a good starting point for successful treatment and early screening promotes an early diagnosis. Future research should evaluate POS as a screening tool for detecting non-cardiac disease in the same way that it is currently used for CCHDs.