New research shows that the stimulatory effect of atmospheric CO2 on plants depends on soil nitrogen and on the microbes that can help plants get it.

It’s common knowledge in horticulture that pumping extra carbon dioxide into a greenhouse stimulates plant growth, but there has been great debate about whether people pumping carbon dioxide into the atmosphere through burning fossil fuels stimulates plant growth around the planet. Some hope that such a “CO2 fertilization effect” will increase the productivity of farms and forests. Indeed, recent research suggests that the earth has become greener over the past several decades primarily as a result of increases in atmospheric CO2 concentrations. However, as most scientists are quick to point out, the greening of the earth is not occurring everywhere, and critical questions about the causes and persistence of CO2 fertilization effects remain unanswered. 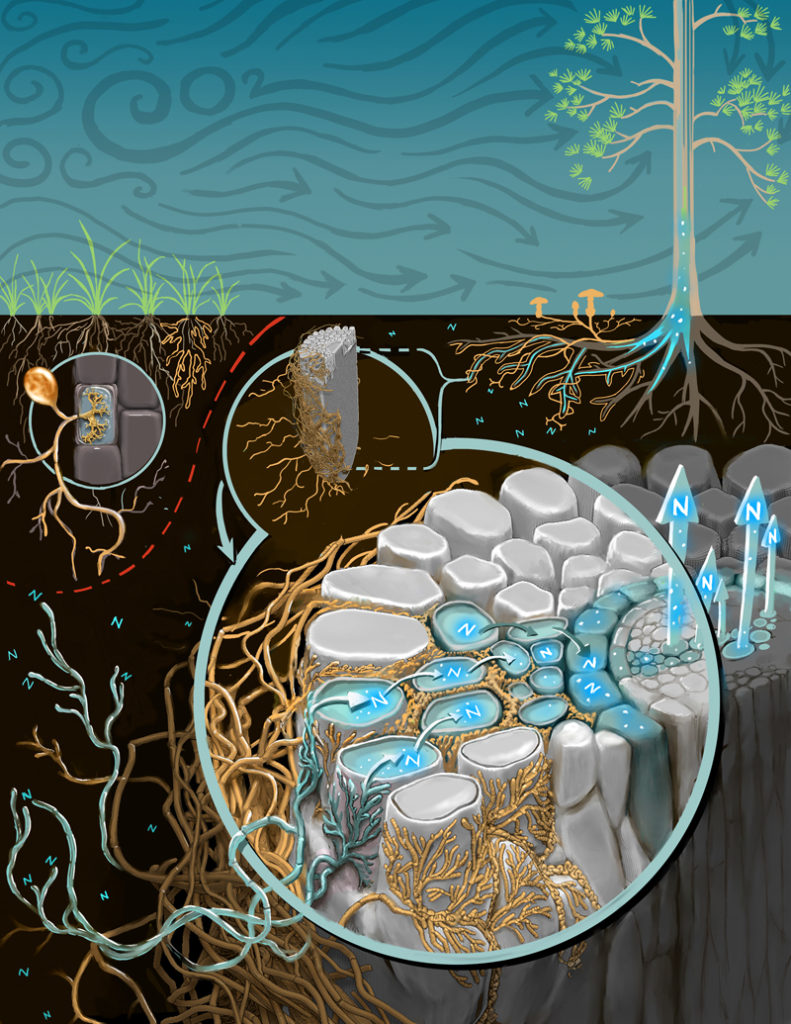 Fig. 1. Ectomycorrhizal fungi (illustrated as the mushrooms connected to the roots of the tree) increase the uptake of nitrogen by the plant, even when that nutrient is only limitedly available in soils. Arbuscular mycorrhizal fungi (associated with the grass roots on the left) do not provide that advantage to their host.
Art by Victor O. Leshyk, www.victorleshyk.com, Twitter: @victorleshyk

Experiments demonstrate that some plants sustain positive growth responses to elevated CO2, but many others do not. Such divergent responses fuel debate about the role of plants in slowing climate change as atmospheric CO2 concentrations rise. In a paper published this week in Science, scientists from Imperial College and three collaborating institutions have begun to answer this decades-old question. The team synthesized 83 experimental studies from across the globe that increased CO2 concentrations to about 650 ppm (currently we are at 400 ppm) and found that plants grow more with extra CO2 if there is plenty of available soil nitrogen, confirming much past work and thinking on the topic. But they also showed that some plants can respond even when native soil N availability is low – that is, if the plants have the right microbial partners to help them access that critically limiting nutrient.

“Rising CO2 is not a universal fertilizer, but neither is nitrogen limitation a universal restriction on the CO2 response. The truth is in the middle, and microbes play a key role”.

Mycorrhizal symbiosis
Most land plants associate with mycorrhizal fungi. Within this symbiosis, the fungi provide their host plant with nutrients and water and receive carbohydrates in return. Mycorrhizal fungi are more effective in taking up nutrients than plant roots owing to their ability to explore a greater volume of soil and in some cases, produce enzymes that release nutrients from soil. Consequently, mycorrhizal fungi are not only critical for plant growth in nutrient-limited systems, but important determinants of plant responses to environmental changes such as increasing CO2 concentrations.

“This species-specificity of the symbiosis makes it easy to determine whether an ecosystem is dominated by ecto- or by arbuscular mycorrhizal fungi” noted lead author and Ph.D. student César Terrer. “By categorizing ecosystems based on their type of dominant mycorrhizal fungi, we were able to determine that mycorrhizal type influences the magnitude of the CO2 fertilization effect”.

Nitrogen availability
In most temperate and boreal ecosystems, nitrogen (N) is the primary element limiting plant growth. Without enough N, it is thought that plants will be unable to respond much to rising CO2. Indeed, several experiments showed no or a transient plant growth response to elevated CO2, except when N was added. However, some N-limited ecosystems have shown a significantly positive growth response to elevated CO2, and the reasons have puzzled scientists for many years. Based on data from 83 experiments, this new study demonstrated that the CO2 fertilization effect increased plant biomass by ~30% in ecosystems dominated by ectomycorrhizal fungi, but had little to no effect in ecosystems dominated by arbuscular mycorrhizal fungi where soil N availability was low (Fig. 1). At high N availability, both groups responded positively to elevated CO2. So either way, plants need N to respond to high CO2, whether they find it readily available in the soil, or whether their mycorrhizal partners can help them get it.

Will fungi influence ecosystem feedbacks to the climate system?
Land ecosystems currently absorb about 30% of human CO2 emissions, without which climate change would be happening even faster than it is now. The future of this terrestrial carbon sink depends on carbon accumulation by ecosystems through plant growth, but also on carbon losses from ecosystems through decomposition, which the current study did not address. For carbon input through plant growth, this new research shows that it is essential to take into account mycorrhizal fungi, and suggests that the next generation of global carbon cycle models should include mycorrhizae as an important control point on plant responses to rising CO2 in the atmosphere. Fortunately, it is reasonably well known which plants live in symbiosis with arbuscular mycorrhizal fungi, and which associate with ectomycorrhizal fungi, so adding mycorrhizal type to earth system models is a tractable challenge.