Non-invasive prenatal testing (NIPT) is growing more and more popularand is advertised worldwide by dozens of companies as a safer alternative to invasive testing. In most countries it is paid for privately by the patient. But its price varies hugely from country to country, even within Europe. I wondered why that was and decided to investigate.

In Germany, a basic NIPT kit costs between €200-300. Germany is a wealthy country, and that’s relatively affordable. But in Serbia, Croatia, Bulgaria and other Southern European countries, such a test starts at €450 and can cost as much as €1000. And these are countries where the average wage is far lower than it is in Germany. 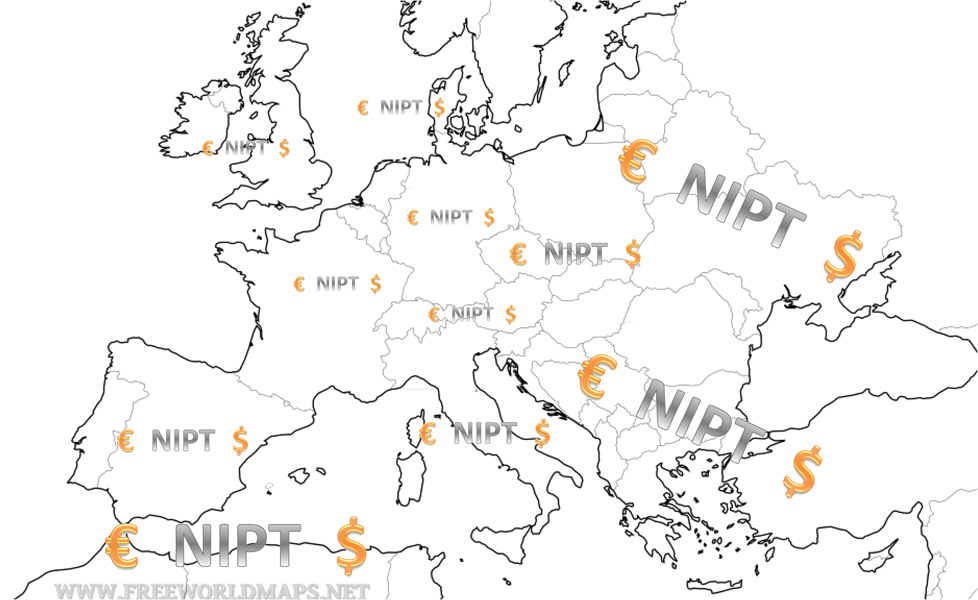 Fig. 1. Map of Europe taken from www.freeworldmaps.net including catchy schematic overview on principle pricing differences of NIPT for advise-seeking pregnant women. The basic tendency that the test is offered for higher prices in less wealthy countries is shown.

When asking one of the manufacturers of NIPT kits in Germany why this price difference existed, the reply was that they were unaware of this situation, but that it could have something to do with the pricing policies of local distributors. Their lack of awareness was unconvincing – even a quick internet search was able to substantiate the facts of the matter. Subsequently, companies have shown no interest in following up these strange anomalies. Still more surprisingly, the manufacturer whom I questioned did not even mention different tax regimes or higher shipping costs of the material to the companies as reasons for these price differences, which could be one of the simplest explanations.

NIPT may have some advantages. The most obvious is that one can get an insight into the genetic health of the foetus at a very early stage without using an invasive procedure. Even though nowadays invasive testing carries very few risks to the foetus, NIPT is still sold as a safer alternative. It is, however, quite limited in its usefulness. Normally, NIPT is only used to exclude trisomies 13, 18 and 21, and to check for the gender of the unborn child. A limited number of other genetic abnormalities may also be covered, but the highest accuracy is promised only for trisomy 21.

And how reliable is NIPT overall? It is said to be based on free foetal DNA, whereas, in fact, the free placental DNA is tested. This means that, due to biologically possible genetic differences of placenta and foetus, in at least two percent of cases the NIPT result, being only valid for the placenta, is different from the result of the real foetal genome. And, because of other methodological problems, up to eight percent of tests may not produce any result on the first attempt.

In short, NIPT is limited and only methodologically as dependable as an invasive placental biopsy, and much more expensive in many countries than the simplest alternative, the first trimester screening, which involves a risk calculation based on sonography, age of the mother and 2 biochemical values determined form peripheral maternal blood. Nonetheless, NIPT is already (e.g. in Belgium and Switzerland) or close to being included as a standard procedure in the health insurances of some European countries, like Germany.

Why, then, are companies asking patients to pay such a high price in countries where they are least likely to be able to afford to? Word from within the local medical communities provides a possible answer: it is, apparently, an open secret in the countries with higher NIPT fees, that doctors get a ‘bounty’ for each patient whom they send for NIPT. If this is true, patients would not only pay for the test, but also a kickback to their doctor, of which they would be unaware.

This would be clearly contrary to the international code of ethics of the World Medical Association. Overall, this could be a topic to be urgently verified and possibly followed up by national medical associations in all countries affected by disproportionally high NIPT costs.

Differences of opinion about the usefulness of NIPT are fine, and to be expected; however, it would be clearly quite wrong if worried patients would be encouraged to undertake a test that is less reliable, more expensive and, in addition, provides a backhander to the person recommending it.