Non-invasive whole-body imaging of fibrosis: is it feasible?

Fibrosis is a chronic, life-shortening disease that can occur either as a consequence of genetic defects or in response to inflammation or damage. Such body systems as respiratory, gastrointestinal, musculoskeletal, genitourinary, and reproductive can be affected. Fibrosis disturbs functionality of vital organs such as liver and gallbladder, lung, pancreas, heart, intestines, reproductive organs and kidneys. It is involved in many chronic diseases and inflammatory injuries. Fibrosis is manifested in the excessive production of extracellular matrix macromolecules such as collagen I and III resulting in the loss of the tissue elasticity and accumulation of dysfunctional fibrotic tissue. The consequences can be lethal and it is crucial to diagnose the disorder on early stage of its development as well as to predict the disease progression and response to treatment.

The currently available invasive diagnostic method such as biopsy is potentially harmful and experience sampling errors, and can be used only on the late stage of the fibrotic process. Moreover, multiple biopsies for the determination of disease progression and treatment response monitoring are rarely possible in clinical practice. Non-invasive anatomical imaging techniques such as various ultrasound technologies, magnetic resonance imaging (MRI) and computed tomography (CT) are also available, however they are not specific and sufficiently sensitive. Moreover the ultrasound technique based diagnosis is to some extent subjective with inter-operator variability. Thus there is an unmet need for methods providing early, specific, sensitive, and non-invasive diagnosis.

Molecular imaging technique such as positron emission tomography (PET) provides the distinct advantage of the non-invasive diagnosis on molecular level with high specificity and sensitivity revealing the biological processes underlying diseases. A single examination using PET results in whole body scan with accurate and specific localization of the lesions, real time evaluation of physiology and pathology, and accurate quantification. However, such technique requires development of imaging agents that would specifically target and accumulate in the diseased tissues. The radionuclide of choice is positron emitting 68Ga (t1/2= 68 min, 89% β+) which has favorable physical characteristics and is readily available from a simple generator system. The labeling chemistry is amenable both to manual radiopharmacy practice and automated manufacturing which would make respective imaging agent available and affordable at any distant clinical centre providing worldwide accessibility. This will open the horizon for the personalized patient management in many chronic diseases. 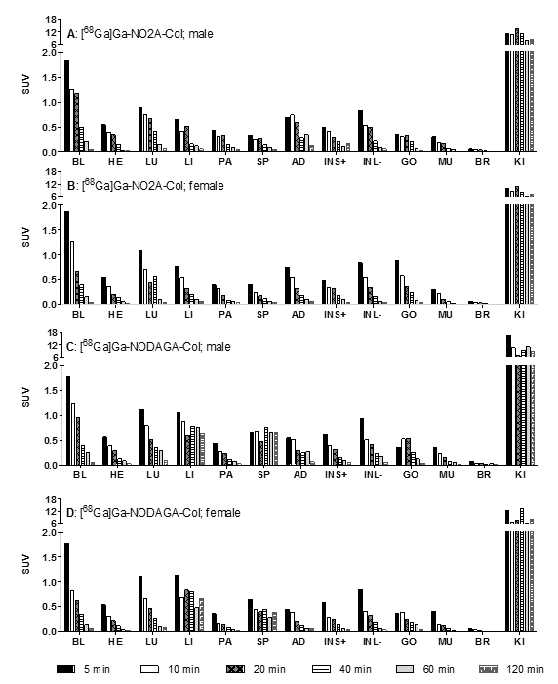 The imaging agent under development is based on a cyclic peptide designated as collagelin which demonstrated micromolar affinity to collagen I and III presumably binding to the triple helix structure of the latter thus providing potential for highly specific imaging. Two collagelin analogues comprising different derivatives of 1,4,7-triazacyclononane-N,N′,N″-triacetic acid (NOTA), [68Ga]Ga-NO2A-Col and [68Ga]Ga-NODAGA-Col demonstrated fast clearance from blood and normal tissue after intravenous administration to healthy rats, and the binding specificity was confirmed in vitro in cryosections of dog left ventricle myocardium with histologically confirmed fibrosis. The results are encouraging, however the adequate disease monitoring in clinical setup would require multiple repetitive examinations per year and longitudinal studies. Thus it was of paramount importance to conduct dosimetry study and estimate the absorbed doses and total effective doses, and thus potential maximum number of examinations per year. The imaging agent biodistribution was studied in male and female rats as a function of time and the data was used for the extrapolation and calculation of radiation dosimetry in humans.

The estimated whole body effective dose was the limiting parameter corresponding to the maximum total amount of radioactivity of 617 (female)/641 (male) MBq and 610 (female)/709 (male) MBq, respectively for [68Ga]Ga-NO2A-Col and [68Ga]Ga-NODAGA-Col that could be administered to a subject before reaching the limit for healthy volunteers of 10 mSv, and thus allowing up to six examinations per year. However, 2-fold lower absorbed dose for [68Ga]Ga-NO2A-Col in liver and spleen makes this tracer more attractive.

Thus up to six examinations per year in humans would be possible without exceeding the radiation limits in critical organs. It might be sufficient for the adequate disease monitoring in longitudinal studies and routine clinical setup. In addition, currently is there lack of approved drugs and therapies available, and PET with specifically targeted agents for molecular imaging that reveals the disease underlying biology on molecular level could considerably contribute to the drug discovery.