Chronic inflammation plays a crucial role in the development of cancer in general and of cigarette smoke (CS) – related lung cancer in particular. Accordingly, anti-inflammatory drugs, among which the extensively used nonsteroidal anti – inflammatory drugs (NSAIDs), provide an important tool exploitable for cancer prevention. Within the broad family of NSAIDs, aspirin is the prototype that has found an extremely widespread clinical use. Both experimental studies and epidemiological investigations support the view that aspirin users may have a decreased risk of getting cancer. Such a conclusion mainly applies to colon cancer, but recent literature analyses suggest that aspirin may attenuate other cancers as well, among which lung cancer, the most important cancer worldwide. However, epidemiological investigations cannot disentangle either the mechanisms involved or variations in susceptibility among population subsets, such as intergender differences. 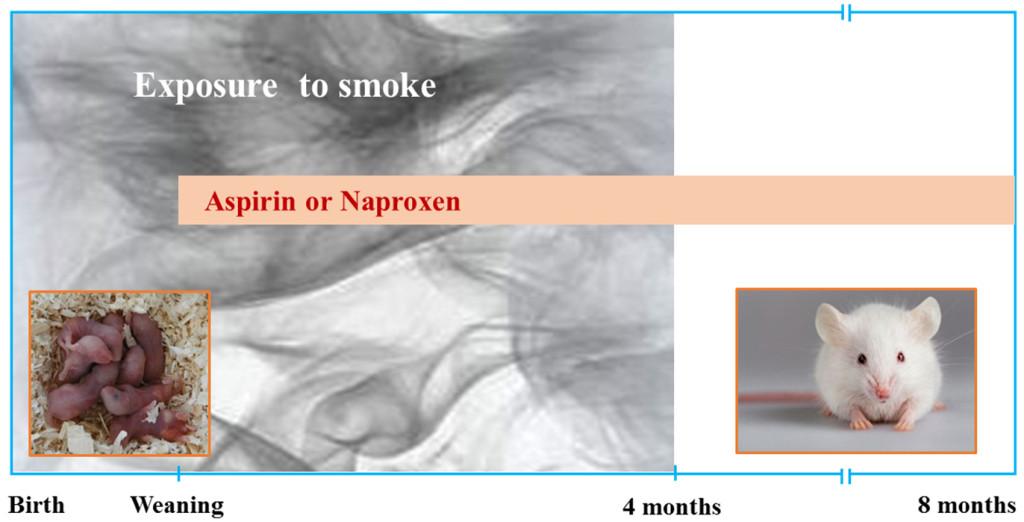 Another problem in this kind of studies is that, in spite of the overwhelming importance ascribed to CS, which accounts for approximately 85% of lung cancer cases, it is extremely difficult to reproduce the carcinogenicity of CS as a complex mixture in experimental animals. This drawback hampers the assessment of mechanistic issues and the evaluation of lung cancer modulation by dietary and pharmacological agents. In recent years, we developed a mouse model in which CS, and in particular the mainstream CS inhaled by active smokers, becomes convincingly carcinogenic. As shown in Fig. 1, our model involves the whole-body exposure of mice to mainstream CS during the first 4 months of life, followed by 3-4 months in filtered air. At that time, a variety of histopathological lesions can be detected in the respiratory tract and other organs, also including preneoplastic lesions, benign tumors, and malignant tumors in the lung. The oral administration of putative protective agents throughout duration of the experiment, starting after weaning, mimics a pharmacological intervention in current smokers. 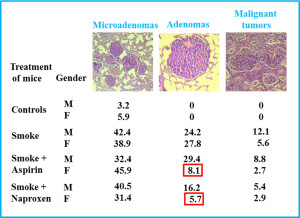 Fig. 2. Percent of mice bearing either preneoplastic lesions (microadenomas) or benign tumors (adenomas) or malignant tumors in the lung as related to treatment. Values in red squares refer to significant decreases of tumor incidence compared to mice of the same gender exposed to smoke in the absence of NSAIDs.

We used a total of 277 Swiss mice (strain H) of both genders, which were divided in 4 experimental groups. As shown in Fig. 2, the untreated mice (controls) had a modest incidence of lung microadenomas and none of them was affected by lung tumors, either benign (adenomas) or malignant. Irrespective of gender, exposure of mice to smoke resulted in a high yield of microadenomas and in the formation of both adenomas and malignant tumors of various histopathological nature. The oral administration of NSAIDs, whose dose was selected in a preliminary 6-week toxicity study and did not cause significant stomach bleeding, failed to affect the incidence of microadenomas. However, it significantly inhibited the formation of adenomas, a protective effect that was selective in female mice, with a 3.4- fold attenuation in aspirin-treated females and a 4.9-fold attenuation in naproxen-treated females. The incidence of malignant tumors was also attenuated 2.1-fold in aspirin-treated females and 1.9-fold in naproxen-treated females, but these differences did not reach the statistical significance threshold. It is noteworthy that before appearance of histopathological lesions, at 4 months of life, smoke caused a systemic DNA damage in mice of both genders, which was significantly inhibited by naproxen in female mice.

Interestingly, similar indications emerged in an independent study in which strain A/J mice were exposed to environmental CS, i.e., the smoke that is inhaled by passive smokers (S. La Maestra et al., Carcinogenesis 2015 Oct 13.). Altogether, these results lend support to the hypothesis that (a) estrogens are involved in smoke-related pulmonary carcinogenesis and (b) NSAIDs may have protective effects towards estrogen-linked tumors, probably by affecting the hormone metabolism. They suggest that female smokers using NSAIDs may have a decreased risk of developing lung tumors, an effect that cannot be detected in humans due to the low power of epidemiological studies.