Type 2 diabetes mellitus (T2D) is a major health burden in developing and industrialized countries (www.idf.org). Common genetic variations, susceptibility genes, epigenetic regulation, and miRNAs have been suggested to be profoundly involved in the pathogenicity of T2D.  Several bioinformatics tools such as the residual variance intolerance score “RVIS” or EvoTol have been developed to predict candidate disease-causing genes without prior genetic knowledge of the disease. Recently, a score method called loss-of-function tool (LoFtool) has been developed to prioritize genes that are most intolerant to functional variation by providing a score of gene intolerance and susceptibility to disease based on the ratio of Loss-of-function to synonymous mutations for each gene. The LoFtool percentile for each coding gene is determined by the possibility of a gene having a mutation that causes loss of normal function. Thereby, genes with lower LoFtool percentiles are more intolerant to functional variation. 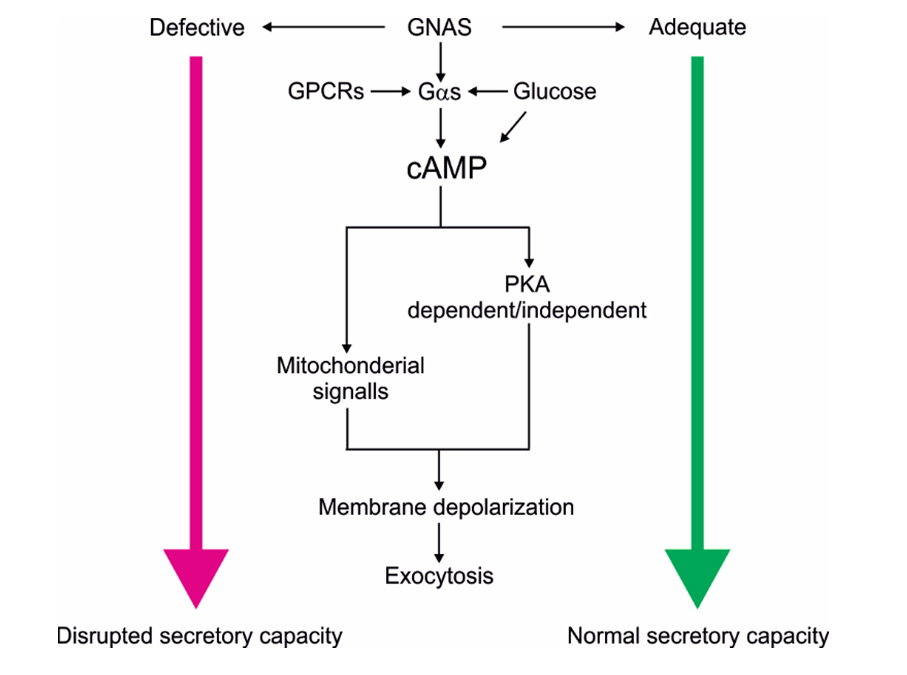 Fig. 1. GNAS encodes the heterotrimeric Gs protein alpha-subunit (Gsα) that couples to adenylyl cyclase and thus is required for receptor-mediated stimulation of cellular cAMP generation, which in turn activates serine/threonine kinase protein A (PKA). Adequate status of GNAS in pancreatic β-cell, increased intracellular cAMP and subsequent activation of PKA play an important role in insulin secretion by increasing the influx of Ca2+ to potentiate exocytosis. In a defective status, GNAS affects mitochondrial-generated signals alongside the impairment of membrane-depolarizing capability which resulted in reduced glucose-stimulated insulin secretion. (image created by Dr. Albert Salehi).

We applied the LoFtool to the expressed genes in the human pancreatic islets as measured by RNA sequencing. The 1st quartile of most intolerant LoFtool genes was crossed-referenced with the 100th most expressed genes in human islets. A list of 14 genes matched these criteria i.e. INS, TTR, EEF1A1, PRSS1, FTH1, SERPINA3, GNAS, ACTG1, HSPA8, PSAP, ACTB, CALR, CALM2, and APP.  Based on their high expression in sorted pancreatic β-cells compared to α-cells or exocrine cells, GNAS and EEF1A1 were prioritized for functional validation in INS-1 (832/13) cells and human islets. Silencing of GNAS by siRNA in INS-1 cells impaired insulin secretion, insulin content, cAMP production as well as the expression of β-cell function genes Insulin, PDX1, and MAFA. Cell viability and apoptosis rate were unaffected in GNAS-silenced cells. No effect of EEF1A1 silencing on insulin secretion was observed. Both GNAS and EEF1A1 showed a comparatively high expression level in human islets than fat, liver, and muscle tissues. Differential expression analysis revealed a reduced expression of GNAS, but not of EEF1A, in diabetic islets compared to non-diabetics. More, GNAS expression was correlated positively with insulin secretory index, GLP1R, GIPR, and inversely correlated with HbA1c.

In summary, we introduced a novel approach to identify novel genes for the β-cell function by combining bioinformatics with functional validation. The LoFtool is a great tool to narrow down genes with a potential role in pancreatic β-cell dysfunction for future studies to explore their role in β-cell function. GNAS is identified as a crucial gene involved in insulin secretory capacity that might involve in the pathophysiology of T2D.