Obesity fuels breast carcinogenesis: What is the molecular basis?

Excess body weight is associated with the primary risk of 13 distinct cancers and is generally considered a poor prognostic indicator for patients diagnosed with a variety of malignancies. Obesity is increasingly recognized as a risk factor for breast cancer development. Growing evidence suggests that breast cancers that occur in obese women are more aggressive and less responsive to various treatments, and that women who are overweight or obese at the time of diagnosis are at higher risk of cancer recurrence and death compared with leaner women. There are also some indications that gain of weight after breast cancer diagnosis may also lead to poor outcomes. Several hypotheses and theories have been proposed, however, the molecular basis obesity-related breast carcinogenesis remains elusive. 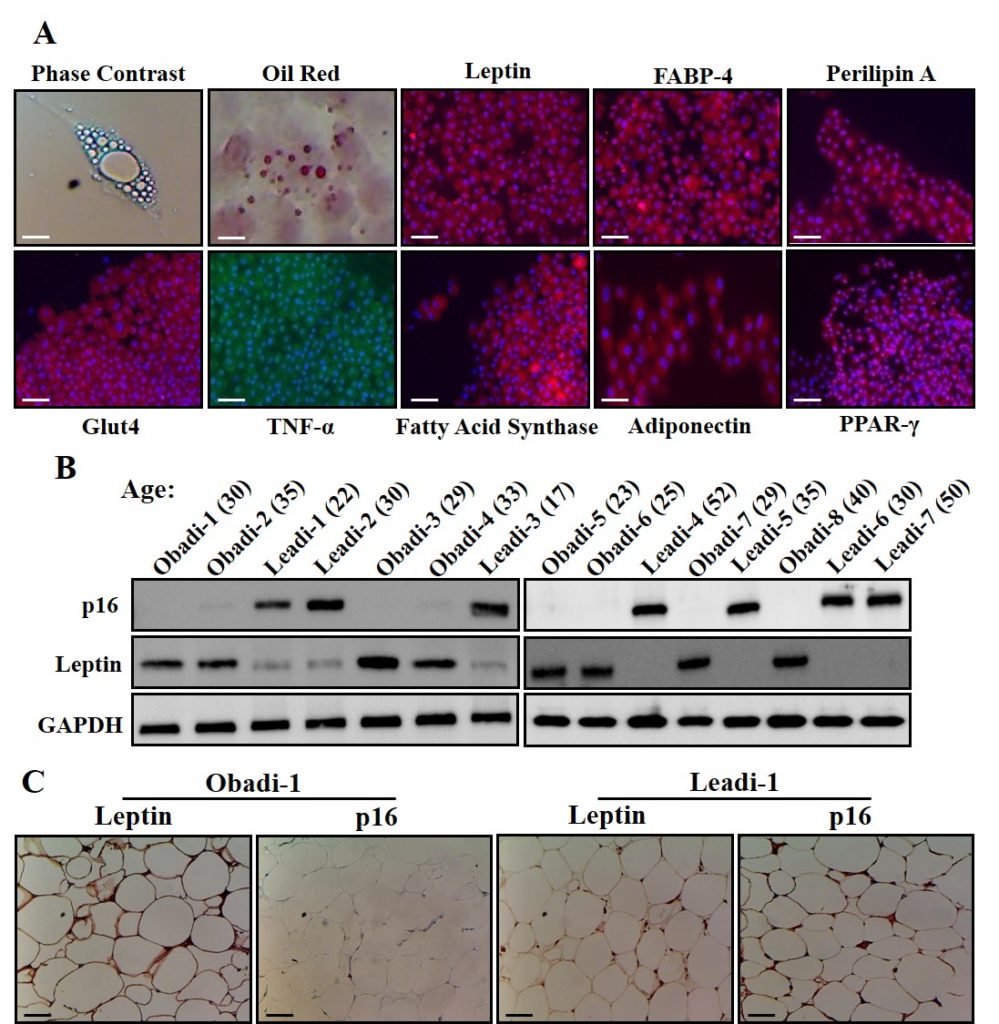 This study began with the collection of samples of fatty breast tissues from obese women (BMI ≥30) and others with normal weights (BMI <30) who underwent plastic breast reduction. The fatty cells (adipocytes) were then utilized for cellular and molecular analysis. We have shown a remarkable link between obesity and the molecular as well as the cellular features of these cells. Indeed, breast adipocytes extracted from obese women expressed low level of the tumor suppressor p16INK4A protein compared to mature adipocytes from lean women (Fig. 1B), they were more proliferative, migratory, invasive and pro-carcinogenic as compared to those developed from lean women.

Additionally, using state of the art techniques, we have shown that p16INK4A represses the expression/secretion of the obesity-related procarcinogenic leptin at the mRNA level through miR-141 and miR-146b-5p, which bind the leptin mRNA at a specific sequence in the 3’ untranslated region (UTR). These results show that obesity activates breast stromal adipocytes through p16 downregulation, which upregulates leptin and promotes procarcinogenic processes.

To shed more light on the potential of obesity in promoting breast carcinogenesis, the team underwent in situ experiments, which provided the first indication that breast tissues from obese females contain epithelial cells with features of breast cancer cells (Fig. 2). This confirmed the susceptibility of these cells, which can be transformed into cancer, to the effects of their microenvironment and their predisposition for randomized obesity-related neoplastic transformation. Furthermore, the tumorigenicity of active adipocytes from obese women was further confirmed by evidence of their ability to enhance stemness both in vitro and in vivo. These cells promoted mammary stem cell features (expressing high levels of CD44 and low levels of CD24 [CD44high/CD24low] and ALDHhigh) in primary mammary luminal cells and in breast cancer cells in orthotopic tumor xenografts.

Together, these results indicate that breast adipocytes from obese females are active procarcinogenic cells, which express very low levels of the tumor suppressor protein p16, a negative regulator of leptin through miR-141 and miR-146b-5p. Therefore, the expression level of p16 and/or miR-141/miR-146b-5p in breast adipocytes could be utilized as a molecular biomarker for obesity and obesity-related procarcinogenic effects in the breast. In addition, these findings shed more light on the relationship between obesity and breast cancer and indicate the risk of excessive weight gain, and will pave the way toward understanding the cellular and molecular basis of the link between obesity and other types of cancers, which will have a great impact on the awareness and prevention programs.