There is growing global concern over the plastics pollution of our oceans and the many unanswered questions about its sources, sinks, pathways and impacts. Remote sensing (RS), the science of obtaining information about objects or areas from a distance using sensors mounted on platforms, ships, airplanes and satellites, has the potential to provide long-term, global monitoring but for marine plastics it is still early stages. We investigated how natural daylight interacts with common plastic litter items floating on top of the water surface. 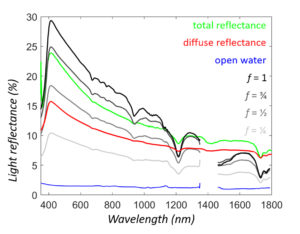 RS of marine plastic litter using the reflectance of sunlight has been done before, with airborne cameras imaging the plastic in the visible and optical infrared light spectrum and using plastic specific light absorption bands (range of wavelengths where light is absorbed) in the interpretation of the images. However, a theoretical light reflectance model describing transmittance and reflectance of light hitting a plastic littered water surface has been missing. We developed and tested such a model based on geometrical optics (light as rays) and the spectral signatures of plastic and seawater.

First we identified all light rays contributing to upwelling light captured by a sensor in air. These included, light reflected directly upwards at the air-water and air-plastic interfaces, and subsurface upwelling light transmitted upwards through the water-air and plastic-air interfaces. The resulting model predicted how RS reflectance changes with varying surface fractions of plastic of different transparency and reflectivity. We then tested the model using a few common plastic litter items of different volume, shape, composition, transparency, and surface roughness.

Spectral light (‘detailed colour’) measurements in the laboratory of optical properties of the plastics supported measurements in the field (Fig. 1). We were able to obtain a proof of concept of our model and confirm how different types of plastic litter display different light reflectance properties. Expanded polystyrene, such as found in insulation foam boards and food containers, was highly reflective while clear, transparent soft drink bottles much less so (Fig. 2). 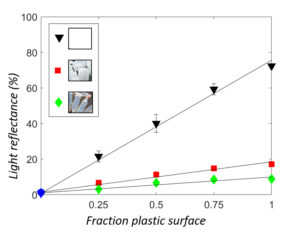 Traditional light reflectance models for ocean colour RS that have been very successful in predicting concentration Chlorophyll (Chl) do not work for floating plastic. First, Chl is present in phytoplankton suspended in the water column, whereas floating plastic is ‘sandwiched’ between water below and air above.  Second, the Chl absorption bands are in the visible spectrum (visible light can penetrate water to hundreds of meters depth) while those for plastic are in the infrared end of the spectrum where water quickly absorbs light. We therefore believe that detection of so called ‘microplastics’ (< 5 mm) suspended in the water at depth is not possible and focussed on larger plastics in the development of our optical model and experiments.

Our optical model can help explain RS observations and advance RS algorithms for the monitoring of surface marine plastic litter. It can be used in single, dual and additional band RS algorithms in the visible to optical infrared light spectrum. Applying the anticipated observations of marine plastic are much needed in particle tracking models that estimate global distributions of marine plastic pollution. Marine plastic pollution has not yet been observed from satellites, not even in the so called “garbage patches” in the Atlantic and Pacific gyres, but in theory our model could be applied to existing sensors on satellites currently in orbit.