Oil spills can be catastrophic: which European coastal regions are most at risk?

From Portuguese shores to North Sea coasts European Atlantic regions are at high risk of being affected by oil and other marine spills, with United Kingdom most affected, according to recent research analysing the potential impact of spills at sea on coastal regions (Fernández-Macho, 2016). The study proposes a marine spill risk index to measure and compare the vulnerability of coastal regions to this type of pollution. 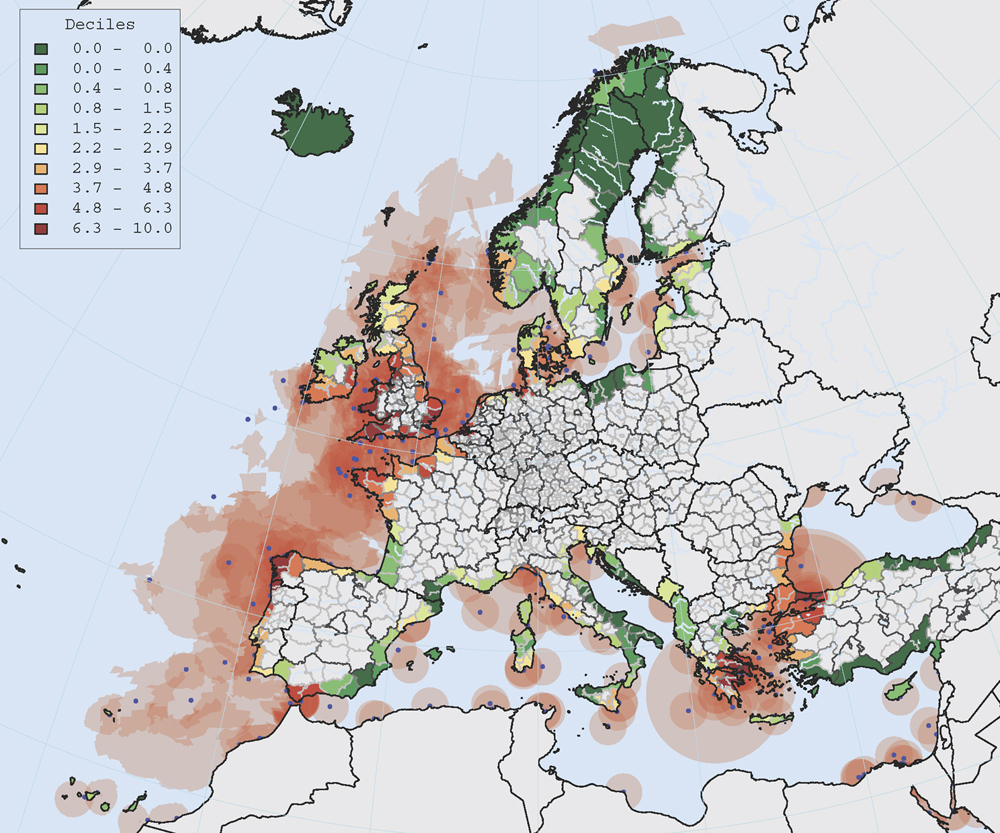 Oil and other sea pollution can be very damaging to the environment, seriously harming marine and coastal wildlife, and have serious consequences for many socio-economic aspects in coastal areas, possibly causing fishing and other economic activities to close. As a result, marine spills attract intense media attention and generate strong political debate about the appropriate actions to prevent them from happening and counteract their environmental and socio-economic impacts. At the same time, there has been an increasing interest in the analysis of ocean resources for human development and sustainable economic growth. For example, successive European Union marine policies identify marine activities as crucial drivers for the economy, yet compatible with the concern for the protection and sustainable management of the ocean.

In response to this, a substantial body of international policy improvements, government regulations and voluntary initiatives from private firms for preventing marine spills have emerged over the last decades with varying results. Nonetheless, large spills keep occurring with an impact distribution among coastal areas that is far from homogeneous. The design of these marine policies, regulations and initiatives needs some sort of monitoring of coastal vulnerability. The proposed marine spill risk index uses tools of geographic information systems and computer modelling to simulate the effect of spills at sea. The modelling considers the size of the spill, its distance from the coast, the shape and length of coast that would be affected and the direction and speed of the ocean currents. It has been applied to all recorded historical spills in European waters from 1970 to 2014 for 429 Eurostat territorial units in 156 European coastal regions. Figure 1 illustrates the relative risk that coastal territories in European coastlines may face from marine spills.

The results show a high heterogeneity between European coastal regions with areas, predominantly on the Atlantic coast, with high risks from marine spills. In particular, the index revealed that the west coast of UK was at highest risk of being affected by marine spills. Thus, of the top 20 regions, 9 were along the UK coast with West Wales with the highest score. Of the remaining regions, there were two each in Germany, Netherlands and Greece and one each in Ireland, Portugal, Spain, France and Italy.

At the country level, countries on the Atlantic European coast including the UK, Germany, Netherlands, France, Spain and Portugal, in that order, had the highest risk scores. In contrast, countries located around the Baltic and Mediterranean seas, with the exception of Greece that also was among those at high risk, had comparatively lower risks from oil spills. Iceland, despite its Atlantic location, had the lowest risk of all the countries due to major international shipping routes being far away to its shores.

All of this could help policymakers design policies to protect our coastal areas, develop maritime transport regulations and reduce the vulnerability of sensitive resources by identifying the most vulnerable regions and focusing on protection measures against future spills in those areas.