The hormone insulin was discovered in 1921 by Banting and Best, and since that time it has been studied rigorously. At the same time first attempts were made to use insulin for treating diabetes. Insulin was the first protein the amino acid sequence of which was decoded. After determination of the amino acid sequence of A- (21 a.a. residues) and B-chains (30 a.a. residues) in 1951-52 Sanger demonstrated that proteins have a definite chemical composition. Hodgkin studied insulin from 1934 through 1969 by the method of X-ray diffraction. Her studies were crowned with success, and in 1969 it was shown that the insulin crystal lattice contains samples with molecular weight of 36 kD and that insulin exists as a Zn-containing hexamer. Simultaneously the membrane-binding insulin receptor was found. All together these discoveries were of extraordinary importance for the strategy of treating and prevention of diabetes. 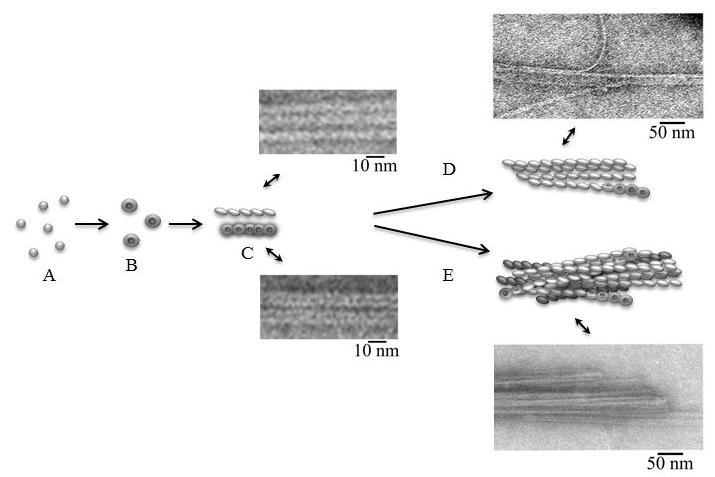 However, at the very beginning the researchers faced the problem of insulin fibrillation that is detrimental upon isolation of insulin and the storage and transportation of insulin preparations. In 1940 Waugh described insulin fibrils for the first time and determined conditions for formation of fibrils. They included low pH, increased temperature, organic solvents, and agitation. When regions responsible for the formation of dimers were determined and insulin analogs with mutations in these regions were obtained, monomeric insulin analogs were prepared that could rapidly get into the bloodstream and develop enzymatic activity faster, which was of significance for therapeutic purposes. An example of such fast analog of insulin is LisPro (inversion of two residues LysB28(Pro) and ProB29(Lys)) forming no dimers.

To determine the mechanism of the fibrillation process, we studied insulin and its fast analog LisPro. This protein is easily self-organized in fibrils at acidic pH and is frequently used as a model of amyloidogenic protein. To start the fibrillation process it is necessary to achieve partial destabilization of an amyloid protein molecule (Fig. 1 A). Then the formation of fibrils proceeds according to the simplified scheme: destabilized monomers (A) → oligomers (B) → mature fibrils (C). Electron microscopy (EM) data for insulin, the same as for other amyloid proteins/peptides, show that polymorphism is observed upon formation of fibrils. In addition to mature single fibrils, EM images display fibril associations in form of ribbons (D) and bundles (E), and at later stages these polymorphic structures associate forming large fibril clusters. Under high magnification it is possible to visualize a thin fibril structure. It is notable that two types of single fibrils are seen: with the diameters of 3-4 nm and 6-7 nm (Fig. 1 Scheme C). This circumstance forced researchers to think about the internal organization of the two types of fibrils. We can see that fibrils of 6-7 nm in diameter consist of ring structures (ring-like oligomers, see Fig. 1 Scheme B). Such ring-like oligomers interact with each other either in a ring-to-ring manner or the rings slightly overlap each other upon interaction. The diameter of the internal ring (hole) in such oligomers is about 2-3 nm. If such oligomer is adsorbed on the film by its side surface, the third dimension of a ring-like oligomer is obtained, namely its height of about 3-4 nm. This is the diameter of thinner single fibrils where the stacking of ring-like oligomers reminds dominoes or a ladder. Insulin has a characteristic lateral association of fibrils when fibrils in ribbons and bundles tend to associate with each other by their faces. In this case we can see fibrils of 3-4 nm in diameter which corresponds to the height of a ring-like oligomer (Fig. 1 Schemes D and E).

It has been noted that the formation of fibrils proceeds by a simplified scheme: a monomer → a destabilized monomer → an oligomer (frequently of ring-like morphology) → a polymer in the form of elongated fibrils of different morphologies. Usually the most arguable moment in the proposed models of amyloid formation is the problem of transition from the oligomer to the fibril. Our studies of a number of amyloidogenic proteins and peptides (insulin, Aβ-peptides and protein Bgl2 from the yeast cell wall) as well as of their amyloidogenic fragments have made it possible to propose our model of formation of fibril structure as one of the possible mechanism of amyloid formation. We have found that the main structural element (block) of a fibril of any morphology is a ring-like oligomer. For the studied proteins/peptides, different interactions of ring-like oligomers with each other allow us to explain their polymorphism and fragmentation of fibrils.