Omega-3 fatty acids, abundantly present in fish oil products, are in large use among the public because of the widespread perception that they are able to ameliorate and even prevent many chronic diseases, including cancer. Our research team has been interested in investigating the possible antitumor effect of omega-3 fatty acids against breast cancer. The data already available in the literature, although overall supportive of a protective effect against breast cancer development, are still not definitive due to inconsistencies of results among different studies. We believe that this may be due in part to the fact that only certain subgroups of women may preferentially benefit from omega-3 fatty acids. Therefore, the degree to which these subgroups are represented in the various studies could certainly contribute to the variability of the results. In our clinical trial, conducted in healthy postmenopausal women at increased risk of breast cancer because of high breast density, we tested the hypothesis that body mass index (BMI), an indicator of the degree of obesity, may have a major influence on the protective effect of omega-3 fatty acids. In our study, women were given 4 gm daily of Lovaza (the FDA-approved formulation of omega-3 fatty acids containing a combination of EPA and DHA) alone or in combination with the antiestrogen Raloxifene for two years. A control group received no treatment. The change in breast density, a validated biomarker of breast cancer risk, was the primary endpoint of the study. 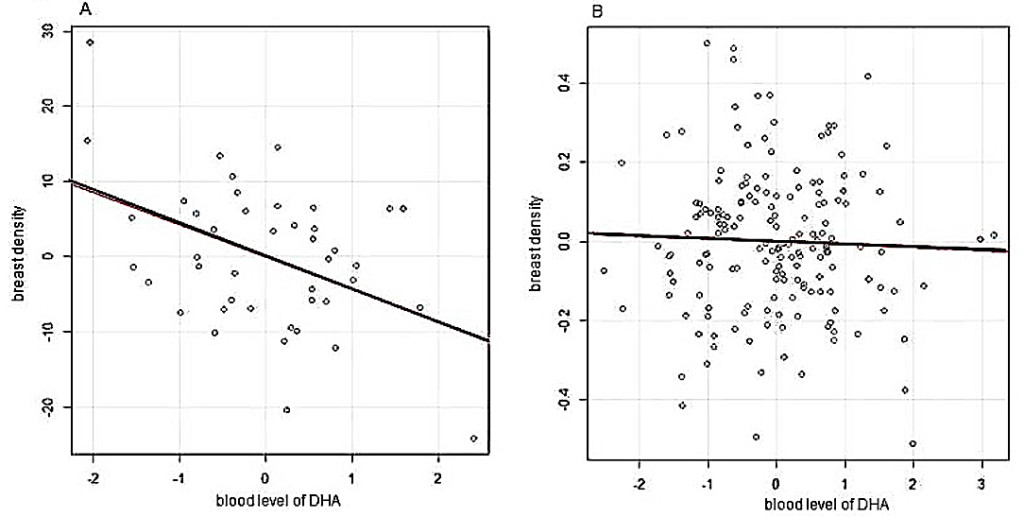 These data strongly suggest that obese women may preferentially benefit from the protective effect of omega-3 fatty acid and that future studies should target this subgroup, using DHA as the agent of choice. EPA levels in our study did not inversely correlate with breast density even in obese subjects.