Circular RNAs (circRNAs) are a class of endogenous non-coding RNAs that have recently shown to behave as gene regulators in eukaryotic cells, extending our previous knowledge regarding the diversity and complexity of the transcriptome. Nowadays, circRNAs have become an important research subject, attracting interest from different areas including the field of cancer research. CircRNAs can regulate alternative splicing, sequester RNA-binding proteins and ribonucleoprotein complexes. They can be translated and bind in trans to other RNA sequences. CircRNAs can also act as microRNA (miRNA) sponge, binding the miRNAs and consequently repressing their function. The miRNA sponge activity seems to be one of the most favourite mechanisms in cancer.

In our work, we explored the role of circPVT1 in the oncogenic context of Head and Neck Squamous Cell Carcinoma (HNSCC). HNSCC is the sixth leading cancer by incidence worldwide and the eighth most common cause of cancer death.

We started with a bioinformatics-based approach using the HNSCC cancer data set provided by The Cancer Genome Atlas (TCGA). We found that circPVT1 was up-regulated in tumors with TP53 mutations compared to non-tumoral samples. TP53 gene missense mutations produce full-length mutant p53 proteins, which are abundantly present in cancer cells, and frequently gain oncogenic activities. We recently showed that mutant p53 protein is able to interact with the transcriptional co-factor YAP (Yes-Associated Protein) that in turn enhances the expression of the pro-proliferative genes regulated by mutant-p53. We found circPVT1 up-regulated in tumors carrying mut-p53 proteins in comparison to non-tumoral samples also using a molecular approach where we determined the circPVT1 expression by real time PCR using our home collection of HNSCC samples (Fig. 1). Notably, we found that high circPVT1 levels associated with poorer overall survival of HNSCC patients.

Mechanistically, we document a molecular scenario in which the circPVT1 expression is transcriptionally enhanced by the mut-p53/YAP/TEAD complex and by circPVT1 itself through YAP binding (Fig. 2). YAP acts as an effector of the Hippo pathway in cancer and its biological function is mainly mediated by the TEAD transcription factors. We founds that circPVT1 behaved like an oncogene modulating the expression of the tumor suppressor miR-497-5p, a microRNA associated with mutant p53, and the expression of genes involved in cell proliferation such as aurka, mki67 and bub1. 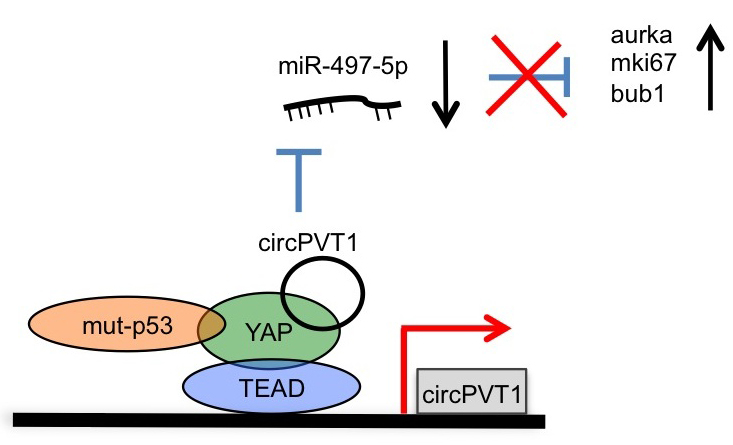 Based on their high stability, high abundance in body fluids and high conservation among the species, circRNAs are promising biomarkers and potential therapeutic targets. Our study describes the oncogenic function of circPVT1 and it might hold the potential to design new diagnostic and therapeutic strategies in HNSCC.