With the development of next generation semiconductor photoelectric devices towards miniaturization, high performance and high integration, traditional bulk materials are facing enormous challenges. The discovery of graphene has opened the door to the research and application in new world of 2D materials. Beyond graphene, transition metal dichalcogenides (TMDs) have attracted much attention owing to their suitable bandgaps, high carrier mobility, strong light-matter interactions. The dangling-bond-free surface and weak interlayer interactions make it possible to build van der Waals (vdW) heterostructures using arbitrary combinations of 2D materials. VdW heterostructures based on TMDs have shown great application potential in the fields of electronics, photoelectrics and energy, etc. However, the high resistance, low visible light sensitivity and strong interlayer recombination of intrinsic TMDs vdW heterostructure can result in a low power conversion efficiency (PCE) . Especially, the high carrier recombination at the interface is the major obstacles in photovoltaic applications.

Fig. 1. (a) J-V characteristics of MoS2/WSe2 with and without h-BN inserted layer, (b) Schematic of band diagram of MoS2/h-BN/WSe2.

Remarkably, insert a suitable insulator at the interface to form a typical semiconductor-insulator-semiconductor (SIS) is an effective way to improve the PCE of vdW heterostructures. In these cases, the insulator can balance carrier injection, reduce leakage current and suppress interlayer recombination. Furthermore, the SIS heterostructures can offer significant benefits, such as tiny depletion zones and low dark current. Besides, the PCE in the SIS vdW heterostructures can be further improved as the thickness of intercalated insulator increases. However, when the insulator thickness is greater than the critical thickness, the insulating layer will block carrier separation and collection. Thus, an optimal thickness of the insulator layer is critical to the balance of carrier recombination and separation.

In this work, we developed a theoretical model between the thickness and the band offsets as well as the photoelectric properties of MoS2/h-BN/WSe2 heterostructures, and clarified the effect of intercalated h-BN on the carrier collection and recombination at the interface. We found that the photoelectric properties of MoS2/h-BN/WSe2 heterostructures have been significantly improved compared to that of MoS2/WSe2. In fact, there is a large interlayer recombination at the MoS2/WSe2 interface with type II band alignment. The inserted h-BN will reduce the interlayer recombination, whereas it has little effect on the carriers collection. On the one hand, the h-BN can weaken the optical absorption of TMDs and slightly increase the resistance of the entire system to reduce short-circuit current density. On the other hand, the interlayer recombination is suppressed owing to the high electron-barrier at the MoS2/h-BN interface (Fig. 1). 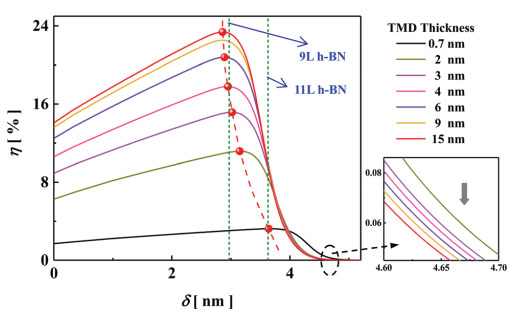 In addition, the PCE increases with increasing TMD thickness in the case of thin h-BN. The maximum PCE can improve from 14% to 23.37% at ~15 nm TMDs with inserted h-BN due to the suppression of interlayer recombination. Notably, the PCE is reduced in the case of 10-layer h-BN owing to the suppression of carrier collection.  The thick h-BN will block carrier separation and cluster photogenerated carriers at the interface, and the interlayer charge transfer will be significantly suppressed. Interestingly, the optimal thickness of h-BN decreases from 11 layers to 9 layers as the thickness of TMDs increases, and tends to be stable when the thickness of TMDs is greater than 9 nm (Fig. 2). Overall, the excellent performance of MoS2/h-BN/WSe2 vdW heterostructures demonstrate that the interface inserting insulators is an effective way to improve efficiency, provides a potential guidance in the future design of TMDs-based  photoelectric devices.