Orexin-A (orx-A) is a neuropeptide expressed exclusively in hypothalamic neurons. Orx-A acts through the activation of type-1 (Orx1R) and -2 (Orx2R) receptors present in the mesolimbic circuit and in other brain areas. These neuropeptides have been implicated in various psychiatric illnesses such as narcolepsy/cataplexy, stress, anxiety, depression, neurodegenerative diseases, and drug abuse.

Orexin system signaling modulates the mesolimbic dopaminergic pathway constituted by the ventral tegmental area (VTA) and the nucleus accumbens (NAc). The NAc is the projection area of dopaminergic neurons that reside in the VTA (Fig. 1A). The NAc is involved in mediating mood and motivation. This, in turn, is subdivided into core and shell. The shell receives most of the orexinergic terminals from the hypothalamus (Fig. 1B). 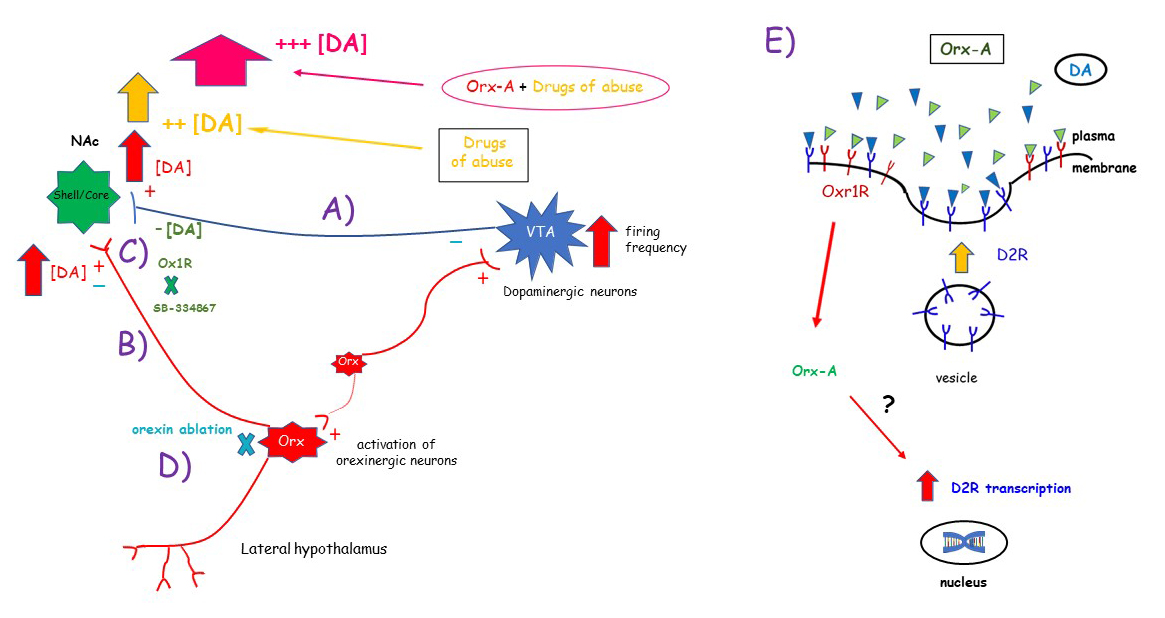 Fig. 1. A hypothetical cellular model for the action of orexin-A (orx-A) on gene transcription and dopamine receptor 2 (D2R) protein content in the nucleus accumbens (NAc), area of the brain involved in the regulation of motivation and reward. (A) mesolimbic dopaminergic pathway, (B) the shell receives most of the orexinergic terminals from the hypothalamus, (C) inhibition of orexin type-1 receptor (Orx1R) with SB-334867 decreases dopamine (DA) release, (D) orexin ablation reduces DA levels, (E) injection of orx-A into the shell induces an increase in both gene transcription and D2R protein levels.

On the other hand, it has been proposed that a dysfunction in dopamine (DA) signaling can be key in many neuropsychiatric diseases such as schizophrenia, bipolar disorder, depression, Parkinson’s disease, attention deficit hyperactivity disorder, and drug abuse among others.

Neurochemical studies indicate that the activation of orexin receptors could influence behaviors known to be regulated by DA. Since orx-A has been shown to stimulate DA release under basal conditions in NAc, an effect that is blocked by inhibition of Orx1R with SB-334867 (Fig. 1C). Furthermore, under basal conditions, orexin knockout mice displayed reductions in both evoked DA release and DA uptake rate, suggesting that orexins play an important role in DA transmission (Fig. 1D). Moreover, drug-of-abuse-induced DA release is enhanced by orx-A in both core and shell. Thus, orx-A may be a crucial mediator in addictive processes such as seeking behavior, restoration of self-administration, and relapse of drug use.

Therefore, we are interested in exploring whether the activation of the orexin system, through the administration intra-NAc/shell of orx-A may alter the density and expression of DA 2 receptors (D2R). Since changes in the expression levels of D2R in the mesolimbic circuit have been associated with the uncontrolled consumption of drugs of abuse and mood disorders.

Our results revealed for the first time that orx-A promote up-regulation of D2R, with no changes in DA 1 receptor (D1R).  These data show that orx-A can induce increases in both gene transcription and D2R protein levels in NAc (Fig. 1E). Suggesting that orx-A may affect the hedonic impact of a reinforcing stimulus. However, further research is needed to determine the signaling mechanisms that promoted these effects.

Orexin system may be a viable target for pharmacotherapy development to treat drug addiction and neuropsychiatric diseases.