Regulation of mediator’s expression and chemotaxis in mast cells

The increasing prevalence of inflammatory diseases worldwide underlines the importance to study the molecular mechanisms leading to these disorders. Recent genome-wide association studies based on large group of patients and healthy controls revealed candidate genes, which are involved in distinct diseases. One of them is ORMDL3. The ORMDL3 protein attracted increased attention since the discovery that the changes in ORMDL3 protein expression are associated with predisposition to inflammatory diseases such as asthma, primary biliary cirrhosis, type 1 diabetes and Crohn disease.

Human and mouse ORMDL3 genes encode small proteins belonging to the conserved ORMDL family consisting of three members, ORMDL1 – 3. Several studies attempted to explain the physiological role of ORMDL3 protein in cells and tissues relevant to asthma. In these studies, ORMDL3 was described predominantly as a positive regulator of inflammation. For example, transgenic mice overexpressing human ORMDL3 protein exhibited increased levels of serum immunoglobulin E (IgE) and showed spontaneous development of enhanced airway responsiveness and expression of proinflammatory mediators. This correlated with increased numbers of cells of the immune system in the lungs of the transgenic mice. 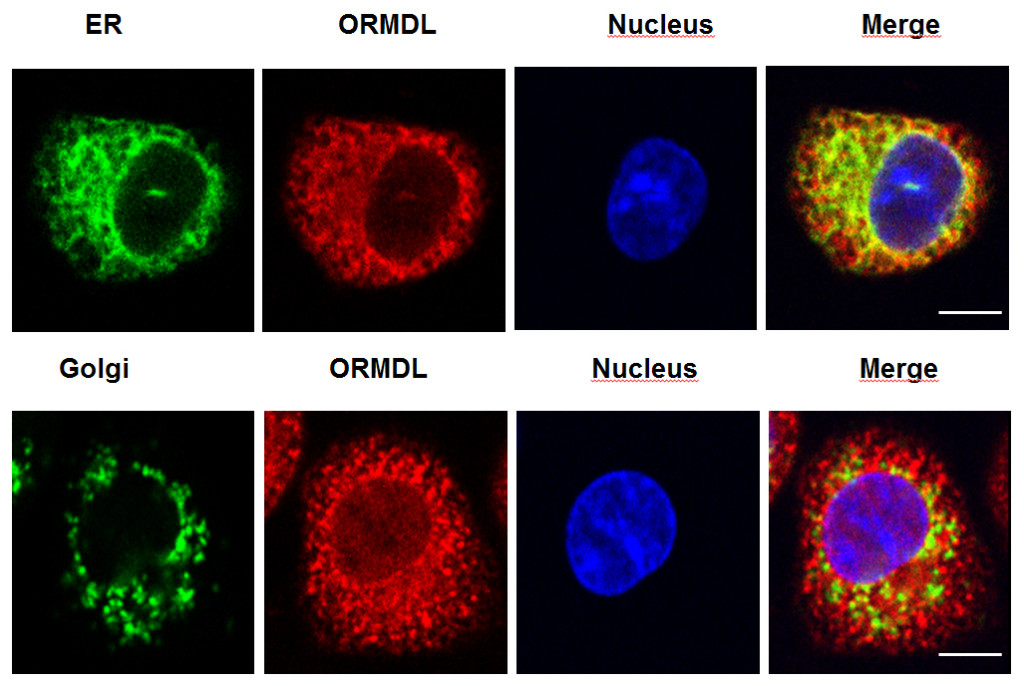 Fig. 1. Colocalization of endogenous ORMDL proteins (shown in red) with a marker of endoplasmic reticulum (ER, upper panel, in green) but not with a marker of another cell compartment, Golgi apparatus (lower panel; in green) in murine mast cells. Nuclei (shown in blue) and merged pictures are also shown; bars, 5 µm.

Although mast cells are crucial effectors in IgE-dependent allergic disorders and are critical for promoting severity of collagen-induced arthritis, which is an autoimmune inflammatory disease, the role of ORMDL3 protein in antigen-mediated mast cell activation has not been determined. At the beginning was our finding that mast cells express high levels of ORMDL family proteins (Fig.1).

Then we tested our hypothesis that changes in the expression levels of ORMDL3 protein could modulate mast cell proinflammatory responses. Although enhanced or reduced expression of ORMDL3 protein had no effect on antigen-induced degranulation and calcium responses, which are directly responsible for mast cells physiological functions as well as allergic disorders, several lines of evidence presented in our study, surprisingly, indicated that ORMDL3 protein is a negative regulator of proinflammatory mediators produced by antigen-activated mast cells. 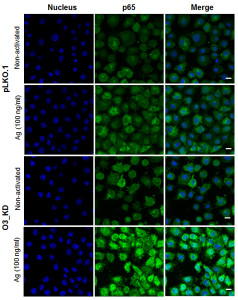 Increased production of such mediators (cytokines, chemokines, and COX-2, an inducible proinflammatory enzyme), in cells with decreased ORMDL3 protein levels could be explained by our finding that the AKT/IκBα protein signaling axis showed increased activation. IκBα is a regulator of the transcription factor NF-κB, a central protein complex regulating immune responses. Improperly regulated NF-κB protein complex causes a broad variety of inflammatory diseases. We showed that localization of a p65 subunit of the NF-κB complex was increased in the nuclei of antigen-activated mast cells with decreased expression levels of ORMDL3 protein (Fig. 2). It is known that enhanced nuclear localization of the NF-κB p65 subunit leads to increased transcription of genes encoding various inflammatory mediators and enzymes multiplying inflammatory processes. We also found that cells with reduced amount of ORMDL3 exhibited enhanced migration towards antigen. Negative regulatory role of ORMDL3 in chemotaxis was also supported by our finding of reduced chemotaxis in cells with enhanced ORMDL3 levels.

In conclusion, we have shown for the first time that decreased expression of ORMDL3 leads to enhanced inflammatory response in antigen-activated mast cells. Our findings differ from those previously described in other cell types, demonstrating predominantly positive regulatory roles of ORMDL3. Our data underline the complexity of inflammatory diseases and at least partially explain the findings that decreased as well as increased expression levels of ORMDL3 could contribute to development of inflammation.

Viktor Bugajev and Petr Draber
Department of Signal Transduction
Institute of Molecular Generics,
Academy of Sciences of the Czech Republic,