Osmosis is a phenomenon in which water moves always from higher to lower chemical potential, commonly towards the area with higher solute concentration. Living cells are semi-closed systems with membranes permeable for water but not for many solved particles and consequently the cells have to cope with changing water activities. Most of the physiological processes within cells are very sensitive towards such changes and since fungi are not able to escape unfavourable environments, they are reliant on sensitive mechanisms to detect, transform and regulate the response to these signals by modulation of their cellular physiology. For this purpose, signaling pathways play a crucial role and one example is the high osmolarity glycerol (HOG) signaling pathway responsible for osmoregulation of fungi. 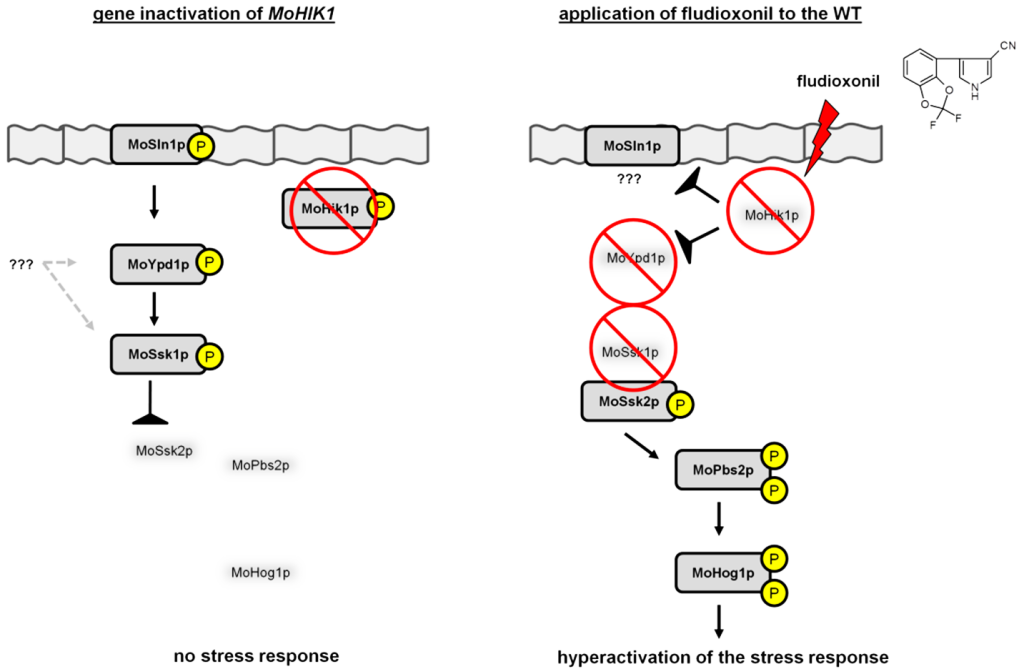 Fig. 1. Comparison of the signal transduction in the Magnaporthe oryzae HOG signaling cascade in the mutant strain ΔMohik1 and in the WT after application of fludioxonil. After a single disruption of MoHik1p the phosphorylation pattern of MoYpd1p and MoSsk1p can be partly rescued by MoSln1p. The response regulator MoSsk1p is phosphorylated under normal environmental conditions and the MAPK cascade MoSsk2p-MoPbs2p-MoHog1p is inactive. Fludioxonil treatment leads to inhibition of MoHik1p and a subsequent dephosphorylation of all the signaling components of the phosphorelay system results in a complete dephosphorylation of MoSsk1p. Therefore, the MAPK cascade MoSsk2p-MoPbs2p-MoHog1p is hyperactivated and that results in lethality

This signal cascade comprises a signal sensory system (a phosphorelaysystem) linked to a signal transferring system (a MAPK cascade) and is extensively studied in the model yeast Saccharomyces cerevisiae. In pathogenic fungi the HOG pathway differs accordingly and is yet not well understood. In this research article we provide new findings concerning the HOG pathway and thus adaptation to high osmolarity in the rice blast fungus Magnaporthe oryzae as a model for filamentous phytopathogenic fungi. We investigated a yeast YPD1-homologue and its role concerning signal transfer within the phosphorelay system of the HOG pathway. This study is the first functional analysis of an YPD1-homologue in filamentous phytopathogenic fungi to date. It was found that MoYpd1 is involved in osmoregulation, pathogenicity and the mode of action of the commercial fungicide fludioxonil in M. oryzae. Thereby, we improved the mechanism of fludioxonil action since we addressed the question why the group III histidine kinase MoHik1p is accepted to be the target protein but gene inactivation of MoHIK1 is not lethal in M. oryzae.

The difference between the mode of action of fludioxonil and the gene disruption of MoHIK1 can be explained as follows. In case of a single inactivation of the target protein MoHik1p due to gene disruption, the resulting mutant strain is viable because the phosphorylation pattern of MoSsk1p can be maintained by MoSln1p and MoYpd1p or even by unknown factors (Fig. 1 left).

Based on (yeast two hybrid) interaction of the two histidine kinases MoHik1p+MoSln1p, fludioxonil action could be explained by inhibition of MoHik1p through fludioxonil followed by subsequently inhibition of MoSln1p. Therefore, the phosphorelay system should be strong affected and inactivated. As a consequence MoSsk1p is dephosphorylated and therefore hyperactivation of MoHog1p causes cell death (Fig. 1 right).