Our biological clock controls mitochondrial activity in a tissue-dependent manner

Mitochondria are the cell organelles that are responsible for the largest part of cellular energy production. Within these organelles both the tricarboxylic acid cycle (TCA cycle) and oxidative phosphorylation (OXPHOS) are taking place. In these cycles ATP, the universal source of cellular energy, is produced. As energy demand (and thus ATP demand) is highly dependent on the activity and feeding behavior of an organism it can be expected that mitochondrial energy production can be fine-tuned to match the cellular energy demands. This fine-tuning can be established by increasing/decreasing the number of mitochondria per cell through mitochondrial biogenesis and mitophagy, respectively, but another method used by cells is the formation/deformation of extensive mitochondrial networks through fusion/fission of individual mitochondria. 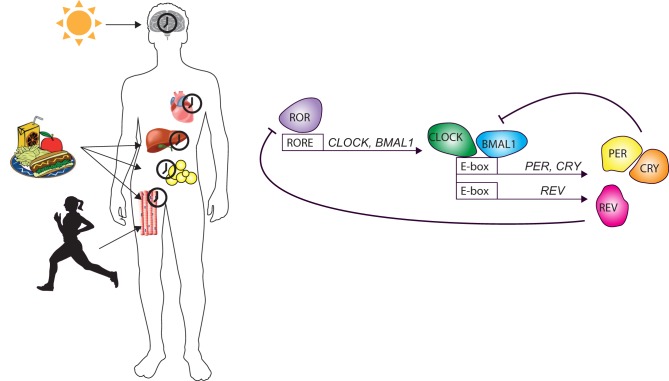 Fig. 1. The molecular circadian clock and tissue-specific clocks in the body. CLOCK and BMAL1 form a heterodimer that binds to E-box regulatory sequences PER/CRY and other genes. PER and CRY form a repressor complex, which inhibitsCLOCK-BMAL1 when sufficient levels are reached. The second feedback loop involves nuclear orphan receptors, which bind to the retinoic acid-related orphan receptor response elements (ROREs) in CLOCK and BMAL1 regulatory sequences. Retinoid-related orphan receptor (ROR) activates transcription of CLOCK and BMAL1. The CLOCK-BMAL1 complex induces transcription of REVERBA and REVERBB (REV), which subsequently compete with ROR, in order to inhibit transcription of CLOCK and BMAL1. Circadian clocks exist in almost every cell and exhibit tissue-specific rhythmicity, orchestrated by the central circadian clock in the suprachiasmatic nucleus. Synchronization takes place via neural, hormonal and behavioral signals. (de Goede P et al., 2018)

Generally speaking the changes in activity and feeding behavior of an organism are dependent on food availability, which often coincide with the changes in the light/dark-cycle caused by the rotation of the earth. Therefore, these changes are highly predictable and virtually all organisms studied thus far have evolved an internal timekeeping system to help them anticipate these predictable daily changes in the environment. This timekeeping system is called the biological clock or circadian clock (circa dies, Latin for “approximately a day”). On a molecular level the circadian clock consists of transcriptional and translational feedback loops with both gene expression promoting and inhibiting feedback mechanisms to ensure correct looping of the clock in approximately 24 hours, whilst also allowing for flexibility if environmental factors are changing (e.g. seasonality) (Fig. 1). However, within different tissues the molecular clocks often respond differently to environmental changes. For example, especially the liver clock is affected by changes in feeding behavior, more so than the clocks in muscle or adipose tissue.  In the present review we summarized the findings that link the biological clock to mitochondria, with an emphasis on mitochondrial morphology, respiration and redox homeostasis.

In order to determine if a specific biological function, such as mitochondrial activity, follows a daily rhythm and whether this pattern is disturbed or not, measurements (i.e., blood samples, tissue biopsies, temperature recordings, etc.) are taken at several time points along the 24h cycle. Many studies confirmed that in different tissues various processes involved in mitochondrial functioning indeed show a daily rhythm. For example, genes important for mitochondrial biogenesis, mitophagy, fission and fusion appear to be under control of the biological clock (Fig. 2). Also proteins and metabolites important for redox homeostasis show clear daily rhythmicity. Furthermore, several genes involved in OXPHOS as well as mitochondrial respiration itself have been found to be time-of-day dependent.  Global KO of either Bmal1 or Per1/Per2 resulted in decreased mitochondrial respiration in respectively muscle and liver, illustrating the tissue-dependent effects of the molecular clock on respiration. With the recent advances in tissue specific gene knock-out (KO) models it has become relatively easy to study the effects of deleting or disrupting specific parts of the molecular clockwork in a tissue-specific manner. Tissue-specific KO of Bmal1, one of the main clock genes, decreased mitochondrial functioning in several tissues, including liver, muscle, heart and pancreas. Conversely, knockdown of Cry1, Cry2, Per1 or Per2 (all 4 genes that inhibit Bmal1 expression) increased mitochondrial functioning in a liver cell line. It thus seems crucial to disrupt different parts of the molecular clockwork in a tissue-dependent way in order to get a clear view on the effects of circadian disruption on mitochondrial functioning. 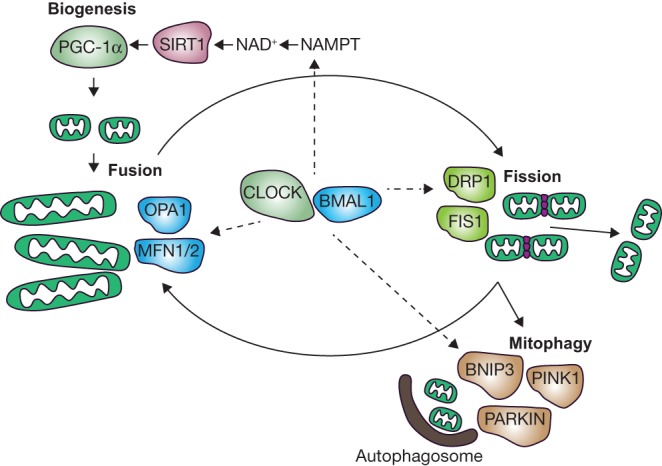 Concluding, many mitochondria related processes are under control of the circadian timing system, but additional research is necessary to provide more insights into the exact functioning of the different parts of the molecular machinery in a tissue-specific approach.