The p53 gene is a human tumor suppressor which is involved in cell cycle regulation. It has an efficient ability to inhibit cell proliferation, by both blocking cell cycle progression and promoting apoptotic cell death in order to inhibit cancer development.

We have previously shown that over-expression of the human tumor suppressor protein P53 causes cell death of the yeast Saccharomyces cerevisiae, with a high phenotypic similarity with mammalian cells. P53 overproduction led to transcriptional down regulation of some yeast genes, such as the TRX1/2 thioredoxin system, which plays a key role in cell protection against various oxidative stresses induced by reactive oxygen species (ROS) and involved in many cell process. 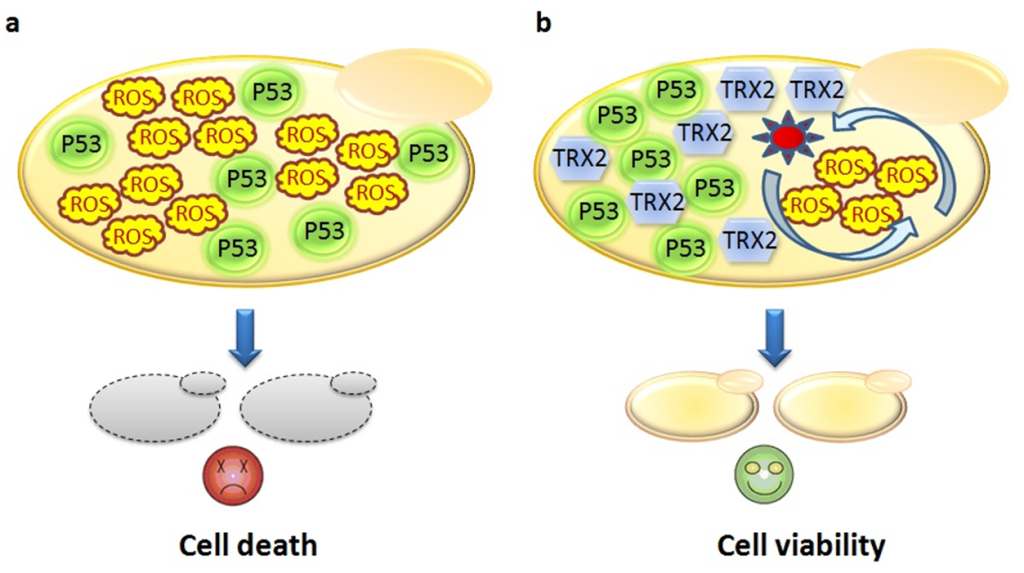 Schema of the results of the cell yeast transformation by the human tumor suppressor p53 gene alone and cell transformed by both p53 gene and TRX2 yeast gene. The yeast cell expressing the human gene p53 lead to reactive oxygen species (ROS) accumulation and finally cell death by apoptosis (a). While, the yeast cell expressing both human p53 gene and yeast TRX2 gene, were resistant to the ROS effect by scavenging ROS via antioxidant system conferred by TRX2 resulting to the cell viability (b).

In our work, the impact of TRX2 over-expression on p53-mediated apoptosis in yeast is investigated. The human gene p53 was over-expressed together with the thioredoxin 2 (TRX2) yeast gene in the same yeast cells. We showed that TRX2 overproduction reduced the apoptotic effect exerted by P53 and increased by 5 times the viability of the P53-overproducing cells. Indeed, 78% of viable cells that expressing both P53 and TRX2, versus, 16% of viable cells expressing just only the P53.

We proved that the TRX2 protein acted probably through its increased detoxifying activity on the P53-generated ROS, without affecting the steady-state level and activity of P53, where TRX2 was accumulated in yeast cells.

In order to further confirm these results, we have treated yeast cells by the N-acetyl cysteine (NAC) antioxidant.

A partial suppression of the growth inhibitory effect of P53 was observed. All finding strengthen the idea that over-expression of a single yeast gene (TRX2) decreases the p53-mediated cell death by decreasing ROS accumulation.