Stem cells are the cells that are responsible for the maintenance of tissues and organs by replacing functional cells with a limited life-span or that are damaged beyond repair. Over the last decades stem cells have been shown to act as a powerhouse of many of adult tissues, such as hematopoietic system, intestinal lining, liver, pancreas and salivary gland. However, ageing may eventually lead to reduced functioning of tissues making elderly individuals usually less capable to repair injuries compared to young individuals. In many elderly people salivary gland dysfunction with consequential dry-mouth syndrome (Xerostomia) is a major complaint which commonly results in reduced oral health with, e.g., an increased chance on aspiration pneumonitis. Understanding why in aged subjects the stem cells do not appear to maintain and restore the salivary glands may allow novel approaches of interventions aiming for a higher quality of life of senior people. 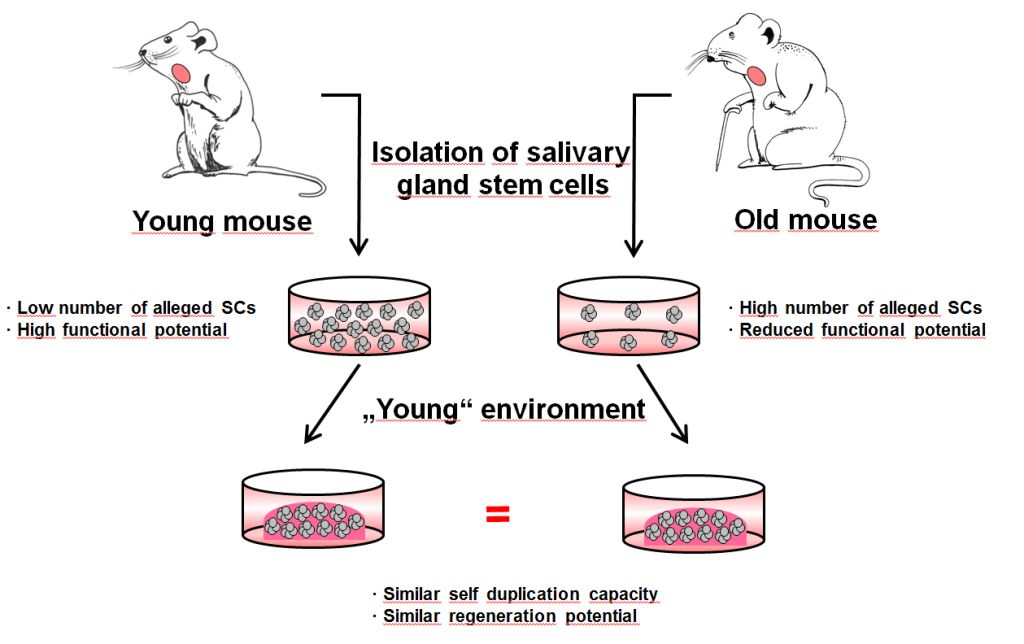 Prior to this study, we showed that aged salivary gland cells exhibit diminished surrogate regenerative potential when cultured outside the body in the laboratory. More recently, we observed that a certain group of cells when selected from young cultured salivary gland tissue and expressing high levels of specific membrane markers known to be manifested on stem cell-like cells in glandular tissues are highly enriched for stem cells. Remarkably, these cells are capable of immense self-renewal – a process by which stem cells divide to make more stem cells, can be expanded and are able to differentiate into “organoids” mini-salivary glands containing every salivary gland cell type. Therefore, in this paper we studied the effects of aging on salivary gland stem cell function using self-renewal capacity and regeneration potential subsequent to transplantation as a read-out of stem cell function.

First, we observe an increased number of alleged marker expressing salivary gland stem cells residing in old mice, which in contrast to what is expected could indicate an increase in stem cell number. This is an interesting observation because the role of stem cell numbers in the effects of aging on tissue function and regeneration vary widely across different stem cell populations and is a commonly debated topic. However, when these alleged stem cells were isolated from aged salivary glands they exhibited a reduced functional potential when compared young glands. Interestingly, when we grow the remaining stem cells in a laboratory setting while adding proper combination of stimulants they hold similar self-renewal and regeneration potential as their young counterparts. This observation is particularly intriguing because it implies that the functional changes that occur in stem cells as they age are potentially reversible when placed in a ‘young’ microenvironment. However, these observations give rise to an increasing number of new questions: for example, what are the signals and mechanisms that lead to altered stem cell functionality in aging? Or; how can fresh stimulants overcome harmful DNA damage, changes in gene expression unrestricted to DNA sequence (epigenetics) or metabolic and mechanical stresses that pile up within the cell over time? It is evident that an increasing amount of research needs to be done before these questions can be answered.

In conclusion, our findings suggest that the aging of salivary gland stem cells may be a process induced by environmental factors yet unknown whereby a potentially perfect functional stem cell is instructed to behave in a dysfunction manner.